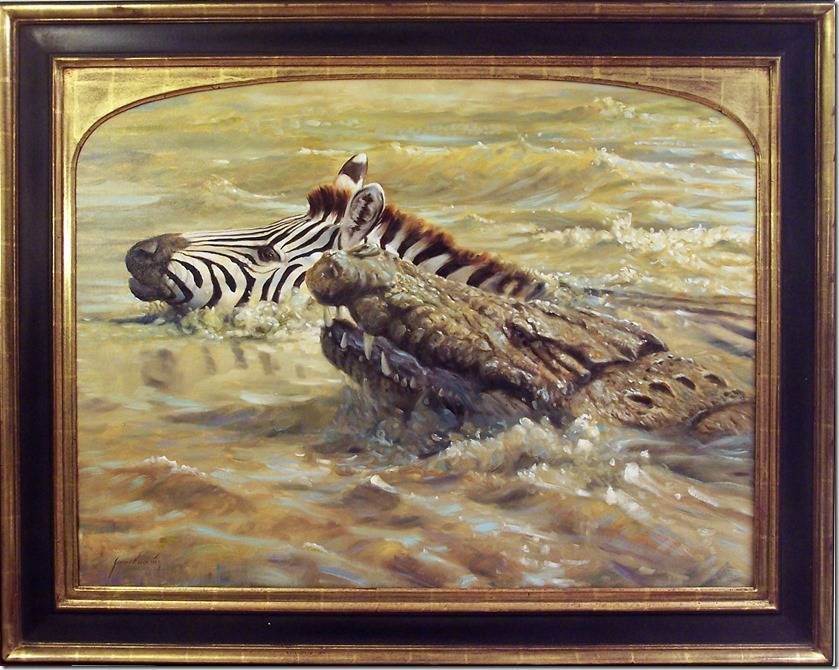 Special to the Pahrump Valley Times "Dangerous Crossing" by Grant Hacking. He was born in Petersburg, South Africa and traveled extensively with his artist father while developing a keen eye for detail. 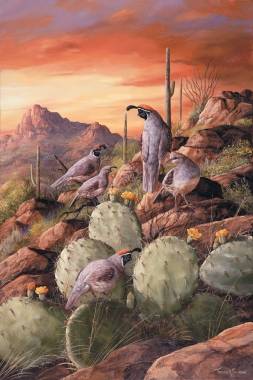 Special to the Pahrump Valley Times Painting by Trevor Swanson. Swanson has the unique ability to translate on canvas the true Arizona landscape and wildlife. 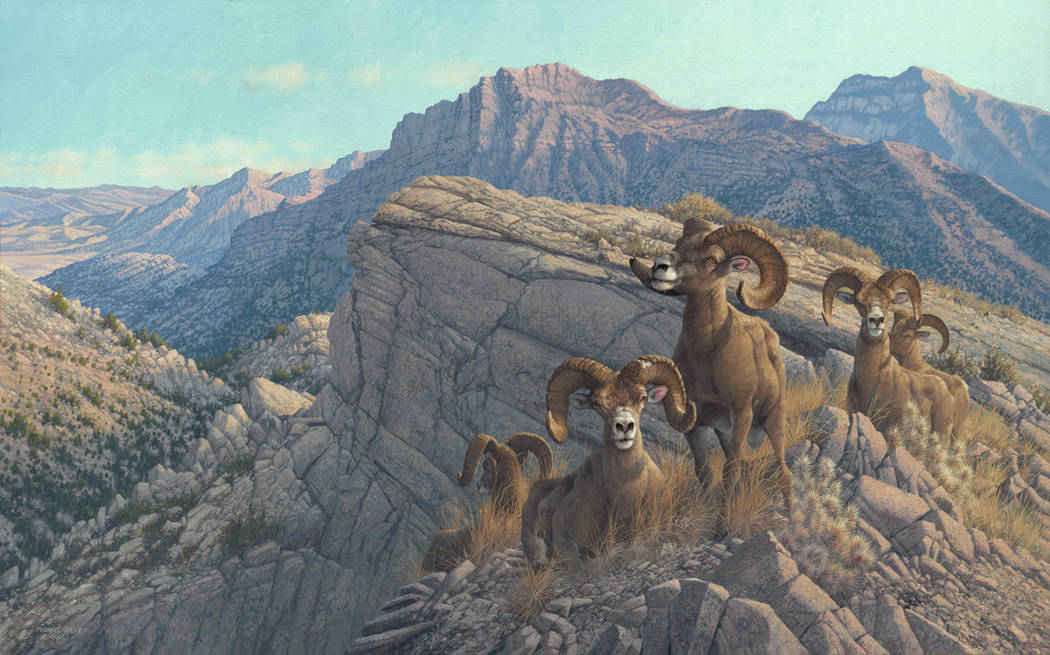 Special to the Pahrump Valley Times "Desert Kings" by Michael Sieve. In his column, Dan Simmons explains what inspired this painting. 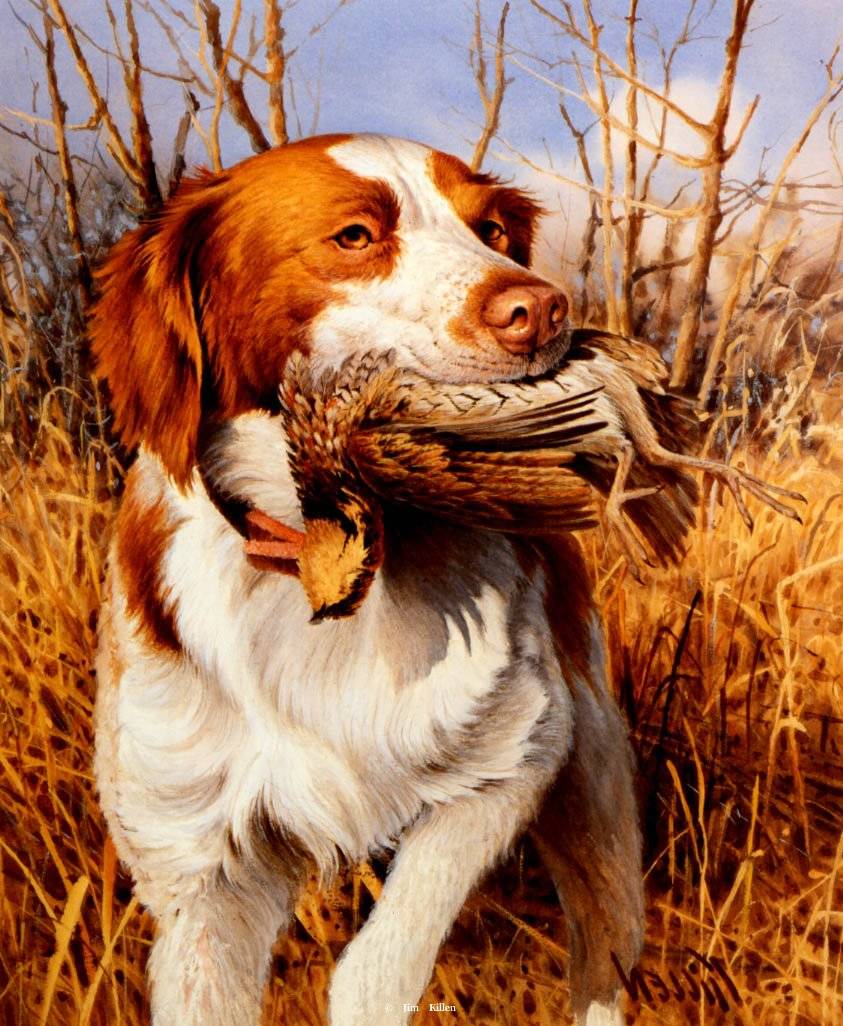 Special to the Pahrump Valley Times A painting of a Brittany Spaniel hunting dog by Jim Killen. Killen is a master of depicting the sporting dog. 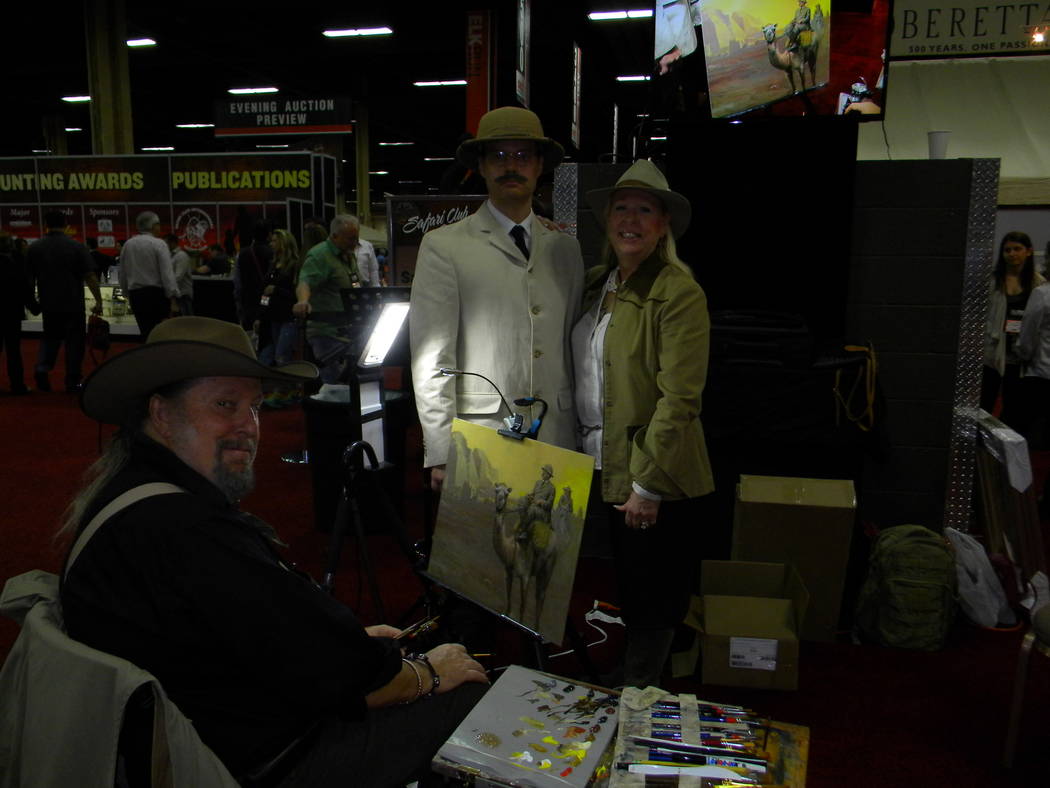 Special to the Pahrump Valley Times Theodore Roosevelt by John Seerey-Lester. Seerey-Lester is among the wildlife artists who have attracted the attention of columnist Dan Simmons.

I feel fortunate that I’ve been able to spend much of my life in outdoor adventures as a game warden, wildlife biologist, hunting-fishing guide and researcher. However, some are able to take the adventure to a whole new level. Grant Hacking is one of those.

There is certainly art and skill developed by proficient and experienced hunters and fishermen, but Grant’s skill is to put his experience and adventures on canvas in such a way that we can all feel the excitement as if we were there.

I first met Grant at the Safari Club International (SCI) convention in Las Vegas. I was stopped in my tracks by a crocodile attacking a zebra.

His painting “Dangerous Crossing” was so real I could see the terror in the zebra’s eyes and the determination of the crocodile.

He had not yet gotten hold of the zebra which has a fair chance of getting away. You and I get to finish the story in our imagination. We are there, or would like to be, or it’s possibly a place we would not like to be due to caution or fear as the adrenalin rushes from the canvas. This is true adventure art.

Grant was born in Petersburg, South Africa and traveled extensively with his artist father while developing a keen eye for detail. Traveling on Lake Kariba in Zimbabwe he watched crocs going after Waterbuck; they often missed, but sometimes got lucky. This was the inspiration for the painting.

He also traveled throughout Tanzania and Mozambique where the fact that animals are what feed us and keep us alive was reinforced. This has been the case since our Stone Age ancestors first learned to hunt and continues to this day.

Like many fine wildlife artists, Grant is a gun and outdoor enthusiast supporting the International Wildlife Crime Stoppers, SCI, and many others with his donated paintings.

Other wildlife artists that have stopped me in my tracks while at conventions, exhibits or in someone’s home are John Seerey-Lester’s depictions of historic Theodore Roosevelt’s exploits; Michael Sieve, his “The Ivory Hunter,” a depiction of an early elephant market hunter and “Desert Kings” are two of my favorites.

“Desert Kings,” I’m honored to say, was inspired by the sheep we found when we later visited the site at the exact location where my Desert Bighorn was taken.

Michael is an excellent sportsman, conservationist, and friend; Trevor Swanson, who has the unique ability to translate on canvas the true Arizona landscape and wildlife; and of course Jim Killen, who is a master of depicting the sporting dog.

Standing before one of his paintings I wanted to own that dog. I see myself standing over him as he points, shoot over him as bobwhite quail explode from a thicket and cover them, squeeze the trigger and imagine the perfect thought. In all cases I’m there, in the moment, all due to the skill and talent of a special artist. Again, this is wildlife art at its best.

Do yourself a favor; give yourself a gift and see the work of these artists online.

For information go to www.granthacking.com, www.seerey-lester.com, www.trevorswanson.com and www.killencollection.com Information 0n Sieve can be found on Facebook under “Michael Sieve – Art Dealer”

If you have an adventure, a story or a comment give Sportsman’s Quest columnist Dan Simmons a call 775-727-9777 or e-mail him at dansimmons@usa.net