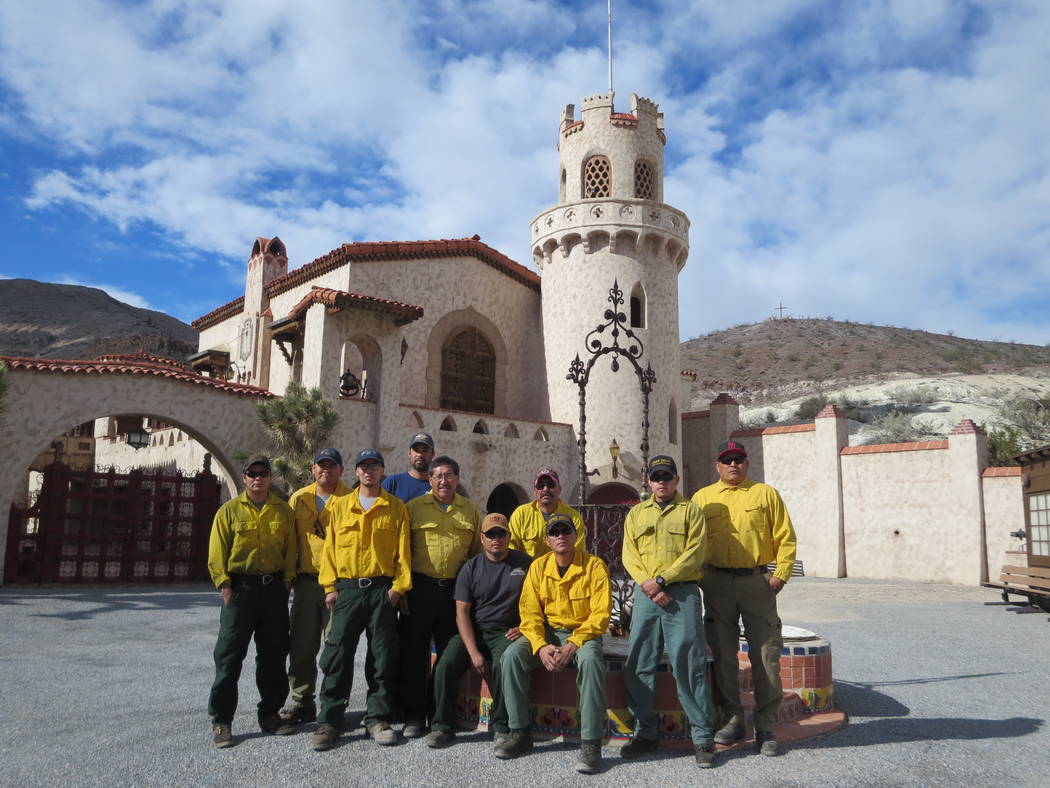 A National Park Service crew from Mesa Verde National Park helped remove mud from inside and around the historic buildings at Scotty’s Castle. Special to the Pahrump Valley Times

People who want to see the damage that was wreaked on Death Valley’s historic Scotty’s Castle by flash flood in October 2015 and the ongoing restoration will soon have an opportunity to do so.

Death Valley National Park officials said in a press release that they will offer a limited number of tours at Scotty’s Castle this spring.

Scotty’s Castle flood recovery tours will be offered twice a day on March 5, March 12, March 19, March 26 and April 2. The tour will cost $25 per person, last two hours and involve walking on uneven surfaces, officials said in a press release. Children younger than six will not be allowed to tour the place.

Scotty’s Castle and Grapevine Canyon have been closed to the public since the flash flood occurred in October 2015. With the exception of the tours, the area will remain off-limits to the public until repairs are completed. It is likely to be reopened in late 2019 or early 2020, officials said in a press release.

Scotty’s Castle is a historic district clustered near a lush spring in the north end of Death Valley National Park. Millionaire Albert Johnson built Scotty’s Castle as his personal retreat in the 1920s. His friend Death Valley Scotty claimed it was his castle and claimed to have financed it with a gold mine in the basement. The two men met because Scotty conned Johnson out of thousands of dollars.

Over three inches of rain fell on the hills surrounding Scotty’s Castle in just five hours on Oct. 18, 2015. The resulting flash flood caused significant damage to the interior of the visitor center and the hacienda. Almost a mile of water line, over 25 electrical poles, the septic system, and huge sections of eight miles of road were washed away.

The National Park Service has marked several milestones in the flood recovery effort since then, officials said. Hundreds of miles of roads across the park were cleared of debris and reopened.

In addition, an access route to Scotty’s Castle for construction vehicles was created. Mud and debris were removed from the historic buildings, walkways and swimming pool. A temporary water line now supplies water to the historic district’s fire suppression system. Electricity has been temporarily restored to most buildings.

Over the next couple of years the National Park Service plans to repair the damaged water reservoir, replace the nearly mile-long water line, replace the septic tanks and leachfield, finish repairs to the electrical distribution system, rebuild the road, repair several buildings, install interpretive exhibits, bring the museum collection back to the main house, and dozens of other projects.

Before the flood, about 120,000 people per year visited Scotty’s Castle. The total cost of recovering from the flood is estimated at $48 million, officials said.

More information about tours is available at www.dvnha.org. Each tour is limited to 13 participants and advance reservations are required. Call 1-800-478-8564, ext. 10 to make a reservation.