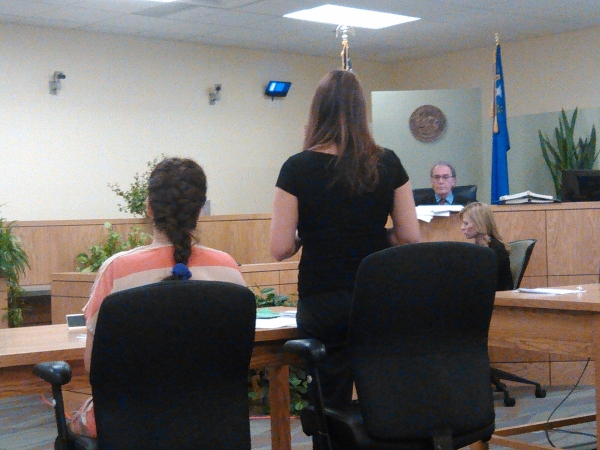 Maria Furtado, charged with orchestrating the shooting death of a neighbor’s dog, will head back to Pahrump Justice Court following a ruling from Fifth District Court Judge Kim Wanker on Friday.

Furtado’s defense attorney, Lisa Chamlee, convinced Wanker that additional witnesses should testify under oath in order to understand the full account of both sides.

During an early September hearing, Kent bound Furtado over to answer the allegations that she shot the neighbor’s dog in front of her two sons, aged 3 and 15 years old, after learning the dog killed one of her pet ducks.

Prosecutors contend Furtado put her boys in danger as a result of her alleged actions during last month’s pretrial hearing.

“We didn’t hear any testimony from the child that my client pointed the gun at him or the 3 year old,” she said. “There was nobody’s life that was in danger, so I would ask the court to discount the charge on count three because there was no evidence to support that charge.”

On Friday, Chamlee argued that additional witnesses need to tell their side of the story, after prosecutors rested following the boy’s account of the events.

Those witnesses included officials with Nye County Animal Control and Furtado’s husband, who reported the crime after Furtado’s son told him what had occurred.

During last month’s hearing, the 15 year old’s testimony was enough to convince Kent to bind the case up to district court, much to the chagrin of Chamlee, who pleaded with Wanker on Friday to remand the case back down to justice court.

Additionally, Chamlee had concerns the 15 year old’s testimony may have been influenced by the boy’s father at the time.

“When I was cross-examining the witness, I had several questions and some of the responses elicited by the witness was cause for me to be concerned with possible coaching,” she said. “My client has shared with me information about the history of this man and I have some concerns that there may be undue influencing placed on this child who testified.”

Following further discussion, Wanker remanded the case back to Pahrump Justice Court for additional testimony from the witnesses.

Furtado was arrested Sunday, Aug. 9, three days after she allegedly removed a neighbor’s six-month-old dog from a leash in their yard, drove with her sons into the desert where investigators say she shot the dog twice before telling her older son to finish off the still-alive canine.

She was arrested on a felony warrant for animal cruelty, two counts of neglect/child abuse, and petit larceny.

Days later, prosecutor Patrick Ferguson amended the original complaint and added charges of torturing, maiming, mutilating or killing an animal with the use of a deadly weapon or with the assistance of a child.

According to the arrest report, Furtado shot the dog after it allegedly killed a duckling she owned.

The report stated the 15 year old told police that Furtado removed the puppy from the car holding a pistol and told him to walk his younger brother away to distract him from the alleged act.

The 15 year old also told police that when he and his mother got back to the car, the 3 year old was overheard saying “gun shoot dog,” which police said the child had witnessed the shootings.