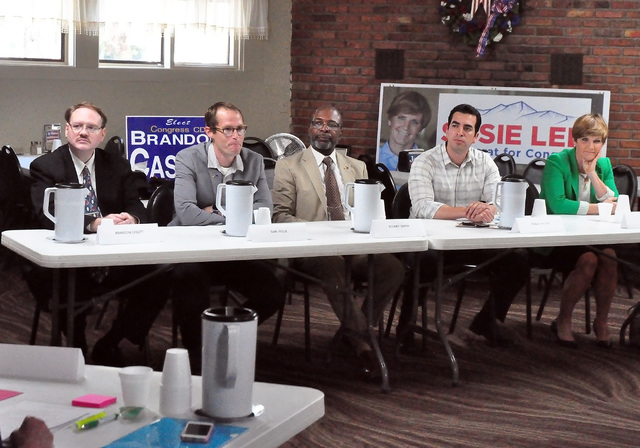 The five of the eight Democratic candidates for Nevada’s 4th Congressional District descended on Pahrump on Thursday in their last attempt to court Nye County voters ahead of early voting.

The Nevada 4th Congressional District race is expected to be one of the most competitive races in this primary’s season as Democrats are looking to regain the control of the seat that was taken by Republican Cresent Hardy in a surprise victory over Democrat Steven Horsford in 2015.

“I’m running for Congress because Nevada needs someone who is not afraid to stand up, speak out and fight back in Washington,” Flores said in a statement.

The five candidates talked about a number of issues in Nevada’s Congressional District 4, such as infrastructure and rural Nevada’s potential for renewable energy.

“I think with renewable energy, the state of Nevada has the opportunity to be at the top of the good list,” Lee said.

She said the recent decision by the Nevada Public Utilities Commission to change the net-metering tariff for rooftop solar customers is an “abdication of responsibility” by the Legislature.

Additionally, Lee said the state has an opportunity for drone technology.

In 2013, Nevada was selected as one of six states where the FAA could test unmanned drones in civilian airspace.

“I think we need to continue to give companies incentives to invest in renewable energy here, in Nevada,” Lee said.

Candidates also talked about immigration reform and their support for citizenship for DREAMers, young immigrants with temporary legal status through the federal Deferred Action for Childhood Arrivals (DACA) program.

Rolle called for changing the dialogue on immigration.

“We have to stop the dehumanizing dialogue that’s happening in our country,” he said.

Smith said many of those who come to the United States may not necessarily become citizens but just want to work.

“We really need to determine as of now, who do we want here, how do we want to bring them in here and is our system to bring them here as effective and as efficient as it should be,” he said.

Kihuen whose campaign was endorsed by former President Bill Clinton as of Tuesday said he supports immigration reform and the path to citizenship.

“There’s a reason why there’s an American dream. There’s no such thing as a Mexican Dream or Canadian Dream. There’s the American Dream, and we have to allow that opportunity for those who are willing to work hard for it,” Kihuen said.

Lee said Democrats and Republicans should work together on the immigration issue.

“Nevada is ground zero for the need for comprehensive immigration reform,” she said.

Each candidate also pledged to pay visits to Pahrump on a regular basis, if they get elected. Casutt said he wants to establish a liaison with veterans. Smith promised to create a “constant dialogue.” Lee said she would pay quarterly visits to the town.

“We need to make sure that there’s proper funding, it needs to be a priority,” Casutt said.

“We need to have some type of whistle-blower program in our VA to help us get rid of some of those inefficiencies and ineffective people who are currently working and we need to increase the percentage of people who are veterans that are actually working at VA,” Smith said.

Kihuen called for “streamlining the process” for veterans to get benefits and apply for benefits.

All candidates criticized privatization of a veteran’s administration.

Kihuen said he will fight “tooth-and-nail” to make sure that veteran services are funded to the levels when President Obama first took office.

The five candidates spoke harshly about the Republicans’ opposition to the nomination of Judge Merrick Garland as Supreme Court justice.

“This is not an unprecented move. This is a political move by the Republicans who control Congress right now to not allow the president to make an appointment,” Kihuen said about the Republican opposition to Garland’s nomination.

Lee said the Republican opposition to the SCOTUS nomination was “a prime example of the dysfunction in Washington, D.C.”

She also added that Nevadans should elect former attorney general Catherine Cortez Masto as their next U.S. Senator.

Early voting starts on May 28 with the primary on June 14.