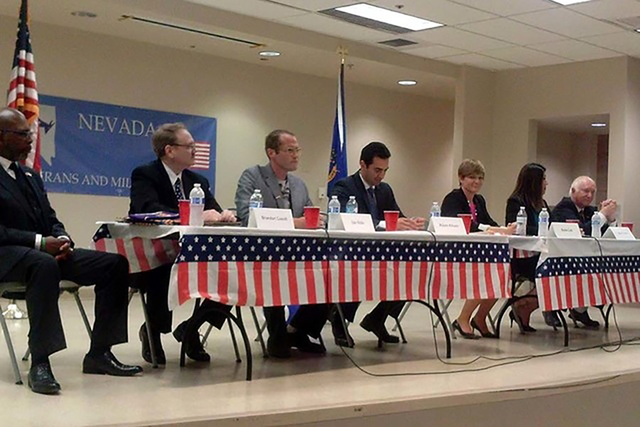 NORTH LAS VEGAS — They debated the Iran deal, campaign finance reform and whether Edward Snowden is a traitor.

The Democratic nominee after the June 14 primaries is expected to face U.S. Rep. Cresent Hardy, R-Nev., who is running for a second two-year term. Two other Republican candidates are running: Wayne Villines and Mike Monroe.

The race could tilt to either side. Hardy was elected in 2014, winning in a red wave in which Republicans seized control of both chambers of the statehouse and won state offices.

Democrats have the edge in voter registration and aim to regain the seat.

Candidates disagreed about the Iran deal, which aims to keep Iran from developing a nuclear weapon and will provide the nation with $150 billion by lifting sanctions.

Ruben Kihuen, a state senator, said he supports the deal, which he said had the support of five of the most powerful countries in the world.

“I think that Iran has been an exporter of terrorism and has been a major destabilizer in the Middle East,” Lee said.

Flores, a former assemblywoman, agreed with Kihuen, saying Iran was in a position to acquire nuclear-grade uranium.

Lee said Snowden is both a traitor and not a traitor, given the circumstances. Flores said the case demonstrates the need for whistleblower protections.

Rolle told the audience they deserve “politicians who will answer the damn question.”

The government was spying on us, he said, declaring: “Edward Snowden is a hero.”

Smith, an Air Force veteran, said he’s worked in classified jobs and Snowden could have been a whistleblower and done it legally.

Kihuen, Lee and Flores have been campaigning since last year.

The opportunity gave lesser-known candidates a chance to introduce themselves.

For example, Schaefer told the group he’s for storing nuclear waste at Yucca Mountain, claiming it will create 5,000 jobs and allow each state resident to get an annual $1,000 check.