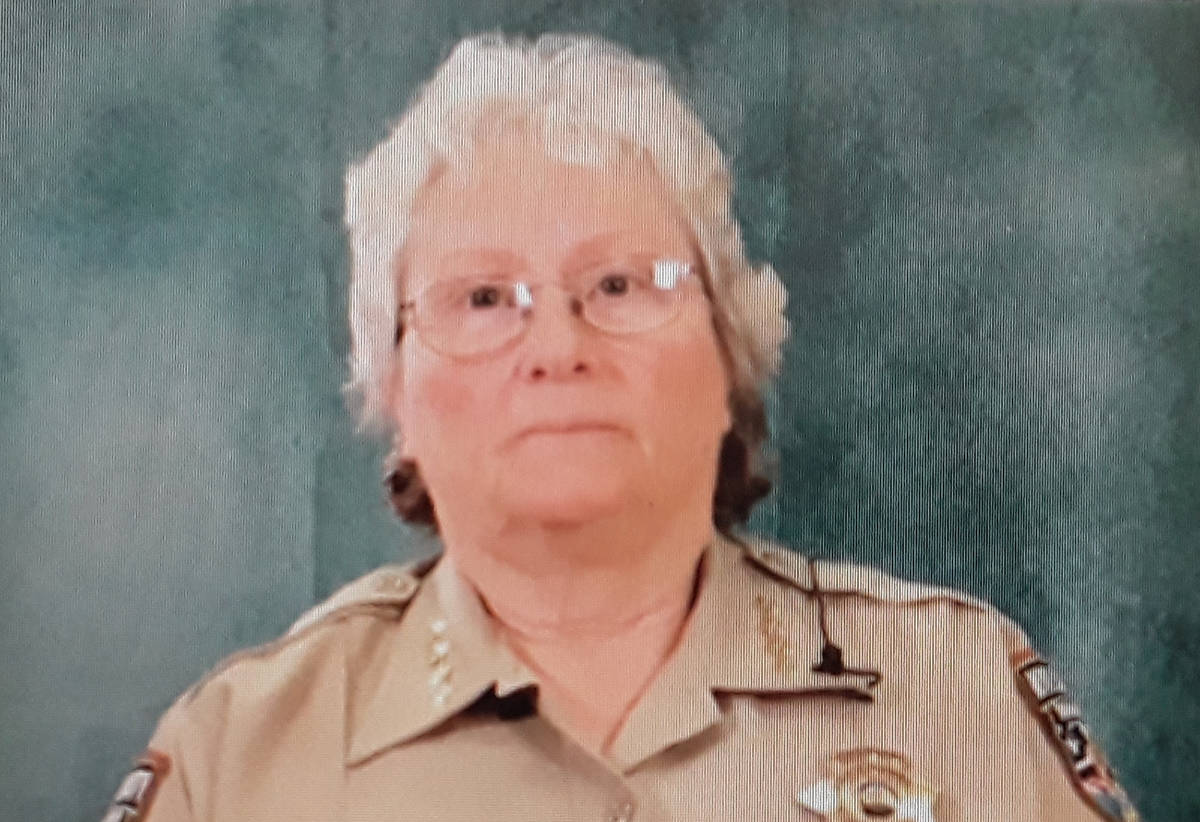 Special to the Pahrump Valley Times Nye County Sheriff Sharon Wehrly held a press conference on Friday March 27, in regards to an officer involved shooting where a suspect was killed after firing on Nye County Detective Bryan Cooper. 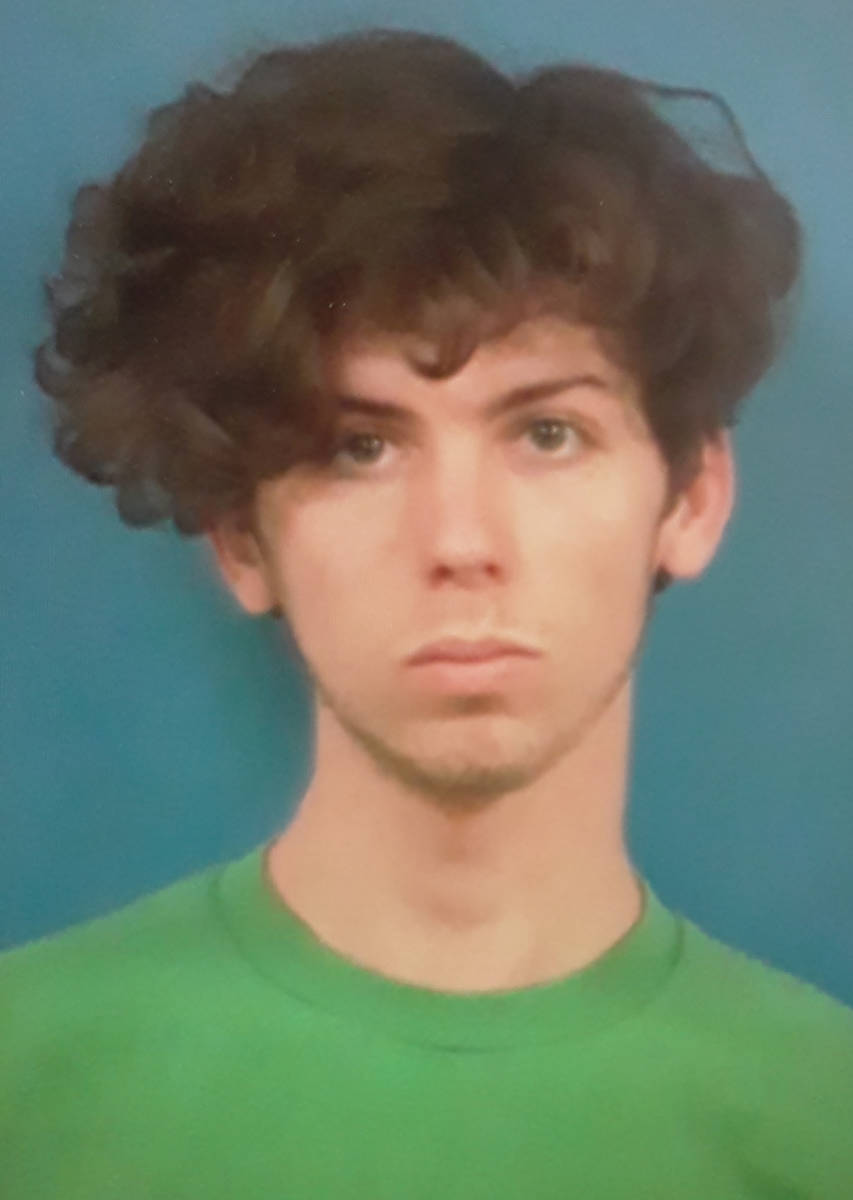 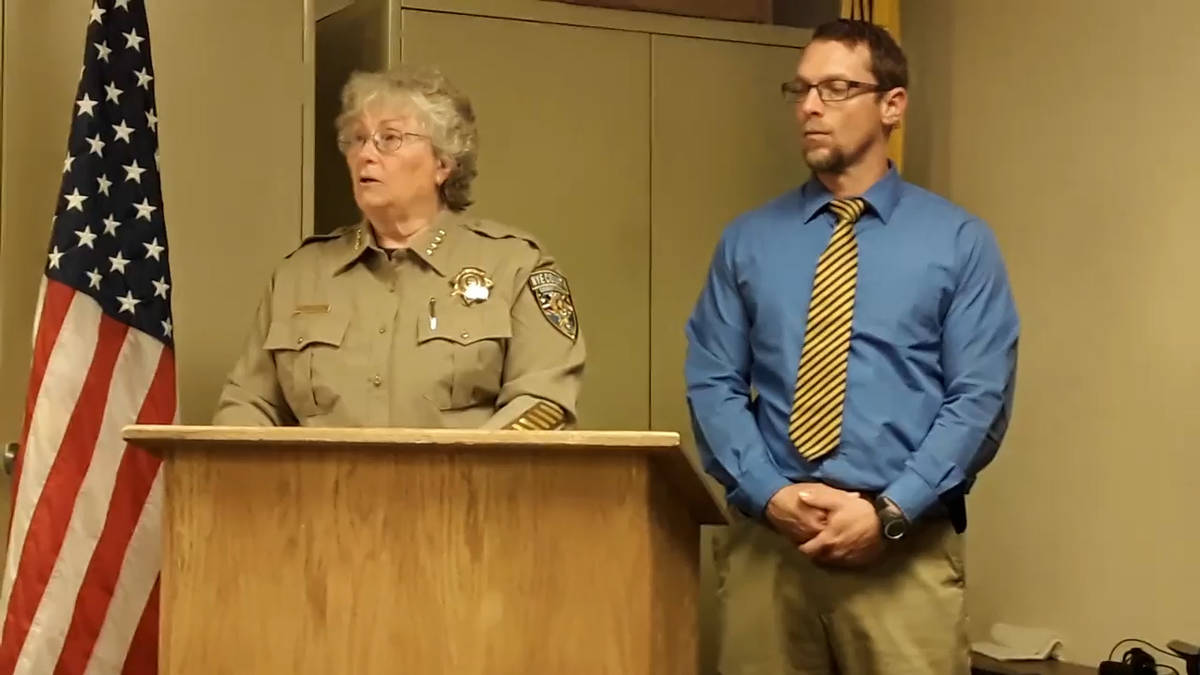 A Nye County Sheriff’s Office detective is recovering after being shot while investigating a stabbing.

During a press conference on Friday, March 27, Sheriff Sharon Wehrly provided details on the shooting, which occurred Wednesday evening, March 25, at a residence located on Warehouse Road, where the suspect, identified as Pahrump resident Matthew Moore, 19, was killed during the exchange of gunfire.

The detective was identified as Bryan Cooper, a 5-year veteran with the sheriff’s office.

Wehrly said Cooper and fellow Detective Logan Gibbs, an 11-year veteran, are both assigned to the street crimes, narcotics and gang unit.

“On March 25th at approximately 9:43 p.m. the Nye County Sheriff’s Office dispatch received a 911 call regarding a stabbing that had just occurred at the address on Surrey Lane,” Wehrly said. “Detectives interviewed the person on scene and learned that the suspect in the stabbing was Matthew Moore. The investigation revealed that Moore attempted to rob the victim of the belt he was wearing by knifepoint. During the robbery attempt, Moore cut the victim’s neck with a knife. A records check indicated that Moore had a violent history with law enforcement, to include a past prior arrest for robbery. Detectives learned that Moore resided on Warehouse Road. Detective Gibbs and Cooper went to the Warehouse Road address to interview Moore regarding his involvement in the attempted robbery that occurred on Surrey Lane.”

Wehrly went on to say that Moore pointed the Mossberg model 500, 12-gauge pump-action shotgun with a pistol grip, and fired a round at Cooper over his mother’s left shoulder, striking Cooper in the chest.

During the encounter, Wehrly said Cooper was able to return fire, where he fired two rounds from his duty-issued handgun, however, Cooper’s gunfire was ineffective in stopping Moore.

The entire incident was captured on both of the detectives’ body-worn cameras, as well as a surveillance camera at a residence across the street from the home.

Wehrly played the footage during the press conference, where Gibbs was heard informing Nye County dispatchers that “shots were fired and an officer was down.”

“This video shows you more clearly, Moore’s execution attempt of Detective Cooper, just before Detective Gibbs’ returned fire,” she said. “During the investigation, we identified that Moore had several anti-law enforcement Facebook posts. One of the posts is shown here, where Moore advocates the shooting of law enforcement during a traffic stop. Additionally, a video was located on his social media page in which Moore was utilizing a shotgun, shooting a pile of rubbish on the ground, in a similar manner that is witnessed on the body-worn cameras, as he advances and shoots Detective Cooper.”

Wehrly also noted that Moore’s mother was cooperative during the aftermath of the investigation.

“As you listen to his body-worn camera, you hear her beg Moore to stop advancing on Detective Cooper,” Wehrly said. “Our thoughts and prayers are with her and her family during this trying time.”

The incident marks the second officer-involved shooting for the year.