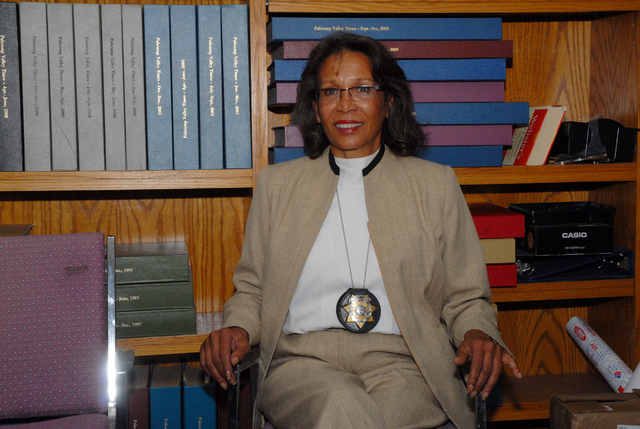 Deputy Public Administrator Robin Dorand-Rudolf said her office does everything according to the law handling the estates of residents who die unattended deaths.

Dorand-Rudolf has filed to run for the public administrator job.

She says she personally knows a lot of her cases, she’s been a Pahrump resident since 1990 and formerly owned Neptune Society of Nye County from 1993 to 2005. She retired and drove around the U.S. in a motorhome with her husband, but decided after four months she wanted to return to Pahrump.

When former Nye County Facilities Manager Bob Jones was elected public administrator in November 2006 he asked her to join him as a deputy.

Current Public Administrator Falkon Finlinson didn’t file to run for re-election to a second term. Public administrators in Nevada counties under 100,000 population aren’t paid; state statute mandates they are paid 4 percent of the first $15,000 of an estate they handle, up to 3 percent for up to $85,000, then 2 percent for estates valued at larger than that. Dorand-Rudolf said they are only called into service if there is an unattended death with no relatives around, a 24-hour, 365-day job.

“The majority of our cases are well under that $100,000 mark but as far as the dollars go, if you can afford to do this kind of work and not get a paycheck for six months — if I had to rely on this to make a car payment or a mortgage payment for six months — you’d starve to death and be bankrupt. But after that, and again, just by the sheer volume of cases that we handle, they kind of build up in the chute and every month or two a check falls out the other end,” she said.

Which begs the question: Why would she want the job? Part of it goes back to her funeral director experience.

“I like what we do. I like being the investigator because it’s always a mystery when you have a deceased person who can’t tell you the story. So mostly we’re mystery detectives and problem solvers and I like doing that,” Dorand-Rudolf said.

“I can say that 100 percent of the income that I make is reported on my income tax return. It’s not an extreme amount, it’s definitely not the poverty level. I’m not making $100,000 or anywhere near that on an annual basis and there’s so much of our time you can never be paid for it. There’s a lot of cases we roll on at three in the morning where there are absolutely no assets at all.”

Dorand-Rudolf applauded Jones, the public administrator from 2006 to 2010, for putting procedures in place and getting them an office behind the planning department at 250 N. Highway 160 along with a couple of places to store items.

“The procedures that Bob helped put in place has been carried over to Falkon’s administration and right now our system is not broke, it works. We get a bump in the road every now and then. We get things that don’t go exactly as planned but the whole thing is, we try very, very hard to get it done,” she said.

One of those bumps was a complaint by a California woman last November who complained the public administrator’s office acted too quickly to secure her mother’s property, ignoring a list of next-of-kin on the refrigerator, moving jewelry and other belongings around the apartment. Dorand-Rudolf said they are called to an unattended death by sheriff’s dispatchers — it could be a traffic fatality, a death in a hospice facility or someone that has been dead in their home for weeks — they take care, custody and control of the deceased person’s assets. They look for evidence to find a person’s relatives, a directory on a cell phone, birthday or Christmas cards. A photo inventory is made inside and outside the home.

Many residents used to have a Vial of Life on the refrigerator that could be used to track down who the dead person belongs to, otherwise Dorand-Rudolf said the sheriff’s office helps track down relatives.

The county commission asked the Nevada attorney general’s office to investigate the public administrator’s office after Amargosa Valley resident Linda Bromell complained in July 2012 there was property missing from her dead sister’s house, but provided no proof the public administrator’s office took it. She also alleged prescription drugs were removed and the property wasn’t padlocked. The AG’s office declined to prosecute.

County commissioners in January 2013 passed a bill requiring more information on quarterly reports, like a list of estates, decedents, gross value of the estates and money collected.

“In the past it wasn’t done as well as we’re doing it now,” Dorand-Rudolf said.

One estate she just settled with a $3,650 payday for the office for someone who had a condo on the golf course, a vehicle and a few bucks in the bank in trust for his brother. Some estates are charged $150, where public administrators showed up at the residence, did a first call, secured the property then shortly after the family came and said they can go. Sometimes property like guns are removed until relatives arrive.

“Whatever property they had we did the photo inventory, we had the people sit down in front of us and said here is what we took,” Dorand-Rudolf said. “Where there are no dollars that changed hands, it’s a no-pay. That means family showed up, they said hit the road, they didn’t pay, they didn’t want to pay.”

Bob Pilkington, owner of My Paralegal and a candidate for public administrator, accused the office of fleecing the estates of dead people.

“Anybody can say anything about anyone. I don’t feel that there is a need to speak about anyone’s accusations. If there was a reason that anyone should be looking into what we do and how we do it, it would have been done,” Dorand-Rudolf said. “I don’t get involved with his business and he doesn’t get involved in mine and maybe that’s how people campaign, throw stuff out there and see if it sticks.”