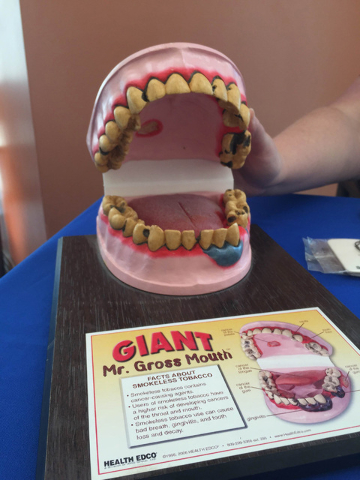 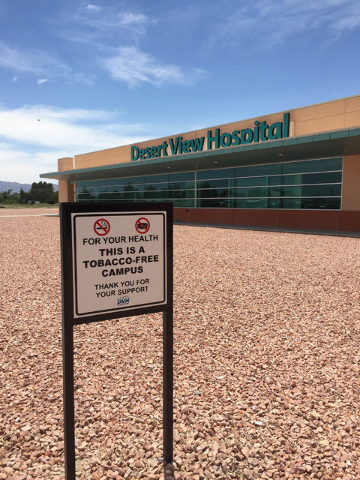 Desert View Hospital and its area facilities officially changed over to a smoke-free campus Monday, as part of a nationwide trend.

Smoking or tobacco use of any kind will not be allowed on property owned by the hospital. This includes the outpatient Physical Therapy clinic at 1500 E. Highway 372, Suite F; both of the Mountain Valley Physicians Group locations, located at 330 S. Lola Lane, #200 and 3370 S. Highway 160, Suite #9; and the medical office buildings located near the DVH emergency department. DaVita Dialysis has also joined the effort in being a tobacco-free campus. The fields and sidewalks surrounding the hospital are also included.

This initiative will eliminate designated areas outside of Desert View Hospital where employees, patients and visitors are currently permitted to use tobacco products. In addition, tobacco use will not be permitted in parking lots, including inside vehicles.

“Desert View Hospital is joining hospitals across Nevada and the nation in an effort to become tobacco free. As a healthcare organization, we are committed to the health and safety of our employees and patients,” said Kelly Adams, Chief Executive Officer at Desert View Hospital. “We believe that we have a responsibility to take a leadership role on this major health issue and allowing people to use tobacco products on any of our properties defeats this purpose.”

Tobacco use is the chief single avoidable cause of disease and premature death in our society, responsible for more than 480,000 deaths each year. More than 16 million Americans suffer from a disease caused by smoking.

In conjunction with the kickoff, Desert View also held a mini health fair, with a few vendors offering education on tobacco use and its effects. Included in the group was the American Lung Association, NyE Communities Coalition and the American Cancer Society.

“We have a few different vendors here, I invited them to be here and give out information today because they all have something to do with smoking cessation or quitting tobacco use,” said Meagan Kowalski, Director Of Marketing for Desert View Hospital. “They have valuable information to give.”

Desert View made sure to incorporate education with the tobacco-free event, as that is a key way to prevent those who have yet to use tobacco, and help those who already do quit.

“We recognize that tobacco use isn’t something that someone just decides one day that they are done with it and have no side effects,” Kowalski said. “As a hospital we wanted to make sure that we had education available for people so that as we are making this change on our campus, they don’t feel like they are left in the dark, they don’t feel alone. They know that we have resources available to help them should they choose to quit.

“We’re certainly not trying to force anyone to quit. We are just doing what’s best for our patients and visitors and to create a healthy environment.”

NyE Coalition held an eight-week, tobacco cessation class at the hospital that several hospital employees in addition to members of the general public took part in. They plan on hosting another series in the near future, and more information on the future classes will be released as they become available.

A group of local cub scouts made individual drawings about quitting smoking, which were on display in the hospital’s lobby.

Not just primary effects are being targeted, secondary effects as well, because even those who don’t use tobacco can suffer the consequence those around them using presents.

“Tobacco impacts more than just the person smoking,” said Markeeta Araujo, chief nursing officer for the hospital. “There’s secondhand effects from everybody around them, so that is part of making the hospital a smoke-free campus, is not only trying to help someone protect themselves, but protecting other people from them as well.”

The initiative, which includes all forms of tobacco including cigarettes, chewing tobacco, e-cigarettes, hookah, and more, is aimed at the hospital’s efforts to promote a healthier community.

“This tobacco-free initiative is a concrete way we can demonstrate our ongoing commitment to healthy living,” said Adams.