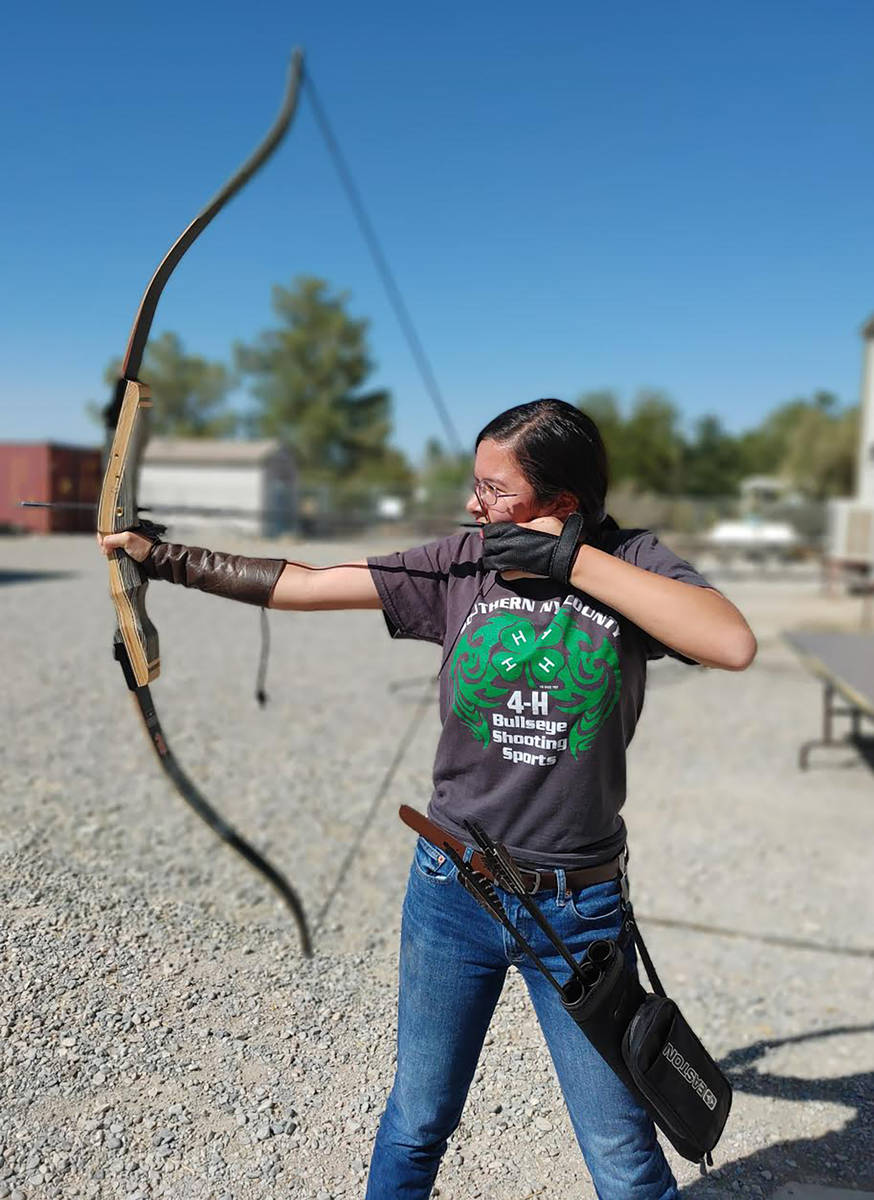 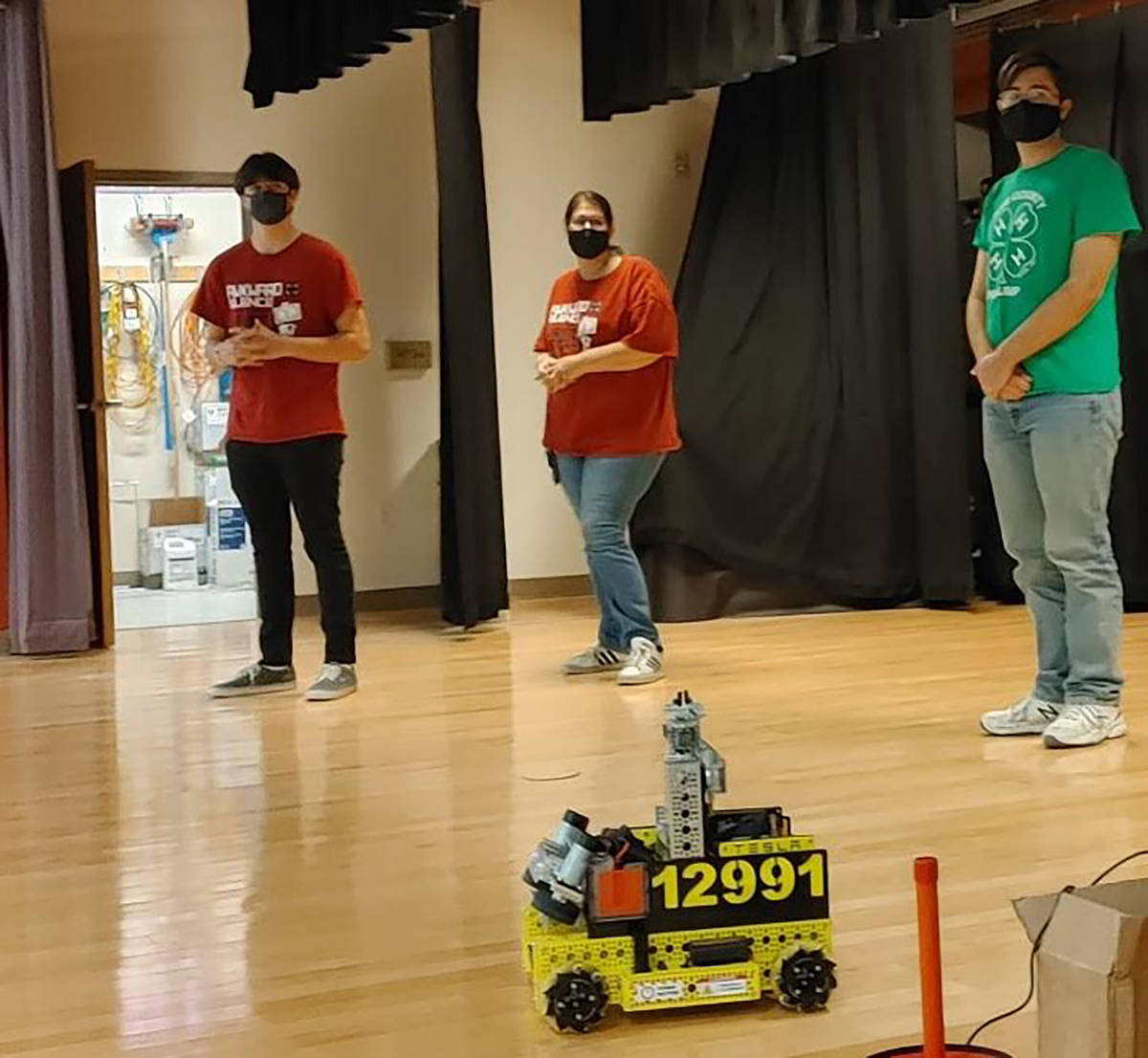 Stormy Ingersoll/Special to the Pahrump Valley Times The 4-H Robotics team Awkward Silence won at state and qualified to go to the world championship, which was unfortunately canceled this year. 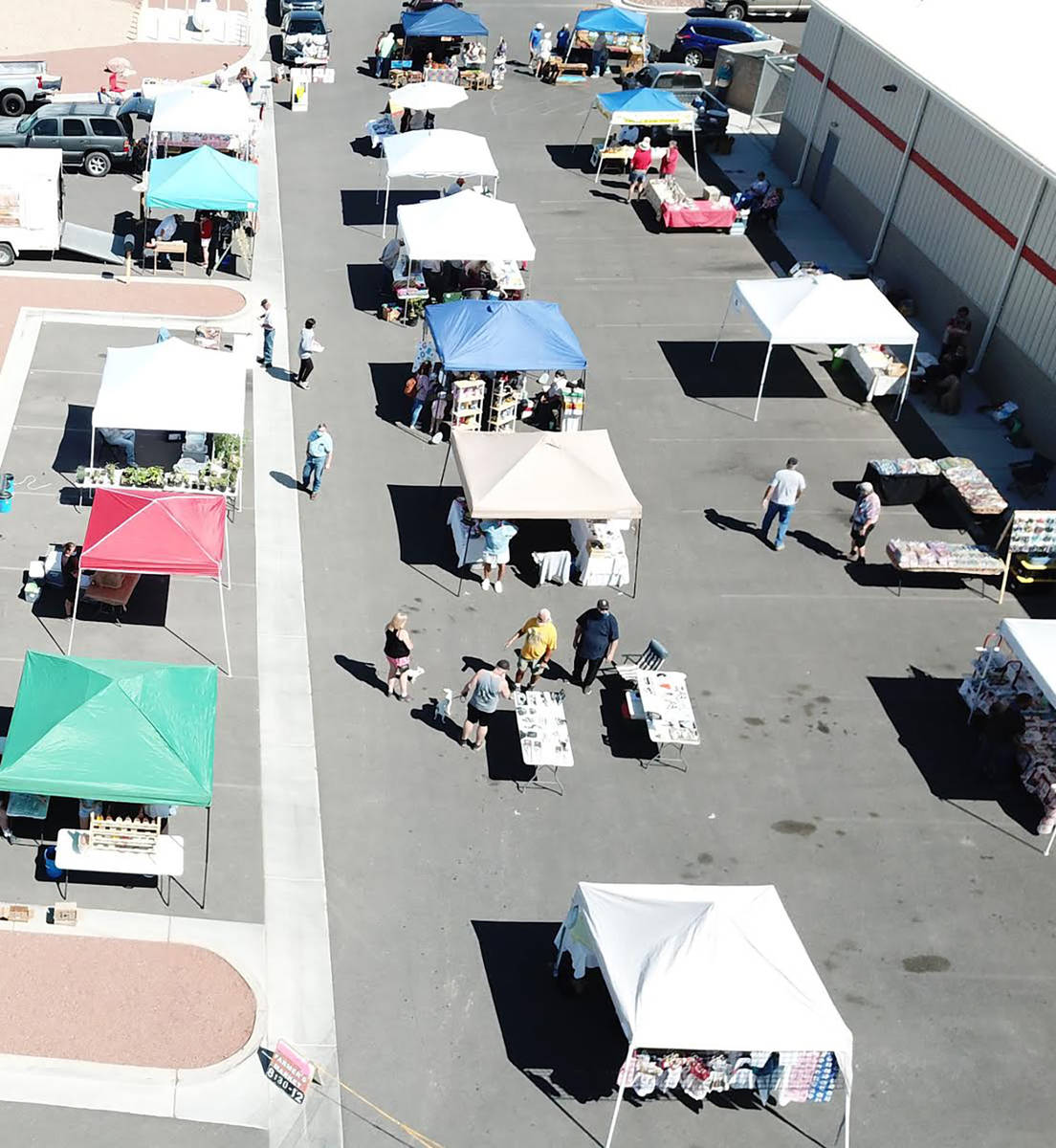 Steve Richardson/Special to the Pahrump Valley Times This picture, taken with a drone, shows the scene at the Farmers' Market hosted at Tractor Supply each Saturday by the Master Gardeners.

Heather Freeman/Special to the Pahrump Valley Times The Demonstration Garden at the University of Cooperative Extension is open for self-guided tours and provides great examples of drought-tolerant plants. 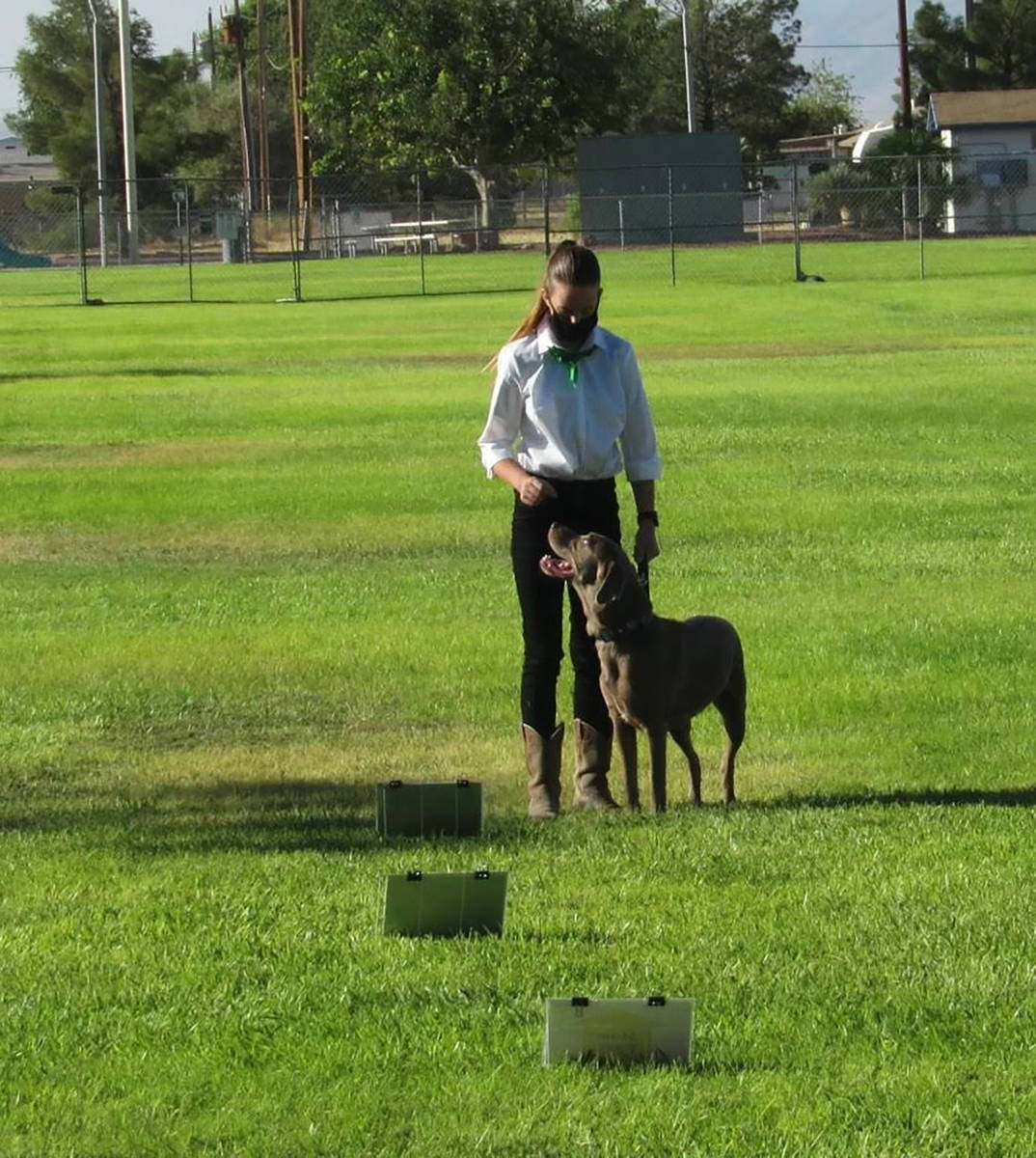 Stormy Ingersoll/Special to the Pahrump Valley Times A member of the 4-H Dog Den club is shown working with her canine.

Heather Freeman/Special to the Pahrump Valley Times This photos shows a portion of the 4-H Youth Garden Club's garden.

“Both the Tonopah and Pahrump offices are back open, in person. Tonopah is open four days a week, we (Pahrump) are open five days a week. We’re getting lots of phone calls and visits,” Freeman told commissioners.

Freeman said one of the larger undertakings by the cooperative extension focused on outreach efforts at local schools. This past March, the organization visited several of the area’s educational institutions in an effort to inspire young students to get involved in some of the extension’s valuable programs.

“Our leaders have gotten involved in the after school program, that is, the SAFE Schools through NyE Communities Coalition. They were able to visit each one of the elementary schools and the middle school this year,” Freeman stated. “They gave out kits that kids could take home, they went back and received evaluations, they worked with each kid multiple times and made sure they visited each school multiple times, to develop that relationship and hopefully, that added a lot more 4-H kids coming to our program this summer.”

As for how the Pahrump 4-H program has done over the last year, Freeman was enthusiastic in her praise, remarking that the members of the various 4-H clubs have managed to not just get through the pandemic, but to thrive in the months of challenge.

“Our 4-H down here in Pahrump has really rocked it this year,” Freeman said with obvious delight. “The robotics team (Awkward Silence) took state and qualified for world, which they would have gone to except it was canceled.”

As of today, Freeman said the robotics team has lost several of its members, who graduated high school and aged out of the program but that has in no way curbed the team’s enthusiasm, with Freeman adding that the group is continuing to meet this summer in an effort to rebuild. “They are training in a new team for this coming year,” she explained.

Touching on a related club, Freeman also spoke about the Lego League Explorers, which can give youngsters a good head start in preparation for joining the robotics club in the future. Freeman remarked that there were, “Lots of great six- to 10-year-olds that are coming up into engineering and are wanting to get involved in STEM.”

The 4-H Bullseye Shooting Sports club has also earned itself a pretty prestigious honor this year, with two members of the team currently in Nebraska representing the state of Nevada at the National Championships.

Another 4-H program is the Word Play Cafe Creative Writing group, which is in the middle of a very exciting process, the publication of their own book, titled “Photographic Memories”. Freeman said that book, which is still in the works, is being published as a means of raising funds for the group and the public will be able to help in this mission by purchasing a copy when it goes to print this fall.

The Dog Den program is yet another 4-H group that gives children the ability to train their canine in agility and showmanship while also learning how to work with one another as a team, and the Get Started in Art club gives youth the chance to explore their own creativity and imagination. 4-H also has a Livestock Project and a Garden Club, aimed at teaching kids how to properly handle animals and how to grow their own delicious, healthy fruits and vegetables.

One of the other efforts of UNCE that Freeman seemed excited about was the distribution of 100 kits for the Health Rocks! Program. “It’s promoting having kids make healthy choices. It’s kind of combining healthy food choices, healthy lifestyle habits, resisting drugs, and a third layer is healthy mental health choices. So being able to recognize when they are under a lot of stress, some ways to relieve that stress, what’s a good choice, what’s a bad choice and when they need to ask for help for themselves or a friend, so being able to reach out and ask for help,” Freeman detailed. Those kits were handed out to students at Rosemary Clarke Middle School.

Moving on the activities outside of 4-H, Freeman said the Master Gardeners are doing well, too.

For the Master Gardeners, one of its best known programs is the weekly Farmers Market, which takes place at Tractor Supply every Saturday. The COVID-19 pandemic did take a toll on the Farmers Market last year, having prompted a shutdown in compliance with the state’s initial response to the onset of the pandemic. The weekly events resume in June and then shut down again in early December but as of January, Freeman said the Farmers Market had come back stronger than ever. “We average 22 to 25 vendors per week and about 300-plus walk-throughs. On a great day, we can get more than that,” she explained.

The Master Gardeners also continue to consult on local community garden efforts, such as those at the PEC RV Resort, Faith For Action and Floyd Elementary, as well as engaging in other activities such as clean-up projects to help remove trash lining Highway 372, the local Earth and Arbor Day event, the Wild West Extravaganza and of course, keeping the cooperative extension’s demonstration garden looking its best.

“The extension garden itself is open for self-guided tours from dawn to dusk. We have a lot of people that take their dog for a walk, or trade rocks. We have three geocache on site and at least one Pokemon Go so there are a lot of people who use the property just for relaxation and entertainment,” Freeman said. She added that the demonstration garden is also a good place for people to go when looking to find inspiration and education regarding the best kind of flora to plant in the valley, noting, “Most of the trees and plants (at the demonstration garden) survive with very little water and help demonstrate the beauty that the desert can provide.”

As the presentation came to a close, commission chair Debra Strickland thanked Freeman for taking the time to join the meeting that morning. “Your outreach is phenomenal. Good job to Stormy (Ingersoll) also!”