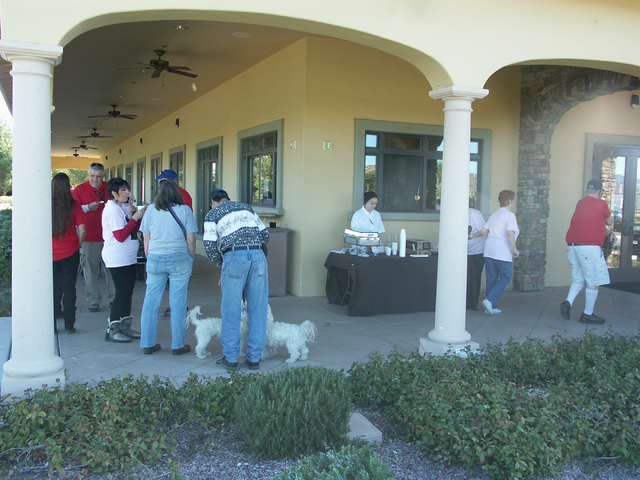 Approximately $2,000 was raised for a local animal foundation during an annual multi-restaurant event Saturday night.

Now in its third year, the Symphony in Motion Dinner Drive allowed participants to hit the road and dine at eight different area restaurants to sample what each has to offer.

The event is a fundraiser for the planned Symphony Animal Foundation, a no-kill animal shelter in Pahrump.

Organizer Cindy Colucci said she was pleased to help coordinate the experience again this year.

“It went really well, but we would have liked to have more participants,” she said. “It was an opportunity for a great fundraiser for a good cause. We had about 70 to 80 people join us on Saturday.”

Sanders Family Winery was the official starting line for dozens of local residents who embarked on a gastronomical odyssey. The entire course covered more than 60 miles.

Following registration at the winery where participants were treated to wine and cheese, the carnivorous crowd caravanned to Mountain Falls Grill Room where the first course consisted of a special tomato and basil soup with crackers.

“They had us out on the patio overlooking the golf course on a very gorgeous day,” she said. “It was great fun and the tomato and basil soup was great.”

The event offered diners an assortment of culinary delights as the group headed to Tacos El Chero on Homestead Road.

“They had many seasoned chicken tacos and they were very, very good,” Colucci said. “From there we went to Saddle West for their fabulous salad bar and as usual it was wonderful. They had heated garlic cheese bread sticks and they were a real treat.”

Nico’s Pizzeria on Loop Road was the fourth stop on the dinner drive.

“They have fabulous pizza with homemade crust,” she said. “The crowd got there a little bit early and instead of leaving, most of them enjoyed a glass of wine or a beer and watched some sports on the television.”

Nevada Treasure RV Resort was next on the map where Chef Mark, as he is known, was waiting for the group to arrive.

“He served us great big huge baked potatoes with sour cream and butter,” she said. “It was just delightful and we had a lot of fun. We then went out to Kathy’s Short Branch Saloon in Crystal where they had Italian meatballs. Of course the bar was open and people were having all kinds of fun out there.”

Draft Picks on Highway 160 was the final stop of the eating excursion where diners were treated to a special cheesecake dessert, as they capped off the day.

“It was just a wonderful day,” Colucci said. “We had lots of fun and lots of food and lots of different tastes. It was a good way for restaurants to share with the community what they have and where they are. A few of them from last year didn’t really pan out this year. We also had very excited participants as far as the food went and we are really, really happy.”