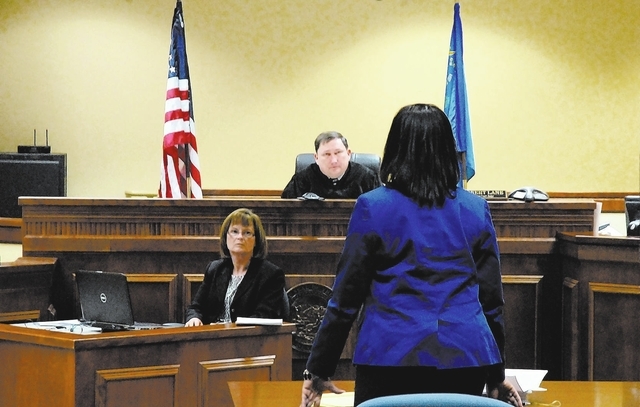 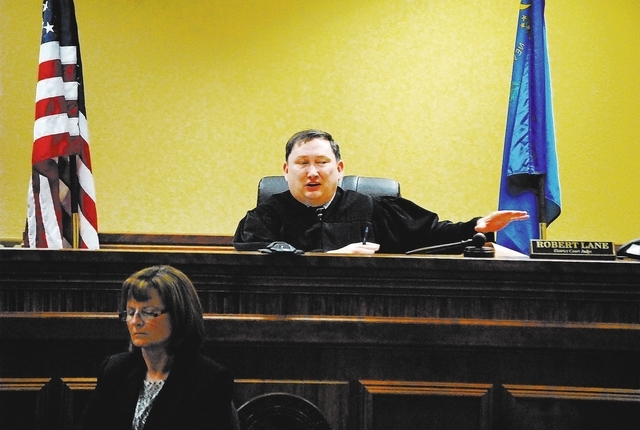 After 20 years of service to Nye County, one local judge says he still enjoys helping members of his community through his line of work.

Fifth Judicial District Court Judge Robert Lane celebrated his 20th anniversary with the county on Sept. 3. He began working on that day in 1993 after he was hired to serve as a deputy district attorney in Tonopah.

Although he now serves Nye, Esmeralda and Mineral counties as a District Court judge, Lane said he is happy living with his wife and children in Pahrump and could see himself as a member of the community for a long time to come.

Lane was initially drawn to the area of law as a possible profession from a young age.

The judge said while many of the other boys at his high school in Henderson were talking to girls or doing other things during their lunch hour, he was in the library, reading the local newspaper and catching up on the world events.

“When I was growing up I always had an interest in political science, what’s going on in the community with politicians and laws and different things. Even to this day I still veraciously absorb Fox News and all the channels to see what’s going on nationally and so on and so forth. Since I’ve become judge I don’t talk too much about it, except for the occasional little barbs in court, but I’ve always had an interest even when I was a young man in high school,” he said.

“Since I’ve always had that natural interest, I took political science classes and as you know when you get your political science degree you go now what? And of course the natural step from that was to go to law school and try to get into areas that I could affect the community. I’m not a big fan of politicians, so it’s ironic, but I just wanted to help the community.”

Although he had a passion for political science and what was going on in the world around him, Lane’s law career didn’t start until several years after he graduated from high school.

Lane decided to serve his country by joining the Navy when he finished high school.

The judge said it was one of the best decisions he ever made and his time in the service taught him a lot about the world and himself.

“I came from a poor family. I don’t know if anyone else in my family even graduated high school, but I wanted to make something of myself and get an education. So back in those days, nearly 30 years ago, they didn’t have counselors who would talk with you about college and so forth and no one in my family had gone, so I met with a Navy recruiter who said ‘oh you want an education? Join the Navy.’ So I did, and I enjoyed my Navy service,” Lane said. “And one of the things I really like about it was I wish we could send guys who come in front of me in court to the military like they did in the old days because it teaches you responsibility and duty and discipline, the things a lot of people who come in front of me today need to learn. And of course we have our boot camp program today, but it taught me discipline and responsibility. When I joined the Navy at that time it was right after the Vietnam War — the military was very unpopular — but back then I was young and naive and very patriotic and I wanted to do something for the country so I joined the military and it’s given me great life background. There’s a lot of things I see here in court or out in the community that I’m able to handle better or a little bit smoother than some people would because of my experiences I had with the military. I guess another way to say it is a well-rounded personality. I’ve seen poor places and rich places and good people and bad people and when you have that kind of well-rounded experience when you step into the role of judge you’re able to handle the different facets much better.”

After he finished his time with the Navy, Lane came back to Southern Nevada before embarking on a mission trip for his church to Canada for two years.

Once he had finished serving his church, Lane said he tried to help several friends launch an online shopping website in California, like Amazon, before deciding to go to college.

“When I went into the Navy I traveled the world and then I went on a mission to Canada for a couple of years and then I came home and I moved to California with some friends I had met while I was in the Navy and tried to start Amazon, a computer internet business, but we failed, otherwise I’d be talking to you on my yacht right now,” Lane said as he laughed. “After the business failed and I was living in the back of an old carpet store and driving a pickup truck and no girls would marry me, I decided I better make something of myself. So I came home and lived with mom and went to UNLV and got my bachelor’s degree. Then I went into law school at the University of Utah in Salt Lake City. When I finished that, I came back to Las Vegas and began applying to all the DA’s offices in Nevada and for about six to nine months no one would hire me. Then I saw a job in the RJ in Tonopah, so I applied for it, got it and that was 20 years ago Sept. 3, 1993.”

After he was hired by the Nye County District Attorney’s office to serve as a deputy district attorney in Tonopah, Lane said he went on to prosecute many cases before ultimately deciding to run for judge.

“What made me want to do it is that ambition attorneys have combined with I had a family and I wanted to succeed and achieve and grow more for them,” Lane said. “I thought as a judge I could do a good job and be fair and reasonable and respectful of people and make good decisions and so I wanted to put that into practice.”

Though he said he presented many cases as a prosecutor and has presided over many as a judge, Lane said he was proud of the fact he has never had a major reversal of any of his judicial decisions by the Nevada Supreme Court.

During his career as a District Court judge serving the county, Lane helped start the Drug Court program, which is now overseen by Judge Kimberly Wanker, and has continued seeking judicial education to continue improving his understanding of the law.

Lane said one of the best parts about his job has been the colleagues and staff he has had the chance to work with.

“I’ve enjoyed working with the other judges, Judge Davis and now Judge Wanker. You learn from everyone you work with. I worked with Judge Davis I learned things and I’ve worked with Judge Wanker and learned things and I have had great staff. When you work with a staff every day your life is really more about the staff than it is the cases and so forth and the people I’ve worked with have been great and I treasure that,” he said.

Lane said while his ambitions have also been to achieve the next level or challenge he saw on his career path, he feels like he has finally reached a good place to stay.

“My whole life whenever I’ve achieved something, whether that was getting qualified on the submarine or getting my bachelor’s degree, whatever it is, as soon as you achieve that goal you look off to the horizon and say what’s next? This job is the first one in my life where I’ve achieved a goal and looked off into the horizon and saw like the Nevada Supreme Court or something and said you know I like this, I think I’m just going to stay,” he said.

“I love the rurals, I think the people in Vegas rarely go north of the county line, but thanks to the job I got in Tonopah, I’ve been all over the state now and seen a lot of beautiful wilderness places east of Tonopah, Gabbs and Smoky Valley and all over. I wouldn’t move back to Vegas now. It’s overcrowded and the traffic is terrible. I’m very happy being out in the rurals for the rest of my life,” he added.

Lane continues to preside over Department Two of the Fifth Judicial Court. He says each day he makes the best decisions he can with the information he is given in each case and will continue to enjoy his ability to help people in his judicial capacity.