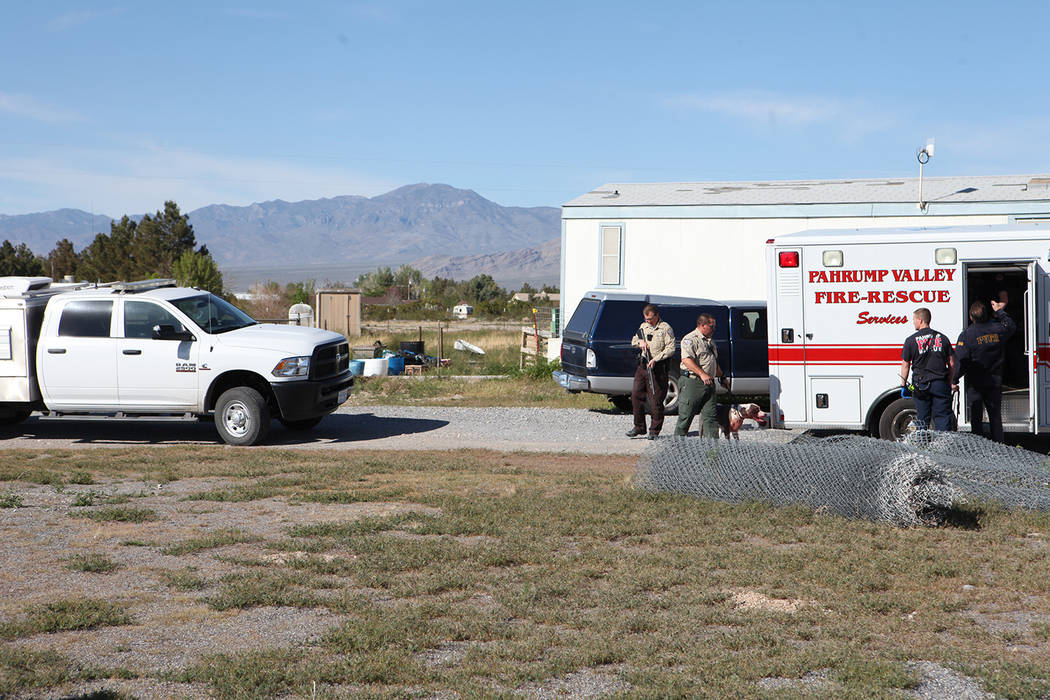 Selwyn Harris / Pahrump Valley Times Nye County Animal Control Officer Levi Gregory holds “Ziggy” the pit bull who came to the defense of Steve Benson, founder of Happy Acres Animal Sanctuary. Neighbors said Ziggy helped to thwart the attack came to the defense of Benson who was attacked Tuesday afternoon by another pit bull at the facility. Though Ziggy sustained injuries by fending off the attacking pit bull he is expected to make a full recovery.

A Pahrump man is recovering from a vicious dog attack early Tuesday afternoon.

He is listed in fair condition by an official at UMC Trauma.

A sheriff’s office sergeant, driving home after his shift, was first on the scene.

“Upon the arrival of a plainclothes sergeant, he observed one of the dogs actively attacking a male with another dog attacking the aggressive dog,” the release stated. “The sergeant took immediate action by putting down the attacking dog.”

“We were dispatched for a report of an animal attack and were placed into level-one staging,” Lewis said. “The sergeant shot one of the dogs, killing it, and ceased the attack. We then moved up where we found the injuries were consistent with a flight to UMC Trauma in Las Vegas. We brought Mercy Air 21 to the scene where patient care was transferred, and that patient was flown out. He sustained upper extremity injuries.”

Peggy Saunders, the president of Pets Are Worth Saving (PAWS), has known Benson for roughly a year.

She provided additional details on the attack.

“It was a pit bull, which was the newest dog Steve took in,” Saunders said. “It somehow broke off his muzzle and attacked Steve. His arm was mauled and broken, and he also had damage to his arteries. Aside from his arm, I understand he is in pretty good shape.”

“Ziggy tried to take the other dog out,” she said. “The dog that attacked Steve was (killed) at the scene. The one that came to his defense is also a pit bull. We had him treated and he is expected to have a full and complete recovery. The neighbors said Ziggy actually saved Steve’s life. I’ve had a number of calls from people around the community who are worried about Steve.”

Nye County Animal Control officers arrived on the scene to retrieve the deceased animal while transporting the friendly dog to a veterinarian for medical treatment.