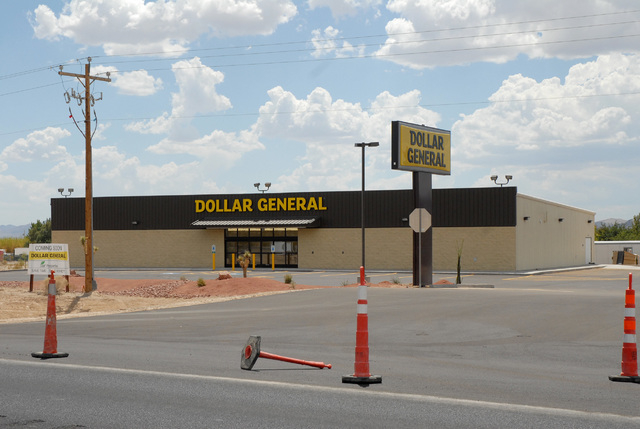 Those looking for employment with the new Dollar General store coming to Pahrump would be better off, according to media representative for the retailer, Dan MacDonald, applying on the website dollargeneral.com/careers, and doing it quickly. The store is set to open a month early.

General contractor Steve Higgins said the project, originally set to have a soft opening at the end of August and a grand opening the first week of September said the work is just about completed. “We’re running ahead of schedule,” he said. “Corporate representatives will be here next Tuesday to do a walk-through. They will give us a punch list of things needing to be brought up to specifications, we make those corrections and they’re ready to go.”

“I really don’t expect there to be very many things needing to be fixed,” Higgins said. “I’m good at what I do.”

Dave Richards, the project engineer at CivilWise Services, agreed that everything is going smoothly according to the plans.

Higgins said it doesn’t take long after the fixtures and building have been approved, for Dollar General to get the store fully stocked, hire its employees and open the doors. “I’ve worked with other companies like Dollar General. It takes about three days from the time the trucks pull into the lot before the doors open.

Higgins said, “I have people ask me on a daily basis ‘Where can I get an application?’ I tell them, ‘There is no place locally, just online.’”

“They usually move some key people into the store from another location to train new employees, but all the hiring is done from online applications,” MacDonald said. “There will be about six to 10 jobs available.

“The soft opening is set for July 27 and the grand opening for August 9.” MacDonald reiterated that Dollar General is not what it appears. “Only 25 percent of our merchandise sells for under $1.”

“Our main goal is to offer consumers better prices on products they use every day. We can save them up to 40 percent on things they might purchase at a pharmacy and up to 20 percent on everyday items they would find in a grocery store.”

Dollar General is not a pharmacy for filling prescriptions, nor is it a fully-stocked grocer.

He said there will be no fresh produce and no fresh meat but the store will stock a wide variety of prepackaged frozen and refrigerated items.

During the grand opening MacDonald said the first 50 customers will get a $10 gift certificate and a “goody bag.”

MacDonald said the Dollar General Charitable Foundation is concerned about child literacy and becomes a part of the community fabric by donating to and supporting literacy programs in local libraries and other venues.