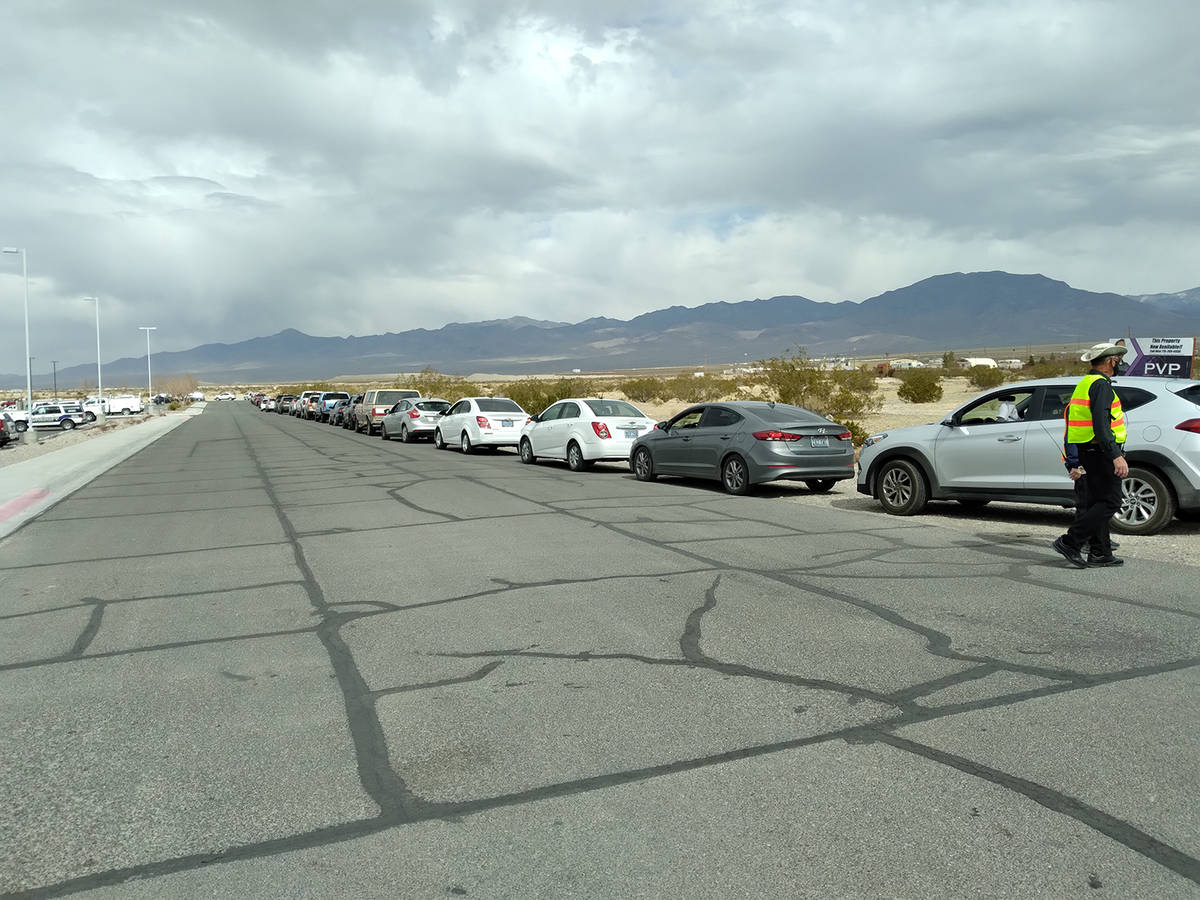 Selwyn Harris/Pahrump Valley Times Dozens of drivers and passengers lined up along Floyd Street at Basin Avenue in anticipation of receiving their COVID-19 vaccine on Wednesday morning, March 3rd. The traffic jam is believed to have contributed to a two-vehicle crash involving a small passenger car and a tractor-trailer at the location where one person was transported to the hospital.

Nye County Department of Emergency Management Director Scott Lewis said late last month that as a result, the agency is doing its best to catch up on administering vaccinations to both local and Nye County residents at large.

The term Lewis used to describe the vaccination events are known as “pods.”

“Nye County did not receive their allocations last week, and we still have not received much of the allocations this week,” he said. “So the pod that we’re completing today is a piece of the catch-up, but not the completed catch-up, and we are waiting for more vaccines to be received, which will allow us to continue with the normal vaccination schedules.”

During the Feb. 24th vaccination operation at the Department of Emergency Management, Lewis said he and volunteers hoped to vaccinate at least several hundred people, between 8 a.m. and 6 p.m.

When vaccinations got underway in Nevada late last year, it was the frontline health care workers, along with staff and residents in long-term care facilities, who were among the first to receive phase one of the two-phase multi-tiered process.

“This is a pretty good pod and we’re hoping to complete 400 vaccinations today,” he said. “We have set up multiple lanes and we have multiple vaccinators. Pahrump Valley Fire and Rescue Services is completing the post-vaccination monitoring and EMS assessment, to make sure everybody who leaves the facility is fine with no issues.”

Lewis also made sure to stress the importance of making an appointment in order to receive a vaccination.

“There’s always some complaints and the majority of complaints are from people who don’t schedule an appointment, and they try to jump in line, so that is one of our biggest challenges, but quite frankly, it’s just human behavior,” he said. “I would say that the majority of our people that come through are courteous, appreciative and the process goes quite cleanly and smoothly. The timeliness is there too, with the multi-lanes approach.”

One person waiting in line for a vaccine was local resident Mary Waseleski, who said she had no concerns or reservations about getting vaccinated.

She also thanked Lewis and the team of volunteers for keeping the process simple and uncomplicated.

“They are very organized and they’re making it very easy with no confusion,” she said. “I think it will make all of this better in the future.”

On the issue of COVID-19 safety protocols, Waseleski, who waited roughly 15 minutes to get her shot, said she practices social distancing and wears a mask when out.

She also shared her thoughts on the so-called “anti-maskers.”

“I have no problem with it,” she said. “It’s their choice, but COVID-19 has made my family much more cautious about travel in any situation.”

By the car load

Lewis meanwhile, said multiple people in the same vehicle can receive the vaccine, as long as appointments for all are made.

“The driver and passenger can get the vaccine, as long as they made the appointments, and are on the list, and they meet the respective tiers and lanes,” he said. “Anyone can fill up a car if they have to come in one car because it saves space out in the roadway staging area, but they have to be in those eligible categories, and that’s why making an appointment is so important. It’s ongoing and there’s multiple tiers within this tier. They are also administered a card which is extremely important because it lists the product, the lot number, and when they should return for their second dose. All of that information is captured on that card, and eventually, it will be their proof that they’ll be able to submit to someone either traveling or their workplace to show that they have received both vaccinations.”

As of Monday, March 1st, a total 6,979 doses have been administered, with 4,868 vaccinations initiated, which equates to the number of the first doses given.

When a second dose to complete the vaccination process is administered, it will be designated as vaccinations that were completed, which at present is 2,111.

Regarding the logistics of providing the vaccinations, Lewis lauded the efforts of both staff and volunteers.

“We have assembled a great team of career people from the Department of Emergency Management, Pahrump Valley Fire and Rescue, and a whole host of volunteers that have come up here to commit their entire day to vaccinating and doing the support paperwork, and you can’t thank those people enough,” he said.

For additional information on COVID-19 testing and vaccinations, call 775-751-4333, or log on to www.nyecounty.net