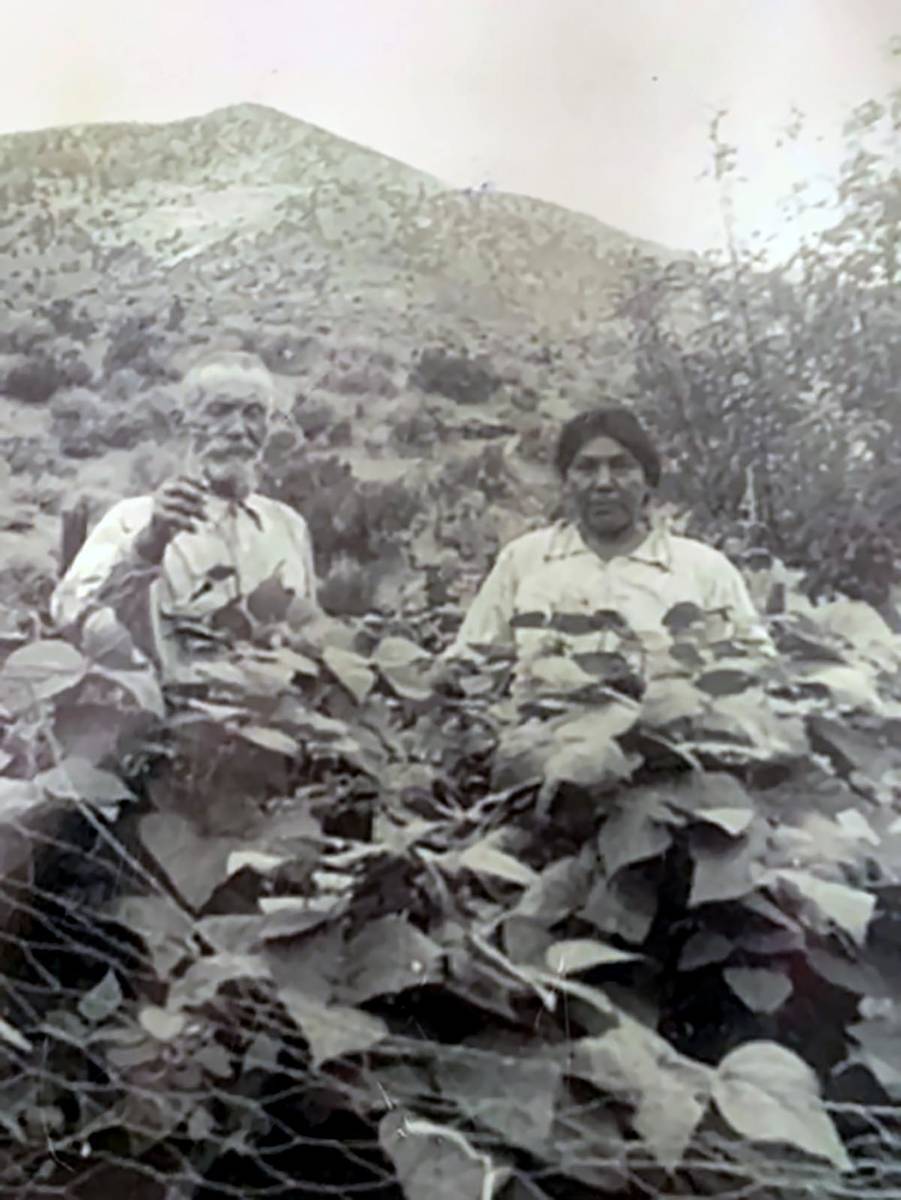 Special to the Pahrump Valley Times Cesar and Mary Rose Strozzi in the pea patch at Strozzi Ranch. 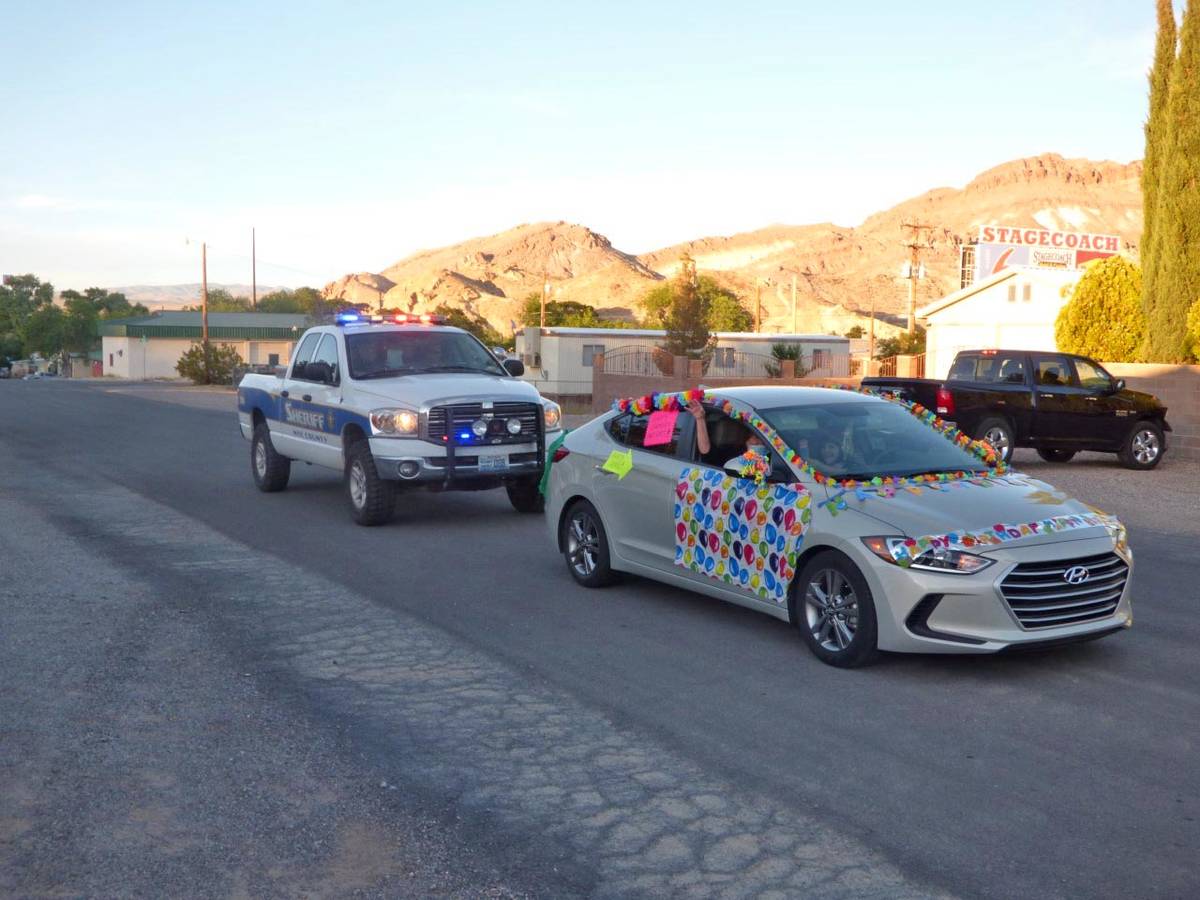 Special to the Pahrump Valley Times Family members and friends in cars, on bikes, and on foot paraded by the home of Beatty's oldest living resident, Enes Strozzi Wells, for her 99th birthday celebration. 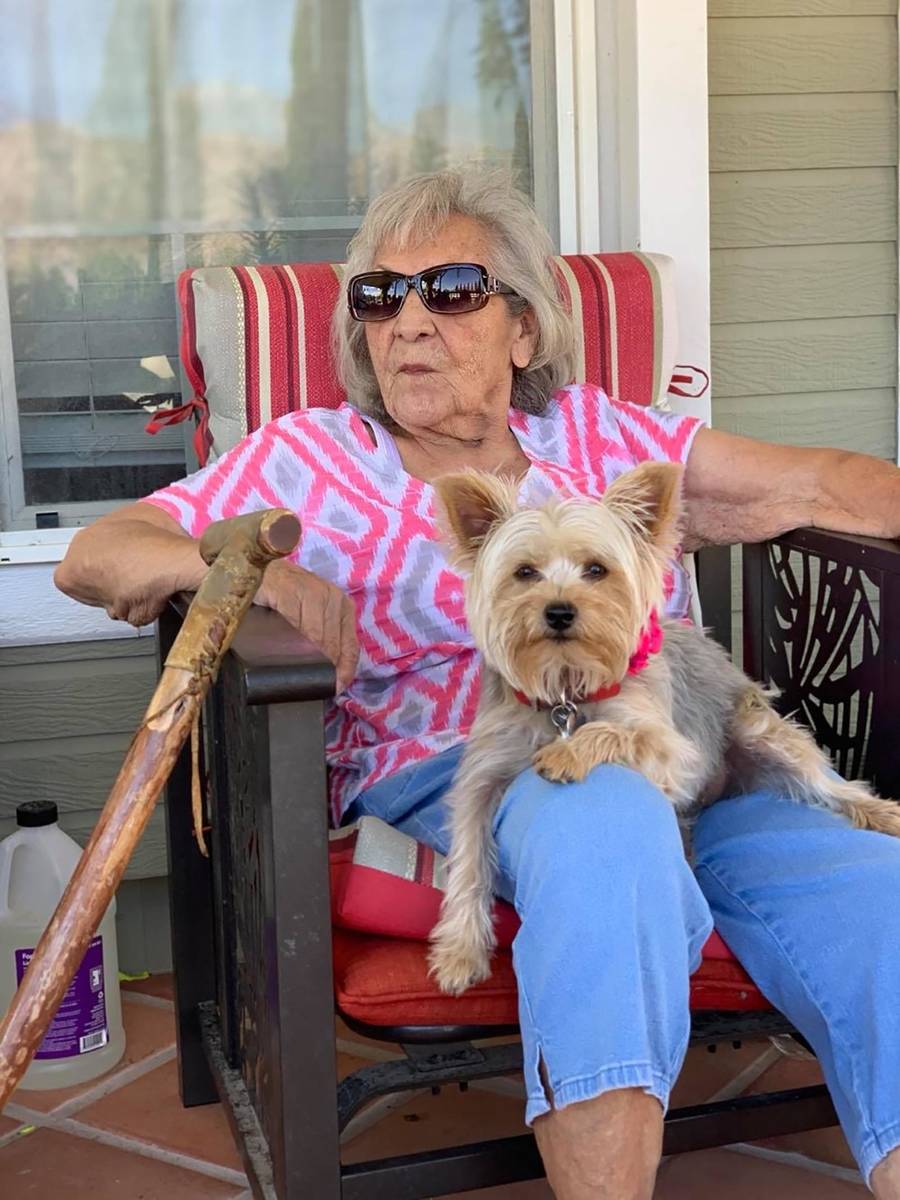 Special to the Pahrump Valley Times Enes Strozzi Wells, Beatty's oldest living resident, was surprised with a drive-by celebration for her 99th birthday in mid-May. 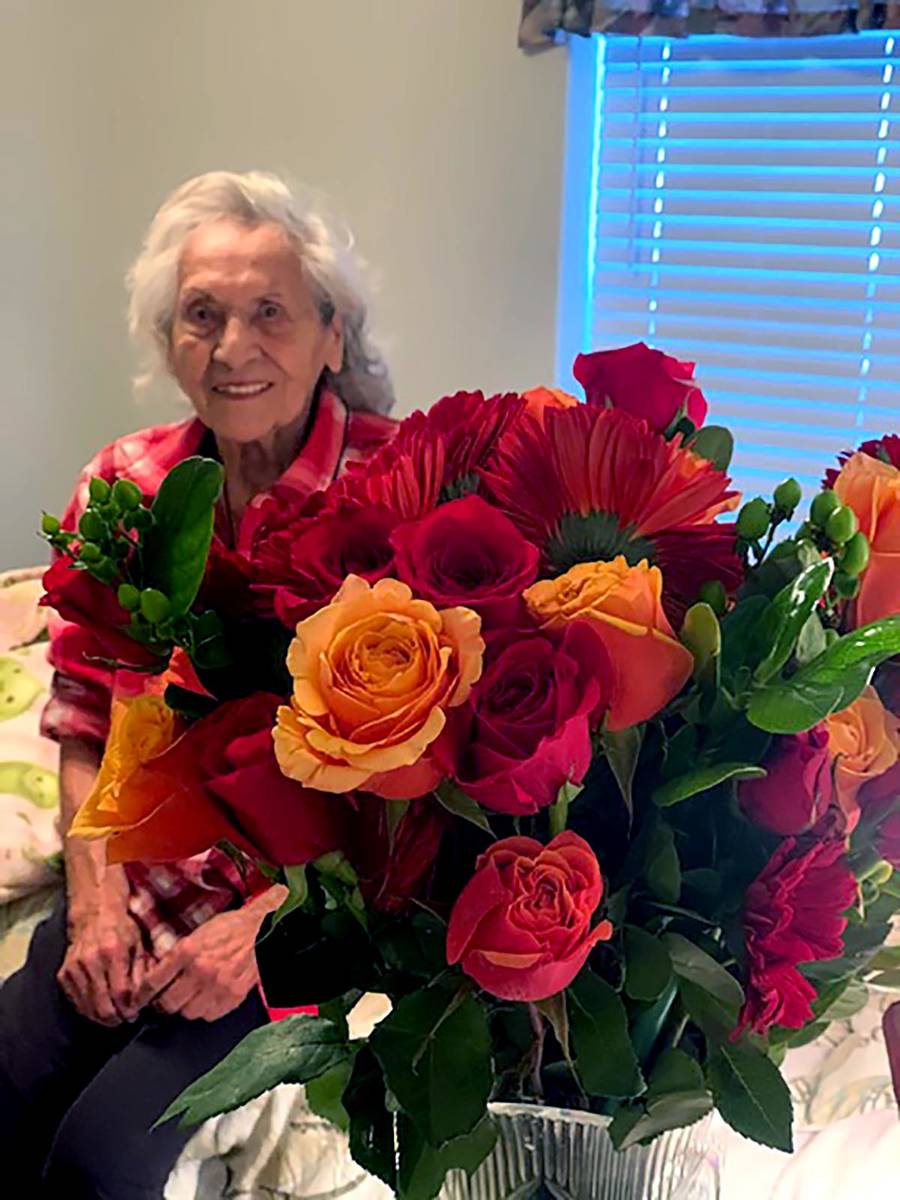 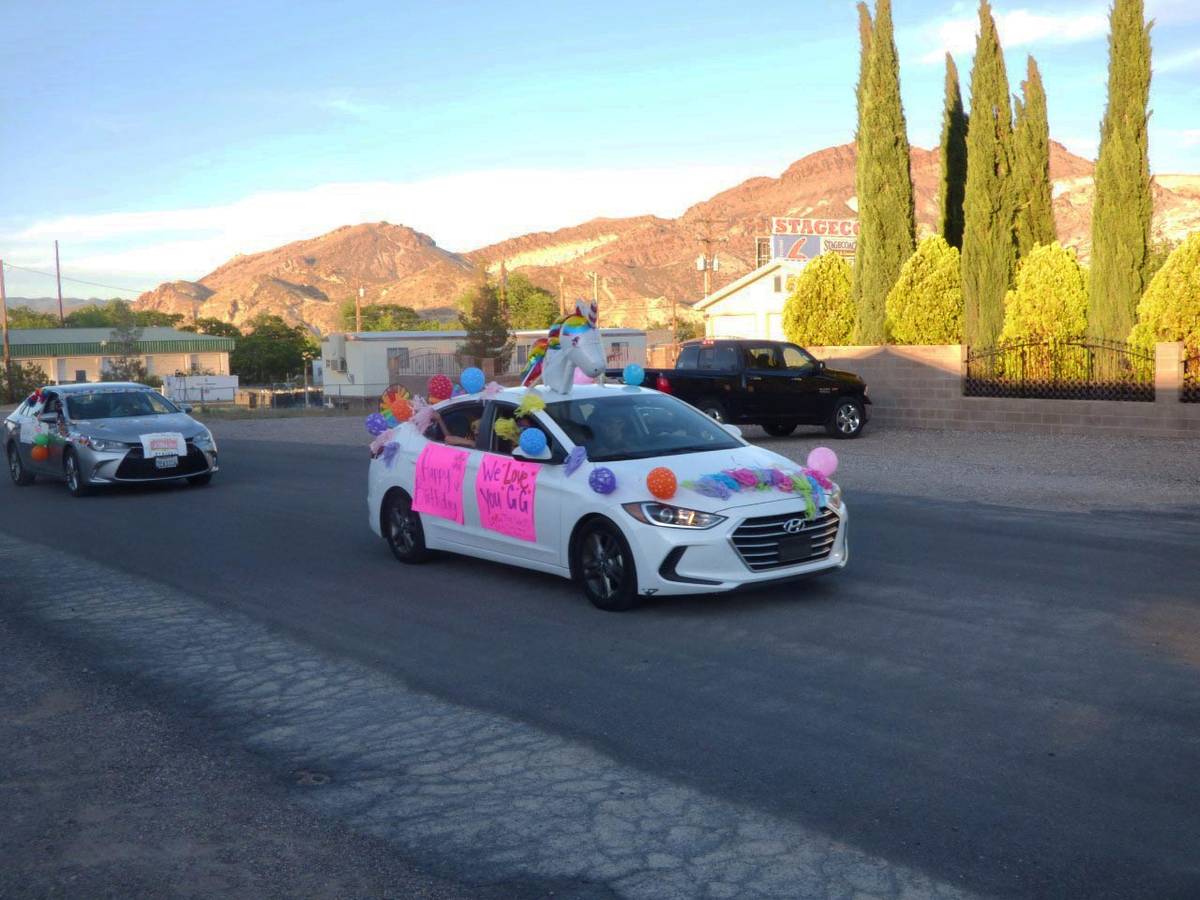 Special to the Pahrump Valley Times Two Nye County Sheriff's deputies led a parade of vehicles past the home of Enes Strrozzi Wells in Beatty in mid-May. The parade of people coming by were participating in a drive-by celebration of Strozzi's 99th birthday. 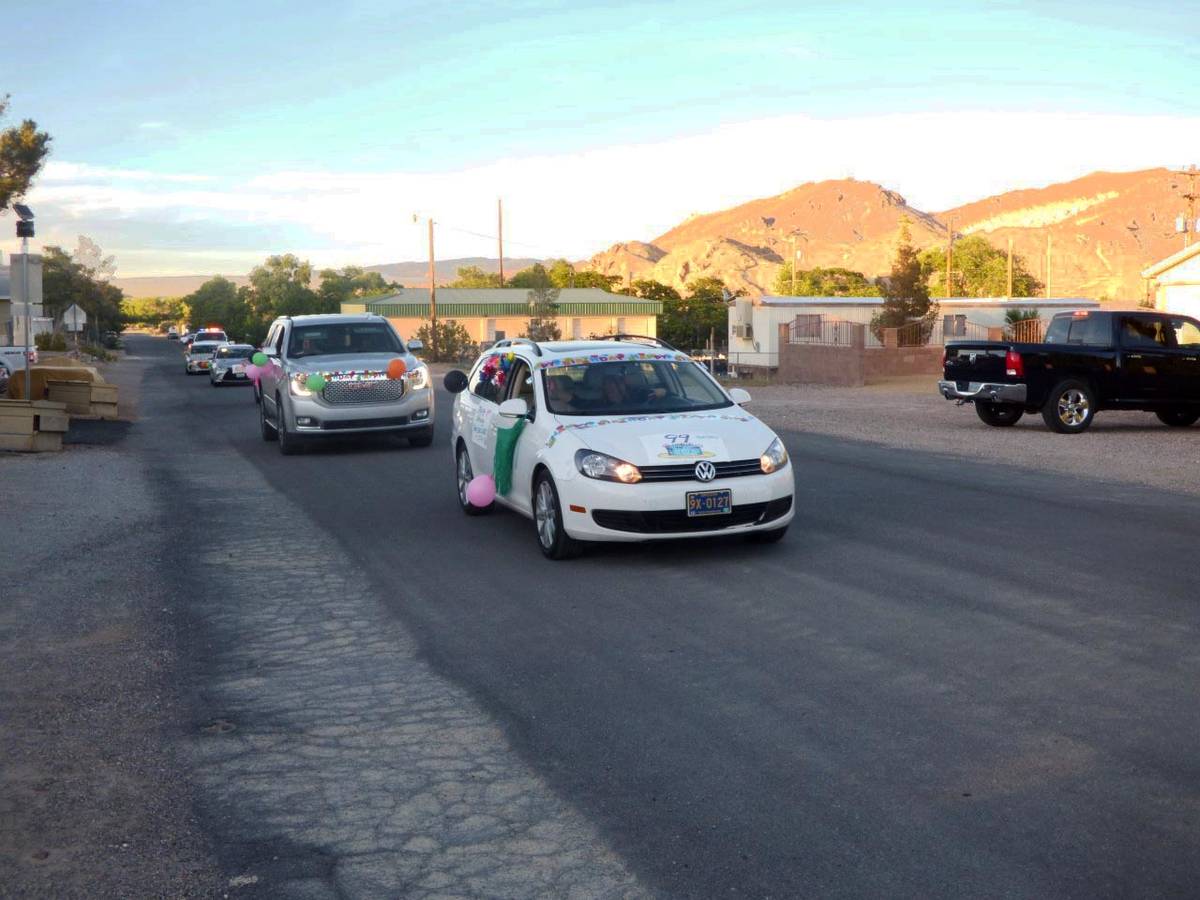 Special to the Pahrump Valley Times Two Nye County Sheriff's deputies led a parade of vehicles past the home of Enes Strrozzi Wells in Beatty in mid-May. The parade of people coming by were participating in a drive-by celebration of Strozzi's 99th birthday.

Enes Strozzi Wells, Beatty’s oldest living resident, was surprised with a drive-by celebration for her 99th birthday, Friday, May 15.

Family members and friends in cars, on bikes, and on foot paraded by as Enes watched from the porch of her daughter, Julie Watkins’, home, where she is currently living. Two Nye County Sheriff’s deputies led the parade, with Deputy Mark Murphy in a patrol car and Deputy Breanna Nelson on a motorcycle. Deputy Nelson is Enes’ great-granddaughter. Another deputy, Chris Martinez,was at the end of the parade in a patrol pickup.

The patrol vehicles saluted Enes with lights and sirens, and as the other vehicles, many heavily decorated, passed, drivers honked their horns, and people yelled birthday greetings.

Enes Strozzi Wells was born in Beatty on May 15, 1921. Her parents were Cesar Strozzi, an immigrant from Biasca, Switzerland, and his wife, Mary Rose, a Shoshone Indian from the Grapevine Mountains in Nevada.

Enes’ parents lived in Beatty, but also had a ranch at a higher elevation northwest of Beatty where the family would spend summers. Strozzi Ranch, which Cesar established around 1931 and abandoned in 1947, is now part of Death Valley National Park in an area sometimes called “The Nevada Triangle.”

Enes started school in Beatty in a building located behind the Exchange Club. She spent all her elementary school years in Beatty, then attended the Sherman Indian School in Riverside, California. She returned to Beatty High School for her senior year, and graduated with the class of 1941.

She married Thomas Lester Wells in 1947, and they lived in the house that is now used as an office by the Beatty Water and Sanitation District. After a year, they moved to California, but Enes returned to Beatty after her husband’s death in 1991 to be with her sister, Delores “Dolly” Gillette.

Enes and Thomas had two children, Craig and Julie, and Thomas had a son, Gary, from a previous marriage. Enes legally adopted Gary in 2009 when he was 66 years old. Daughter Julie reported that “the entire courtroom broke out in laughter when their case was called.”

Enes has one living brother, Harry, remaining, and one living cousin, Theodore “Bombo” Cottonwood, of Beatty.