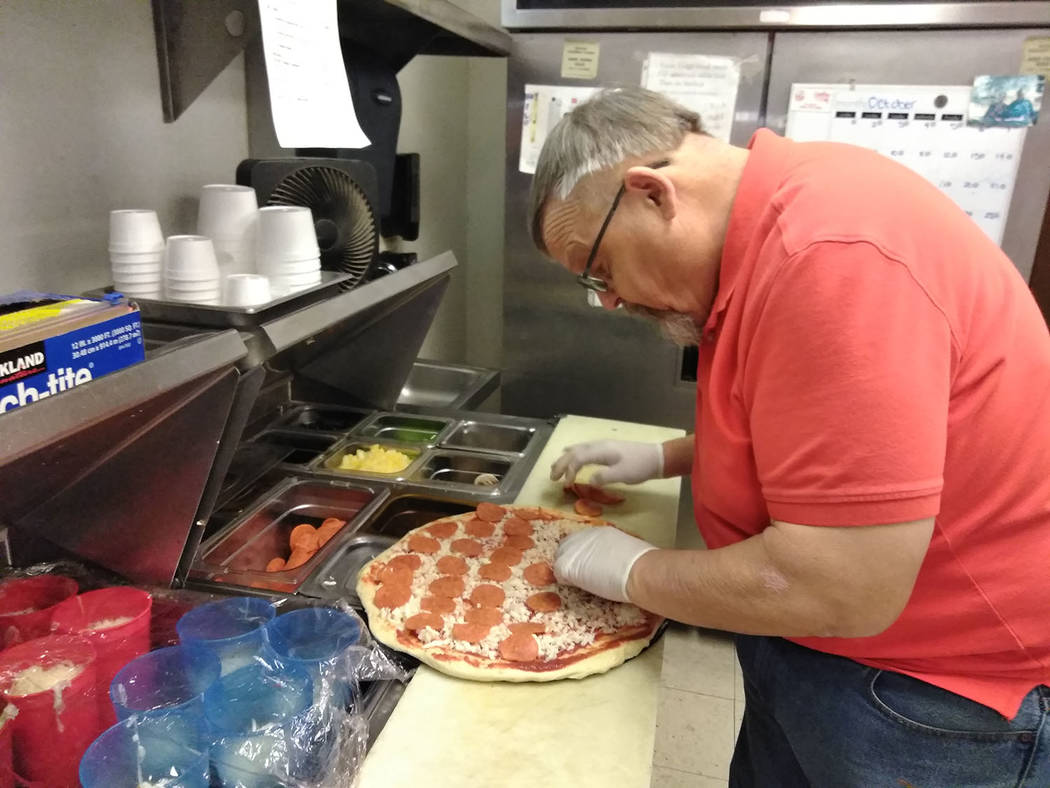 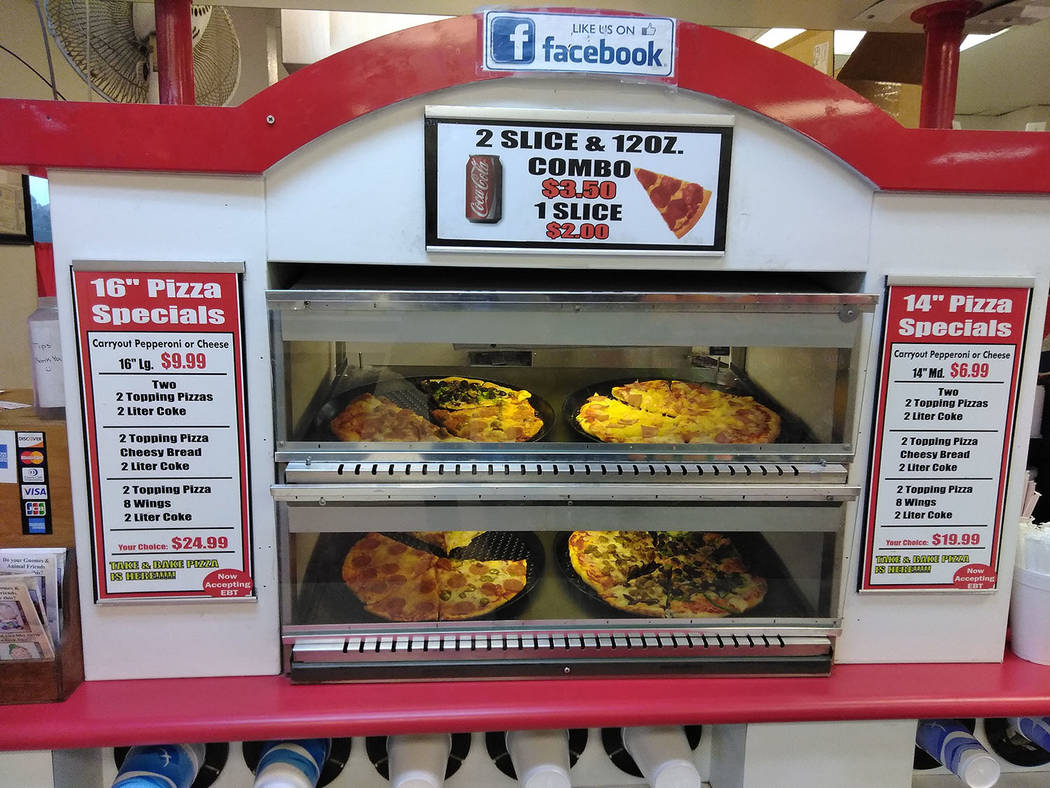 Selwyn Harris/Pahrump Valley Times Tarantino’s Pizza owner Bob Shourek took over the business back in 2009. Since then Shourek said he routinely participates in local fundraising events throughout the year. 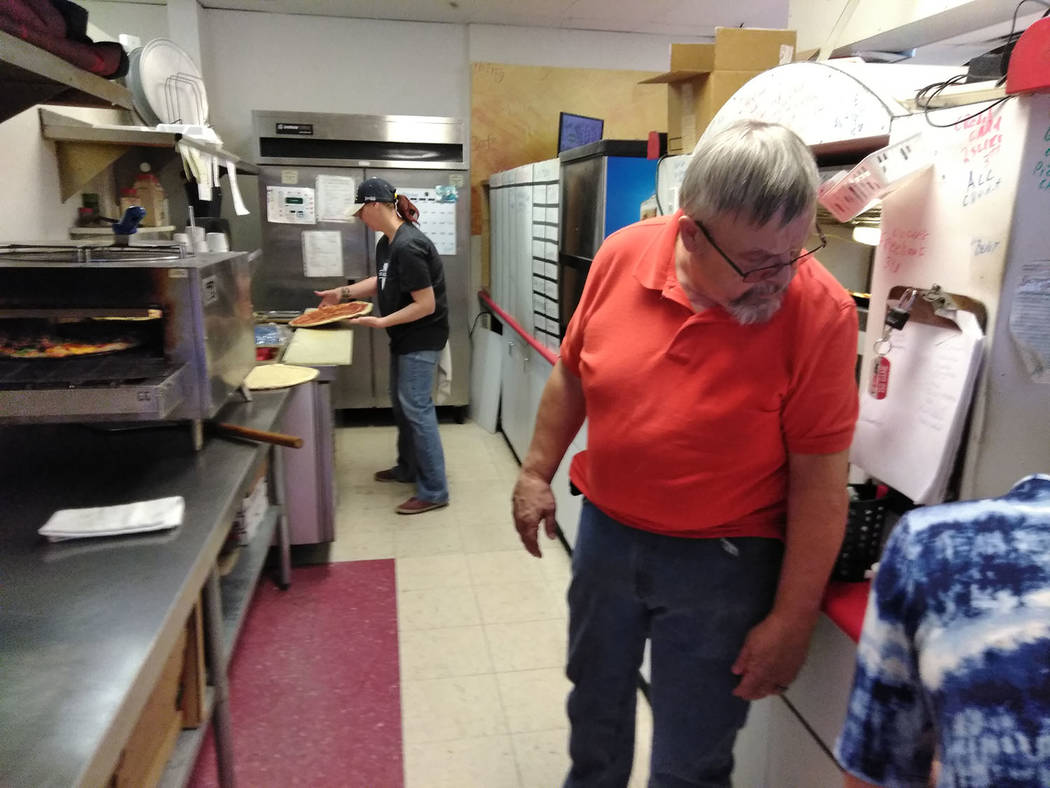 Perhaps you may not know, but some Americans are celebrating National Pizza Day today.

Among the varied observances taking place across the country, there’s a local one with a strong focus on the community’s homeless population.

One local business, Tarantino’s Pizza, along with a national hunger relief organization called Slice out Hunger, and a national restaurant online-pizza ordering company known as Slice are making it all happen.

Slice Out Hunger, by the way, has generated more than a quarter of a million dollars to fund hunger relief efforts around the U.S.

Stepping up to the plate

Bob Shourek has owned Tarantino’s Pizza at Nevada Highway 372 and Linda Street inside the Horizon Market since 2009.

Shourek said officials with Slice inquired whether his business would like to participate in the Pahrump effort.

He accepted the request.

“They asked all of us proprietors who are involved in Slice to donate 10 pizzas to a local food bank and we will be doing so today to Pahrump’s Covenant Lighthouse Church,” he said. “I will be making ten 14-inch pepperoni pizzas because we’re not sure what people want. We are just going to make it easy and simple. We are happy to do it and I think it’s a great thing to help the homeless because we need to help everybody.”

Today’s effort, Shourek said, is not the first time his business has participated in an altruistic community event.

“We want to get involved with a lot of organizations here,” he said. “We just do what we can do, and I would absolutely encourage other businesses to participate in this kind of a program. Anything you can do to help others in our community is a good thing. We always want to step up to the plate and help in any way we possibly can. I always believe what comes around, goes around.”

As an example of that adage, Shourek said his business, which is always closed on Sundays, opens its doors just twice a year on Sunday, as a symbol of appreciation to a local organization.

“Over the years, we have worked with the local Tribe Motorcycle Club here in town,” he said. “They do the Christmas Toy Run delivery on two Sundays each year for the kids. And after they do their run, we open up to feed those guys and gals. We have been doing that with the Tribe for about four or five years.”

What comes around, goes around

Additionally, Shourek spoke about a time when his family was facing a dire financial challenge when his wife Judy needed an expensive medical procedure completed.

Tears welled up in his eyes as he recalled the story.

“I thought that since we have done fundraisers for organizations here in town, I would see what I could do for Judy,” he said. “The medical procedure cost around $2,500, and I ended up raising over $2,000. The Pahrump High School cheerleaders had something called a GoFundMe page, which I didn’t even know what it was. The Tribe Motorcycle Club did a bike run and the Nugget bowling alley really stepped up. It’s hard for me to talk about it without getting emotional, because as I said, what comes around, goes around.”

Shourek also recalled a day when he encountered a homeless person while out shopping one day.

“I don’t know her name but she and her husband hit hard times and are now homeless,” he said. “I ran into her at Walmart and I just stood there and prayed with her for a minute. The bottom line is, that most of us are all one paycheck away from homelessness.”

As far as how his business is faring, Shourek said things are going pretty well for he and his employees.

“We have a very good clientele and everybody is happy with the product that we put out,” he said while preparing a pepperoni pizza. “I have been here since 2009, and the phone continues to ring, so you can say that business is good. It will be nine years come October.”