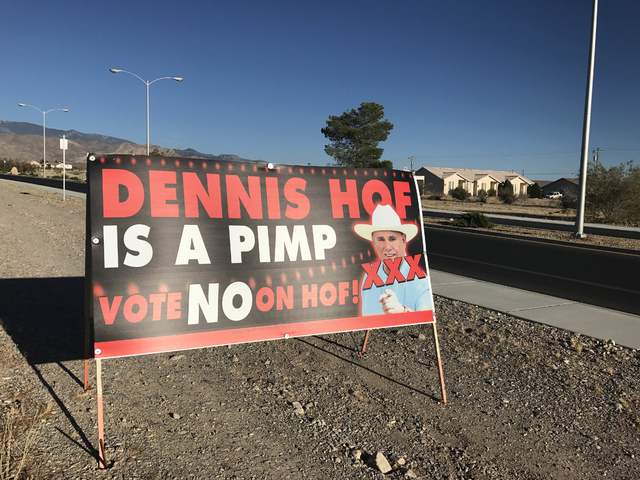 Local sign makers are profiting off the election as their output increases. Signs vary from small signs found in residents’ front yards, to large billboards located off the side of busy highways. Mick Akers/Pahrump Valley Times

Campaign signs pop up all over town as local companies are prospering off candidates’ battles for votes.

Signs vary from small signs found in residents’ front yards, to large billboards located on the side of busy highways. Local sign makers are profiting off the election, as their output increases.

Since the primary election, Quality Signs owner B.J. Mills said that business has spiked around 25 percent.

“Oh, we’ve printed out a lot, probably hundreds of signs,” Mills said. “Possibly up to a thousand.”

“The price range varies from five dollars, for a high quantity of the 18-by-24-inch yards signs up to about $1,500 for the billboards,” he said.

Although still busy with the general election candidates, the primary election was busier for Quality Signs.

“We had more quantity as far as candidates, as there were more running,” he said.

With the general election just a few weeks away, Mills said they have a few candidates that the shop is printing out signs for on a regular basis, with one race keeping them busier than the others.

“We’ve worked with about half a dozen (candidates) here over the last week or so,” he said. “The campaigns have been mostly Hof and Oscarson, as they keep going back and forth with each other.

Mills said that the store doesn’t show any bias toward any party affiliation and welcomes all comers who need signs printed for their campaigns.

“All things political, we work with whatever comes in,” he said.

Although he tries to stay away from negative campaign signage, Mills does print them as long as it is not offensive.

“As a rule, I generally try not to print anything that I don’t want my kids reading on the side of the road,” he said.

“A lot of the time those tend to be more general. Joe Schmoe comes up and says ‘I want to make a sign with an expletive on it,’ I’m like, ‘nope’,” he said. “If I’m driving with my kids in the back seat I don’t want to read it and I don’t want them to read it.”

Although larger signs can take up to three days to print and install, smaller ones have a quick turnaround process.

“Especially with the political signs, everyone wants to get things on the ground sooner than later and we work to accommodate that,” Mills said. “It depends on what people are going for, but I can do next day for the smaller ones. Usually, we like to have two or three days, but when that’s not possible, we can do the same day for the most part.

“Obviously, nobody is going to get a billboard up the same day, but if you need a yard sign or something like that I can get that going the same day.”