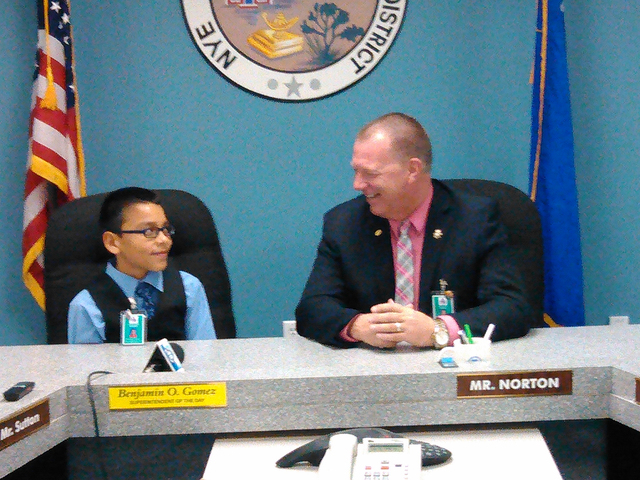 While friends and classmates were busy with last-minute school work before the three-day President’s Day weekend, Gomez assumed the duties of Nye County School District superintendent for a day.

At 8 a.m., the Manse Elementary fifth grader began his day in typical fashion at the school, but his schedule soon digressed about an hour later as he and Superintendent Dale Norton departed the campus for the school district office where Gomez assumed many of the duties Norton performs each day.

Gomez was selected for the position for his voracious appetite for reading, having read more than 4 million words from August through January.

After meeting with district staff, Gomez held a press conference where he laid out his itinerary for the day to local media and spoke about his accomplishment.

“I like to read because I have no television,” he said. “I like reading the adventures and seeing what the characters do. Sometimes I have a really good book that I just want to finish reading and I like to predict what they’re going to do.”

Manse Librarian Clarissa Binderim said unlike some students at the school during recess time, Gomez prefers to spend his time indoors rather than the athletic fields.

“He spends his recess time with me in the library either reading or taking tests on his books,” she said. “We have several students who also do that.”

As far as determining roughly how many words are read by Gomez, Binderim noted that special software is used to determine word count.

“The computer program does all that for us,” she said. “We just go in and ask for that particular report and it lets us know what the student’s word count is and how many books they read.”

As a straight A student, Gomez noted that his favorite classes include reading, writing and PE, which he said dodge ball is one sport he excels in.

As far as a career, Gomez suggested it’s still up in the air at this point.

“I either want to be a veterinarian or a teacher,” he said. “I’d like to teach reading.”

Superintendent Norton said he believes there’s a good chance Gomez could end up, if he chose, as a leader within the Nye County School District in the future.

“He and I have one thing in common for sure because he was also principal of the day at Manse Elementary School. We both were principal and now we’ve both been superintendent,” Norton said. “Down the road, I guess I’ll look at retiring someday and through the process, when he graduates from Pahrump Valley High School, he could go on to college and maybe aspire to be a leader for the Nye County School District. I would certainly support that.”

Following the press conference, Gomez and Norton met with transportation officials and members of the Teacher’s Leadership Council before arriving at Mountain Falls Grill Room for lunch with Norton, Binderim and local developer and longtime resident Tim Hafen.

Gomez’s day-long district tour ended at the school he will presumably attend next year.

At 1:15 p.m., he and Norton arrived at Rosemary Clarke Middle School for a tour of the sixth grade building and a question and answer session with school administration.