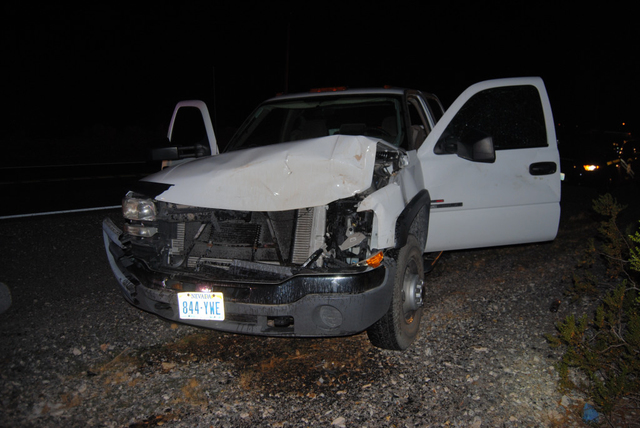 A full-size pickup truck sustained major front-end damage after colliding with a wild horse on Highway 160 near Bell Vista Avenue. Though the driver was uninjured, the pregnant horse died on impact. It’s the second collision in as many weeks involving an animal. On Dec. 21, the driver of an SUV struck and killed two burros in the roadway just after dusk. Special to the Pahrump Valley Times 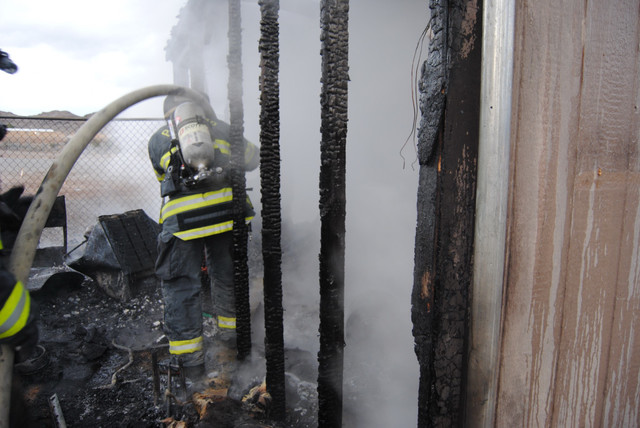 Fire crews extinguish a structure fire on the 2800 block of Bannavitch Street last Friday. The fire broke out in an accessory building on the property, which was home to more than 100 animals. No animals were injured in the late afternoon blaze, but one person was evaluated for smoke inhalation. Special to the Pahrump Valley Times 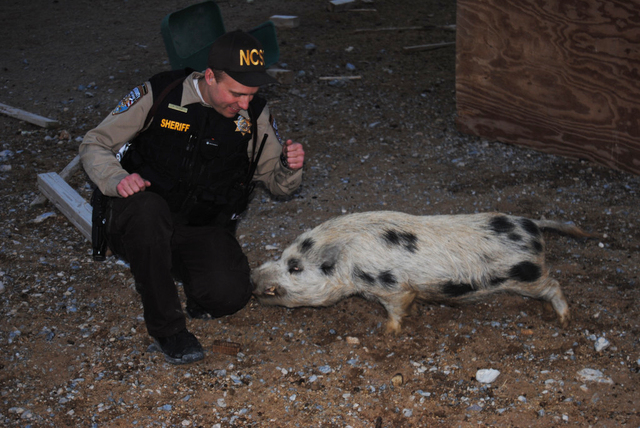 A Nye County Sheriff’s deputy makes friends with one of 100 animals on a property on the 2800 block of Bannavitch Street following a structure fire in an accessory building last Friday. The exact cause of the fire remains under investigation. Special to the Pahrump Valley Times

For the second time in as many weeks, a motorist driving along north Highway 160 struck and killed an equine.

“Upon arrival, we found a vehicle versus a wild horse,” he said. “The pregnant horse was deceased on location and there was significant damage to the vehicle, however, the occupant claimed non-injury.”

Lewis also said that due to the cold weather conditions in the mountains and foothills, wild horses and burros are coming down into the valley to graze.

“This is a good time to remind motorists around the valley that anytime you are driving on Highway 160 from Irene Street northbound, you should use extreme care and watch for burros and wild horses crossing the roadway.”

Last Wednesday evening on north Highway 160 near Country Place Road, a driver of an SUV struck two burros walking in the travel lanes just after sunset.

One died upon impact while the other was dispatched by a Nye County Sheriff’s deputy on scene.

An individual sitting atop a motorhome prompted the response of both Pahrump fire crews and Nye County Sheriff’s deputies last Tuesday, Dec. 20.

Chief Lewis said crews were summoned to the parking lot of Walmart on Highway 160, just after 3 p.m.

Lewis noted that a Stokes Basket, also called a Stokes Stretcher, is a metal wire or plastic device widely used in search and rescue.

On Thursday, Dec. 22, fire crews were dispatched for an electrical fire on a utility pole on South Highway 160 near Rainbow Street just before 10:30 a.m.

“The situation caused a power disruption to the south-central part of the valley for several hours,” Lewis said. “Crews assisted the Valley Electric crew ensuring that the fire was extinguished. The scene was then turned over to Valley Electric Association for repairs.

On Friday, Dec., 23, fire crews were dispatched to the 2800 block of Bannavitch Street, for a structure fire just before 4 p.m.

Lewis also said once crews made their way to the back side of the property, they were able to quickly extinguish the fire.

Though there were no casualties among the animals, at least one civilian attempting to rescue some of the animals was treated on scene for smoke inhalation.

Highway 160 at Irene Street was the scene of a multi-vehicle collision on Sunday just after 5:30 p.m.

One of the vehicles was a Nye County Sheriff’s Office cruiser.

“Upon arrival, we found a three-vehicle accident including a Nye County Sheriff’s Office vehicle,” Lewis said. “There was significant damage to the three vehicles. There was no entrapment. However, one patient was treated and transported to the local hospital as a precautionary measure.”