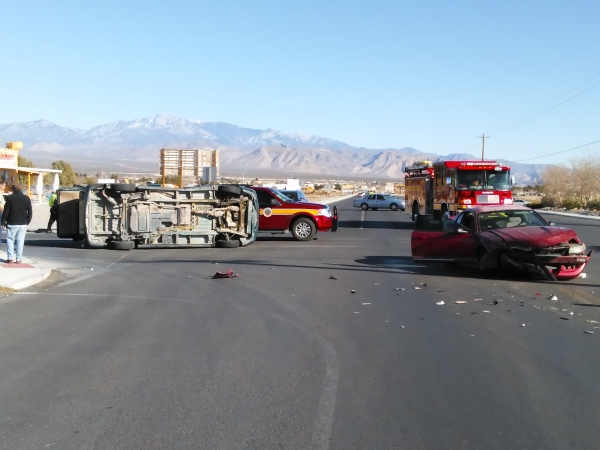 Pahrump Valley Fire and Rescue Services Chief Scott Lewis said the Christmas holiday weekend was easily one of the busiest he and his crews have experienced in recent memory.

Lewis said calls for service were non-stop as they responded to a variety of incidents throughout the weekend, ranging from structure fires and explosions, to motor vehicle collisions.

Medical transport calls were too numerous to mention.

Lewis said it all began just after midnight on Christmas Eve when crews were dispatched to a residence along Bruce Street for a report of a gas leak.

“The leak was controlled at the tank so there were no real issues with that one,” he said. “Then we had a motor vehicle accident at the intersection of Highway 372 and Lola Lane. There were two individuals that were injured who were treated at the scene and transported to the local hospital.”

The onslaught continued on Christmas Day just after 12:30 a.m., where crews were dispatched for a motor vehicle accident on Highway 160 near Harris Farm Road, on the far north end of town.

“We found a vehicle well off the roadway,” he said. “There was one injury but they refused medical assistance. It wasn’t a rollover, because it appeared they rode it out. The vehicle traveled about a hundred yards off the roadway.”

Hours later, Lewis said crews were dispatched to a structure fire in the central part of town.

He noted the weather conditions created an additional challenge while fighting the fire.

“Upon arrival we found a well-involved motorhome at the rear of the property, with numerous exposures nearby,” he said. “The crews commenced a defensive exterior attack based on the type of structure and quickly controlled the fire with no extension. During that time the crews faced very miserable conditions with high winds and some precipitation. The fire grounds were very muddy and it presented very difficult conditions to fight the fire but the crews did a great job. It was an unoccupied RV which was sitting idle for a while. The property owners did have some temporary power running out to the structure.”

Lewis also said crews were summoned to the area of Gamebird Road near BLM-owned land after reports of explosions were received by dispatch.

“Upon arrival there was a light smoke condition but it quickly dissipated,” he said. “The investigation revealed that there were no parties in the immediate area. By midnight we had 14 fire-related emergencies and we handled five on Christmas Day which brings the total to 19. We had seven more on Saturday, and four additional ones on Sunday. This is not including a lot of the medical calls. We had approximately 35 responses in three days from Thursday through Sunday.”

On Monday, fire crews and NHP responded to a three-vehicle collision at the intersection of Highway 372 and Blagg Road.

“Upon my arrival, I found one vehicle resting on its side and another car with significant front-end damage,” Lewis said. “The other vehicles sustained relatively minor damage. The investigation revealed everyone had self-extricated, however there were at least two parties that were injured and were transported from the scene by Medic 3.”

Lewis, meanwhile, offered advice for those who plan on celebrating the start of the new year on Thursday.

“The simplest advice I can offer is don’t drink and drive and watch out for other drivers,” he said. “If the weather conditions are not the best, make sure you take due care and drive slower and try to forecast your turns sooner. Drivers must always watch out for other drivers and if they see anything suspicious along the roadway, they should call 911 for the sheriff’s office. If they see any accidents, they should call 911 to get the fire department and sheriff’s office. We want people to use extreme care and have a happy and safe, successful New Year.”