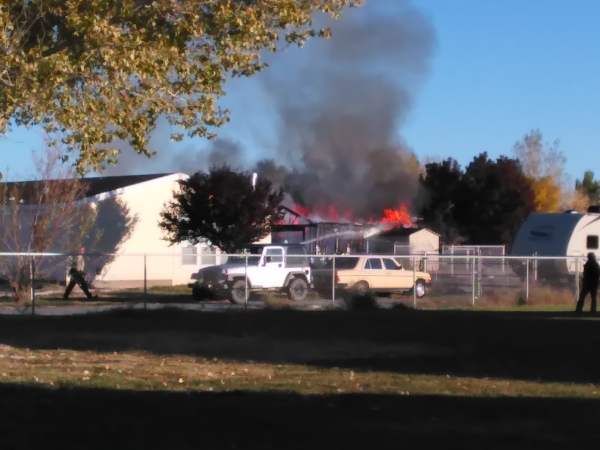 It was a very busy start of the week for crews with Pahrump Valley Fire and Rescue Services as they dealt with situations involving flames, planes and the common everyday hand grenade.

On Saturday crews responded to the 4600 block of Cheyenne Way after neighbors reported an early afternoon structure fire.

Fire Chief Scott Lewis said the structure was a detached two-car garage that went up in flames just after 3 p.m.

“We’re looking at a probable cause from an electrical related issue,” he said. “It had a certain service amperage going to that and some of the things that were being used may have exceeded it. “We don’t believe it is anything less than accidental at this point and there were no injuries. Two dogs that were in a kennel directly next to it were removed safely.”

Lewis said a building on the property went up in flames just after 9 a.m.

On Monday, fire crews encountered a potentially explosive situation at a residence along the 4800 block of Savoy on the valley’s south end of town.

A man clearing weeds from his front yard found what appeared to be a live hand grenade underneath the brush.

Once on scene, Lewis said fire crews established a ‘safe zone’ on the street while ordnance experts from Las Vegas Metro checked out the device.

“I don’t know the actual outcome of it all because they are evaluating it but it was believed to be a hand grenade,” he said. “We brought in a Las Vegas armor team who secured it and took it away.”

The Nye County Sheriff’s Office did not respond to a request to determine whether the grenade was live and posed an actual threat.

Last month, local emergency crews were called to a north side residence after a military-grade tank round was discovered and removed by Nellis Air Force Base officials.

Lewis noted his crews always responds to certain emergencies knowing the possibility that live ordinances or ammunition may be present.

“It is something that we are cognizant of on each and every fire we respond to,” he said. “In some cases now, when it doesn’t involve a fire, we come across citizens who are reporting them to us and we have a process in place with the sheriff’s office.”

The man who found the grenade actually picked it up and brought it inside the home, which Lewis noted is never a good idea.

“We always make the presumption that it is live so we want to take every step necessary to make sure it is not touched or disturbed. If someone believes they found something, they should just call us.”

Also on Monday, Lewis said two coincidences led a caller into believing an aircraft had crashed.

“We had a report of a downed aircraft near the area of the dry lake bed on the very south end of town, but it was apparently unfounded,” he said. “There was a low flying plane in the area and a controlled burn was going on at the same time in that area. It appears someone got the impression that the plane went down and then the smoke conditions from the unauthorized control burn gave the impression that a plane crashed.”