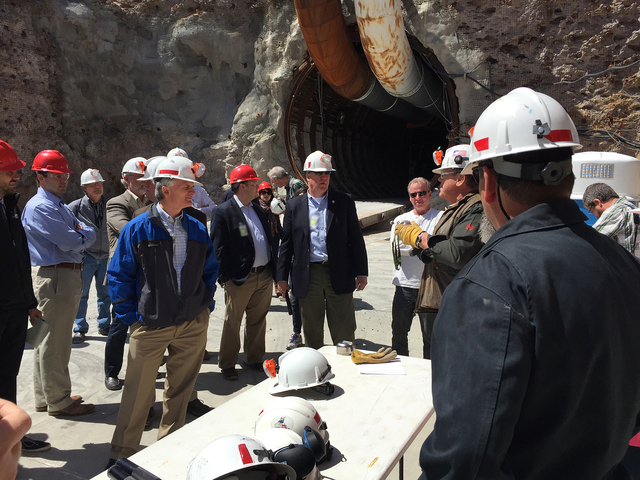 President-elect Donald Trump’s pick as energy secretary, Rick Perry, is not saying whether he intends to push for a revival of plans to entomb the nation’s highly radioactive waste at Nevada’s Yucca Mountain.

But Perry’s 14-plus years as Texas governor might hold clues to his views, as he then supported creation of a temporary site in his state to store highly radioactive spent fuel piling up at nuclear power reactors there for decades.

Applying that approach nationally could postpone a day of reckoning on Yucca Mountain or another permanent repository by 40 years or more, giving Nevada officials and other opponents additional time to muster political and scientific arguments against burying it in tunnels at the Nye County site.

President Barack Obama defunded the Yucca Mountain project in 2011, and it has repeatedly been declared “dead” in recent days by outgoing Senate minority leader Harry Reid of Nevada. At a minimum, experts say it would take more than a decade and could cost $30 billion before the shuttered Yucca underground dump site could be licensed and start accepting the first waste shipment.

But with political pressure building to find a permanent home for the approximately 84,250 tons of spent fuel assemblies from commercial power reactors and waste from defense sites, some observers say the Trump administration might try to put Yucca Mountain back on the fast track. Under a federal law passed in 1987, the Nye County site remains designated as the permanent repository for the waste.

If confirmed, Perry will play an important role in deciding whether to continue the current policy of seeking a state willing to become the permanent home for the waste or setting a new direction.

Over his political career, Perry has generally been supportive of the nuclear energy industry and the need to find a permanent solution for storing the dangerous high-level nuclear waste. But a review of his public statements and documents signed during his time as Texas governor by the Review-Journal found nothing explicitly endorsing Yucca Mountain as the repository.

Perry’s spokesman, Marc Palazzo, declined to clarify where the nominee stands on the matter.

“We will defer on responding at this time,” he said in an email to the Review-Journal.

But Perry’s tenure as Texas governor from 2000-2015, suggests he might be amenable to delaying a decision on a permanent storage strategy and instead allowing willing states to temporarily host the waste after it is placed in “dry casks” — stainless steel canisters surrounded by concrete. In March 2014, he backed a plan to store it at a facility in his own state.

“I believe it is time for Texas to act,” he wrote in a cover letter to a report on radioactive waste storage options for the Lone Star state’s Commission on Environmental Quality.

“We have no choice but to begin looking for a safe and secure solution for HLW (high-level waste) in Texas — a solution that would allow the citizens of Texas to recoup some of the more than $700 million they have paid toward addressing this issue,” Perry wrote.

Perry was referring to money that Texas ratepayers had paid at that time into the nuclear waste fund for operating four nuclear reactors at two power plant sites. The projected financial benefits would come in the form of jobs and an expanded tax base, Perry indicated.

The temporary storage approach also was floated in November in Las Vegas by the Department of Energy’s current point man on the issue: Andrew R. Griffith, deputy assistant secretary for spent fuel and waste disposition for the Office of Nuclear Energy.

Creation of a temporary storage facility for the high-level radioactive waste would require Congress to amend the Nuclear Waste Policy Act to allow the federal government or utilities to pay a private contractor to operate and be paid from the Nuclear Waste Fund.

That process also could be used to reopen consideration of two other sites that were in the running before Yucca Mountain was deemed the sole site to be studied for a nuclear waste repository in 1987: a volcanic basalt formation in Hanford, Washington; and a salt-bed formation in Deaf Smith County, Texas.

Former Yucca Mountain Project chief scientist Michael Voegele said that his team considered Yucca Mountain to be the best site of the three but was “shocked” by the decision to limit the study to a single site.

“We were prepared to study all three,” he said last week.

Only one company, Waste Control Specialists LLC of Texas, has a license application pending before the Nuclear Regulatory Commission to establish an interim storage site.

The monitored, retrievable waste facility in Anderson County proposed in April could store up to 44,000 tons of highly radioactive spent fuel – a little more than half of the nation’s current accumulation — for 40 years, with an option for a 40-year extension. The NRC is accepting public comment on the scope of the environmental review that should be conducted while waiting for the company to provide more information for a safety review.

Perry “has very good knowledge of nuclear waste issues” and will have “quite an influence at the Department of Energy” if he becomes its secretary, but would not have too much clout in licensing matters before the NRC, he said.

Trump, on the other hand, could put the process to find a permanent nuclear waste repository back on the front burner if he so desires, said Nevada’s point man on the project, Bob Halstead.

The Trump administration will have some $20 million in non-obligated Department of Energy funding that it could use to get the ball rolling, said Halstead, executive director of the Nevada Agency for Nuclear Projects. Trump also could appoint a new NRC chairman who could jump-start hearings on the DOE’s license application for Yucca Mountain, he said.

So far, Trump has not taken a position on Yucca Mountain, saying in an interview in October with Las Vegas TV station KSNV that he was studying the matter.

“I’m going to take a look at it because so many people are talking about it,” the then-GOP presidential candidate said. “I came into town, and everyone’s talking about it. So I will take a very strong look at it.”

The following month, Bloomberg News quoted two unidentified people “familiar with Trump’s transition planning” as saying that revival of the project was being discussed.

Reid, who led the opposition to the project during his long run in the Democratic leadership in Congress, said Trump’s vow to cut federal spending alone means Yucca Mountain is off the table. Based on previous estimates by DOE and NRC, it would take at least $2 billion to complete the Yucca Mountain licensing process, in addition to about $670 million already spent, according to Nevada officials.

“I thought they were interested in balancing the budget,” he quipped later.

Reid also noted that Obama’s Blue Ribbon Commission on America’s Nuclear Future, formed to study the issue after Yucca Mountain was defunded, “determined that what should happen is there are states who want this. So if that’s the case, we’ve got a deal. Let them take it.”

Halstead said Nevada’s political leaders, who are nearly united in opposing the project, probably will learn more about the administration’s position soon after Trump’s inauguration on Jan. 20 if the site is back in play.

“We will know Jan. 21 or so whether they’re really going to come out and pursue restarting the project,” said Halstead. “They may not want to pick a fight with Nevada. … Then again they may want to do something quickly.”