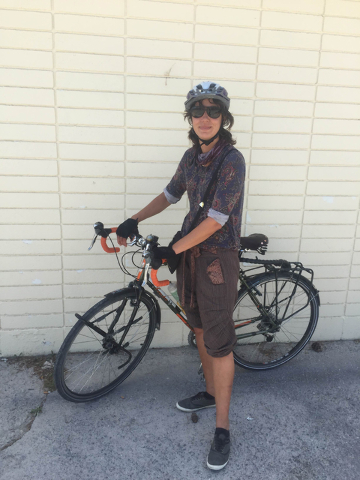 Quitting your day job to travel around the world seems like a fantasy to most, but to one English woman, it is reality.

Rubina Soorty quit her job as a physiotherapist one day when the urge to get out and explore the world overtook her everyday train of thought.

“I was working and each day started to become quite similar and I was finding it a little bit monotonous,” Soorty said Wednesday as she stopped in Pahrump. “At work, my boss asked me ‘where do you see yourself in a year?’ and on the spur of the moment I said, cycling around the world.”

Although she wasn’t fully committed to that idea when she first said it, eventually she put in her notice at work and everything began to sink in.

“It was a little bit strange because I hadn’t really spoken to my work so much about it, so when my co-workers asked me the reason, I told them it was because I was cycling around the world and thought I was joking,” she said. “After they understood it was really what I was leaving for, it actually then began to sink in for me too, knowing that it was really what I was going to do.”

Soorty has been a traveler most of her life. But she never did a long-distance trip on her bike before, but chose that mode of transportation figuring it would help go into places she might otherwise not.

The day she put in her notice and was preparing to to set out on her trek once her final month at work wound down, Soorty’s mother received grim news, which derailed her plans momentarily.

“I told my mom in a month’s time I would be going on this bike trip and she said, ‘well I went to the hospital and I found out I’ve been diagnosed with cancer and that I’ve got six months to live,’” she said.

So instead of the bicycle trip starting after her final day at work, Soorty stayed home in North Hampton, England and spent a lot of time her ailing mother.

As they talked and her mom got sicker, Soorty’s mother asked her to do something in her honor once she passed on.

“My mom asked me to take her ashes with me on my trip so whenever I thought of her, or found a beautiful, amazing place, that I would scatter some of her ashes,” Soorty said.

Soorty also vowed to raise money for the hospice that her mother spent her final days in, in order to show her gratitude for the care they showed her mom during her final weeks.

“My current trip I am raising money for Cynthia Spencer Hospice, because the staff there was amazing, and when you’re going through a horrible time, it’s really important to have good people looking after your loved ones,” she said. “It’s always good for people to be there to help with pain, so you can concentrate on enjoying your time.

“You know they’re going to be your last few conversations you have with that person, and possibly the last one each time you speak with them. So it has to be things you really want to say to them.”

Before Soorty could set out on her trip after her mother died, her grandmother had a medical episode, that again paused the trip.

“So after me mum passed away she (her grandmother) had a stroke, and my trip was set back again,” she said. “When she was back on her feet she was getting very excited and was joking that she wanted to come along with me if I could fit her in my luggage.”

So in honor of her grandmother she started her trip at her home in North Hampton, a town just north of London, England.

Her trip was supposed to come full circle and conclude at her grandmother’s house once it was over, but her grandmother passed away six months ago as she was on her trip so those plans were canceled.

“It wouldn’t be quite the same when I go home this time, but it still will be nice when I do get back there.”

Her now two-year long trip has taken her through 22 countries and things haven’t been completely smooth along the way.

Of the many countries she’s been to, many warned her not to go to Turkey because of the perceived high danger there. On her journey she found the country to be quite the opposite what the majority think.

“It (Turkey) was a really good place to cycle through and the people were just absolutely lovely,” Soorty said. “A lot of evenings I would be cycling on the road, and come the end of the night I would ask where I could camp, and the people would say, ‘you don’t need to camp, come to our home. The amount of invites you get in Turkey is wonderful.”

Another country she traveled to that doesn’t get the best publicity is Iran and like Turkey, she found the people to be very hospitable.

“They were so welcoming as well. I didn’t feel scared in that country,” Soorty said. “I had one experience where they were afraid for my safety, so one of the mayors over there put on a seven-car escort for me, just to that I could get safely through the area.”

Her contact with the mayor didn’t end there, as she was emailed by him after she had left the country to show her his new hobby.

“I’m still in touch with the mayor and after he’d seen me cycling through there, he took up cycling himself, which is really nice.”

Soorty’s time in town will last a few days, where she is staying with a local family. She’s already found the residents to be kind and generous.

“It was such a nice welcome to Pahrump,” she said. “It’s been really friendly. I stopped and got ice cream and got to talking with someone and they said, ‘come to breakfast with me tomorrow morning.’ It’s just been such a welcoming place so far.”

She is heading to the city over the hump next, as she has spent so much time on the road lately, she is ready to enjoy herself for the weekend.

“After here, since it’s so close by I’m going to Las Vegas,” Soorty said. “That will be a little time off the bicycle. I’ve not done much partying in a while, so I think I’ll have to do a little bit more partying in Vegas, and try some gambling and things like that.”

She doesn’t have a set time frame when she’ll end her trip, for now she is going where the wind takes her. At this moment she plans to head down through Arizona, New Mexico and Texas, eventually ending up in South America.

For those who have aspirations to take similar trips Soorty explained that although it’s nerve-wracking at first, don’t let that initial fear hold you back.

“I wouldn’t worry about being nervous or anything, don’t let that stop you,” she said. “For me the scariest part was before I left. Once I was on the road it was not that scary anymore.”