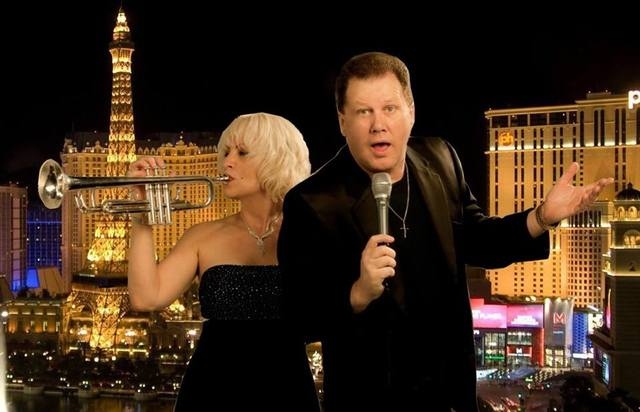 The well-known phrase, “the show must go on,” was taken literally at the Pahrump Nugget’s Stage Bar Lounge on Saturday evening, where the band The Vegas Road Show was performing a two-night stand this past weekend.

The act, for years, is known for delivering all facets of entertainment including music, comedy, and crowd participation.

Though all went well during their Friday night performance, Saturday night’s performance, according to saxophonist “Downtown” Michael Brown, was a bit touch and go for most of the day after the group’s lead singer and guitarist, Cody Stevens, was struck by an automobile while crossing the intersection at Highways 160 and 372 just after 11 a.m.

Brown said he was amazed to see his bandmate arrive back in Pahrump just in time for the second show after being air-lifted to University Medical Center trauma unit in Las Vegas hours earlier.

“Instead of bringing Mercy Air to a very congested intersection, we opted to transport him to Base 21, and he was subsequently flown to UMC Trauma,” Lewis said. “In fact, that was the only flight we had over the weekend.”

Stevens was just running a few errands Saturday morning when the accident occurred as he was crossing Highway 160.

“Cody is doing a lot better right now,” Brown said Monday. “The side of his body looked like a giant road rash and I really felt bad for him. From what I understand now, he was just walking across the highway when this person hit him.”

Additionally, Brown, who has known Stevens for more than a decade, said he was at a loss for words when he learned his friend and bandmate wanted to play that evening.

Prior to Stevens’ return to Pahrump from UMC, Brown said he was considering looking for another guitarist to sit in for Stevens.

“He played and did a great job.” Brown said. “I couldn’t believe he was actually doing it. He’s the guitarist and lead singer for The Vegas Road Show. A lot of guys would have taken the night off and call in a replacement, but he forged through and did the show.”

“It was great,” he said. “I had a few people come up from Las Vegas to see us play, and that was really an honor to see that happen.”

According to their website, Cody Stevens and his wife, Barbara Christy, are veterans of the entertainment industry and the heart of The Vegas Road Show.

Stevens is a 30-year veteran of Las Vegas and has performed with many national acts, such as Danny and the Juniors, Del Shannon, the Box Tops and Chuck Berry.

Nevada Highway Patrol did not return an inquiry seeking more information about the incident by press time.