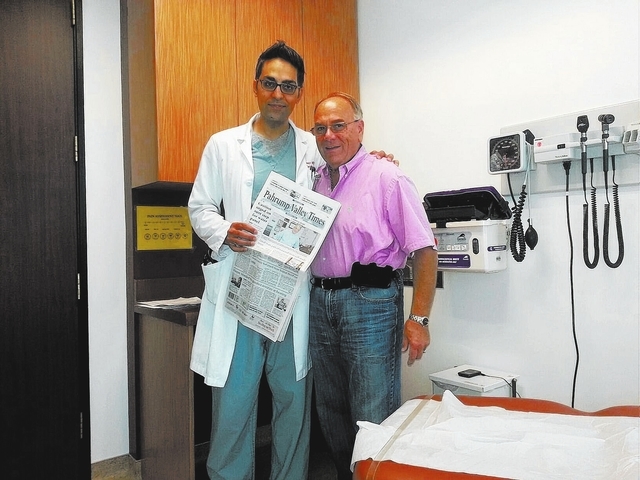 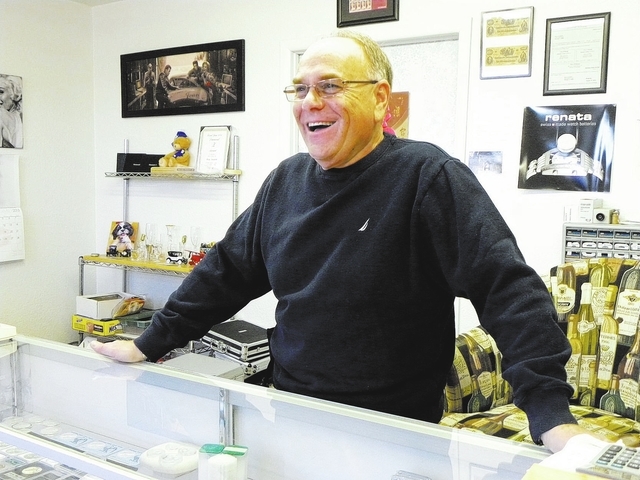 Just two months after one local man underwent an experimental heart procedure at the University of California, Los Angeles (UCLA), he says he is doing well and hopes results of the procedure will one day help other heart patients.

Marty Greenfield, owner of Jewelry and Appraisal Consulting on Matthew Lane, says he has lost 31 pounds and his energy levels have increased since he had what he and a team of doctors hope were his own stem cells injected into his heart as part of an experimental study funded by Baxter Healthcare Corporation.

Greenfield suffers from a painful heart condition known as angina, which occurs when there is inadequate blood flow to the heart.

On Oct. 17 Greenfield underwent an experimental procedure that is part of Phase III of a clinical trial called RENEW that uses a patient’s own blood-derived stem cells to restore blood circulation to their damaged heart. The trial uses the latest technology to map the heart in 3D and guides doctors to deliver the stem cell injections to targeted sites in the heart muscle.

Although neither Greenfield nor his team of doctors at UCLA know yet if he received his own stem cells or a placebo, Greenfield says he has begun to feel slightly better than before the procedure. And either way he is just happy to be part of a study that could one day help thousands of people worldwide.

“The most important thing about what has occurred since you saw me more than a month ago is my stamina has been tremendous, absolutely tremendous so far,” Greenfield said of his progress. “I used to have to go to bed around 7:30 p.m. or eight o’clock because that’s as far as I could go after working all day, but now I’m good until 11 or 11:30 p.m. if I’m in a relaxed atmosphere. There have been times I haven’t gone to bed until 12:30 a.m. and then gotten up at 6:30 a.m. to start my day…My physical condition has also improved in stature. I’m 31 pounds thinner, so I’m happy with that.”

Although he has more energy and has lost some weight, the procedure hasn’t been without side effects.

For several weeks following the injection Greenfield said he suffered from an intense pain in his abdomen and his blood pressure has been both high and low over the last two months.

“They had a few problems with my blood pressure, but they’ve been able to stabilize that. But keep in mind since my body has been invaded with all of these procedures there is the tendency for that to be erratic,” he said. “The abdominal pain I was experiencing for a long time, one day I woke up and it was gone. When I first brought that up to the doctors, they thought it might have been an acute abdominal issue, not necessarily that, but there was no rhyme or reason to it to contradict that. But one day I woke up and it was completely gone after I had just complained about it the week before. I’ve had nothing since then, so they have actually documented it as a possible side effect.”

While Greenfield is happy with the progress he’s made so far, whether that’s just from the medication changes his doctors have made for him or he actually received the stem cell injection and it’s working, he said it’s still hard for him to believe sometimes that he was lucky enough to have been asked to be involved in the RENEW study.

“Nobody looks at the mental side of what a patient has gone through. You endure a lot of pain, you endure a lot of discomfort. The injections were so bad I was like climbing the walls. But you just don’t realize the mental state you go through. At times I am on top of the world, I’m so blessed and I have every reason to be full of jubilation that I’ve been given this reason to live, but there are moments, whether it’s the adhesion in my neck that’s killing me from where they did the injection, or you think about what did I really go through, what did my body really have to endure? And it’s hard to believe what you’ve been through,” he said.

Since his procedure two months ago, Greenfield said Baxter has temporarily suspended research with new patients at UCLA.

“Baxter has suspended all future candidates to stem cell heart injections for UCLA. I am the only candidate that received the heart injections,” he explained, but said the company is still going forward with his research.

“I am so blessed and when I talk about it I cry and tears come to my eyes because there are so many people out there who need this help, but I’m blessed to know that even though it’s suspended, I’m the only one who got the injections from UCLA, which is huge. Baxter has not stopped my research. So in other words next month there’s some additional testing with me they’ve never done before,” he said.

Although he hasn’t been told officially one way or the other if he truly received the stem cell injections, Greenfield said the most important thing to him is still that the data his team of doctors could help others suffering from heart conditions similar to his own.

“It’s a remarkable dream,” he said. “Being in the right place at the right time and to have my body to be the right guinea pig for Baxter to take a chance with me. And like I’ve said all along, I’m not just doing this for me, I’m doing this so one day they will hopefully be able to take this research and help others.”

For more information about the RENEW study or to find out more about the cardiology unit at UCLA contact the hospital at 310-794-4797.