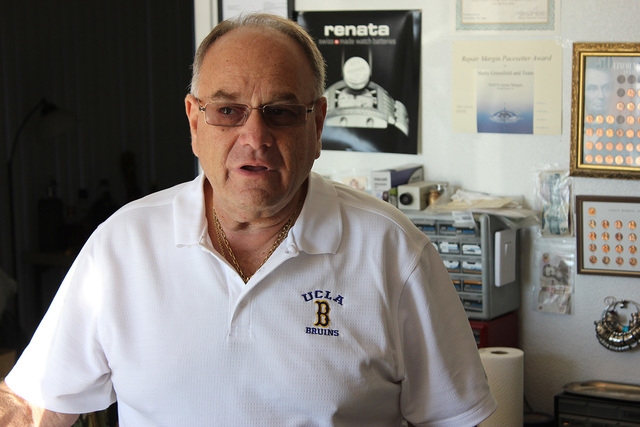 Standing at the counter of his jewelry and appraisal consulting shop on Matthew Lane, Marty Greenfield is happy to be alive. He said he feels blessed to be one of 112 people chosen to participate in a study on the affects of stem cells on a damaged heart. The clinical trials were funded by Baxter Healthcare Corp.

Greenfield had his first stem cell procedure on Oct. 17, 2013. Now, a year later, Greenfield stands in his shop with a smile on his face. He said he is full of energy for his 65 years, and reports he has improved health for the first time in over 20 years. After the procedure was done, Greenfield said he experienced severe pain but only in the neck area at the transfusion entry point and that pain has only recently subsided.

The initial clinical trial began with 444 participants, however, Baxter reduced the number to just 112 with Greenfield being number 112. “I feel like I am the luckiest 112th person in the world,” Greenfield said.

Greenfield said his health has improved and he has been hospitalized once since the procedure. “This isn’t about me. I am extremely humbled by this. The end result of this is to help humanity. And, I hope it works, truthfully,” Greenfield said.

Greenfield said he had troubles with his heart and severe chest pains for more than 20 years, sometimes it was so severe he would be rushed to an emergency room for fear he was having a heart attack. After visiting countless doctors and cardiologists, he was diagnosed with a condition known as angina.

Angina is a painful heart condition that causes blood flow to the heart to be limited or reduced which results in chest pain, sometimes mimicking a heart attack. There is no known cure at this time.

After being told he would need a heart transplant, Greenfield said he was on a mission to find some way of reducing his pain.

Greenfield found a local doctor who recommended he become part of Baxter’s clinical trial called “RENEW.” Through the double-blind clinical trial, the patient’s own stem cells are harvested from blood , separated from other components of blood cells and then injected back into the heart in an effort to improve or restore blood circulation.

At his last UCLA appointment Greenfield had to perform a stress test on a treadmill. He said, with a huge smile, he was able to do 16 minutes compared to the mere three minutes when he first began the clinical trials.

“After that last treadmill test, I could have done another 10 to 15 minutes but my knee was giving me trouble,” Greenfield explained.

Greenfield’s best friend, Elizabeth Sterling said that she calls him, “bionic. Before this, I noticed that he had almost no energy and he didn’t have good color. Now, he’s like a whole different person.”

After a year, Greenfield said his body is still undergoing adjustments.

Greenfield is the only recipient in Nevada to participate in the stem cell study and the only participant in the UCLA clinical trial.