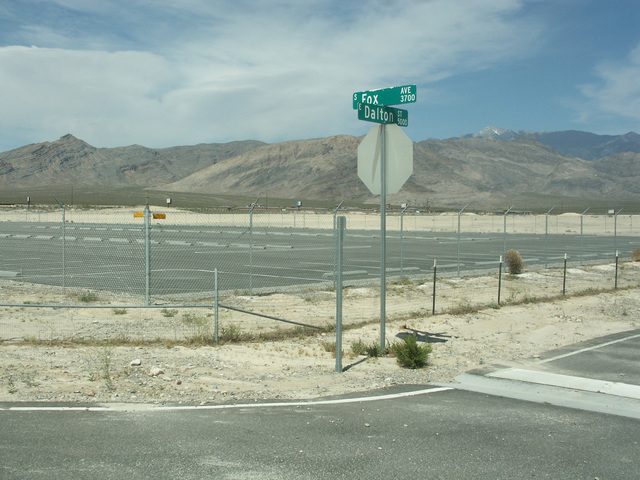 A launching site has been approved for local residents wanting to celebrate July 4 and other holidays with fireworks.

Nye County Commissioners amended an existing law May 5 for the use of consumer fireworks in the Town of Pahrump to allow for the special exception.

Casey Steinhart, regional general manager for Pahrump’s Area 51 Fireworks store applauded the commissioners for their efforts in amending the law, which allows for the use of aerial fireworks to be used only at the Pahrump Fairgrounds.

“It has certainly been a long time coming for Pahrump especially when you consider we have a number of stores here in town,” he said. “We made the first move last year where individuals could use ground-based type fireworks and now they are able to use all of them.”

County commissioners worked with the fireworks retailers in town, as well as the local fire department and law enforcement to update law, which Steinhart said was confusing at best.

“With the previous ordinance you had 24 hours to purchase your fireworks and take them out of town but now you’re allowed to have them but you just can’t legally shoot the aerials except at the launching site,” he said.

The amended law, according to County Manager Pam Webster, will also benefit both the town and county in terms of generating new revenue, as each customer who purchases fireworks must pay a nominal safety fee.

“I think the opportunity to have a site to shoot the fireworks at is a great thing,” she said. “It works well for people to shoot at a safe and secure location and it offers a revenue stream for the town to improve the fairgrounds in the future.”

Additionally, the fees will also go to the overall construction of the fairgrounds, which crews will soon install the infrastructure to include power and water, Steinhart said after meeting with local officials.

“No matter what someone purchases, there will be a $5 safety fee which goes towards the future of the fairgrounds. It also goes to the fire department and sheriff’s office for operations at the launching site,” Steinhart said. “Obviously we are really looking forward to getting it open so residents can go down there with their fireworks and they will have a permit that legally lets them go there.”

Pahrump Valley Fire and Rescue Chief Scott Lewis said he and Buildings and Grounds Manager Matt Luis met with those involved to create a plan which focused mainly on public safety at the site.

“We created some safety rules and parameters for people to utilize and also to prevent people from overusing or abusing the product,” he said. “We think we placed the necessary steps to ensure everyone’s safety, as long as the human behavior follows.”

Town and county officials may soon learn how individuals behave with their fireworks, as they plan to open the site in roughly two weeks.

Steinhart said there will be personnel on-site to direct the people to the various launching sites.

He also said the site would be a great vantage point for those who wish to come and just watch the fireworks.

“We are now finalizing some of the agreements and we should be able to get this open by Memorial Day weekend,” he said. “It will not be open all year-round but it will be open periodically throughout the year and your permit will allow you to go to the next available time that it’s open.”

Though it’s still too early to tell, Steinhart said he may, or may not see an increase in fireworks sales as the July Fourth holiday approaches, but he remains hopeful.

“I hope we do see an uptick in sales but at the same time our ultimate goal is have a place that’s safe where people can go and enjoy themselves,” he said. “The safety fees are going to raise a lot of money for the county. Right now all there is a parking lot and a big open field. There will eventually be water and electricity in there and we hope it will be a good destination spot for the community.”

Steinhart lauded the commissioners in approving the site for those in the community, and commended town and county staff for the work that was put in getting the project approved.

“We are very excited about getting this up and going,” he said. “Once we get this first one ironed out we’re going to try to open up additional sites.”