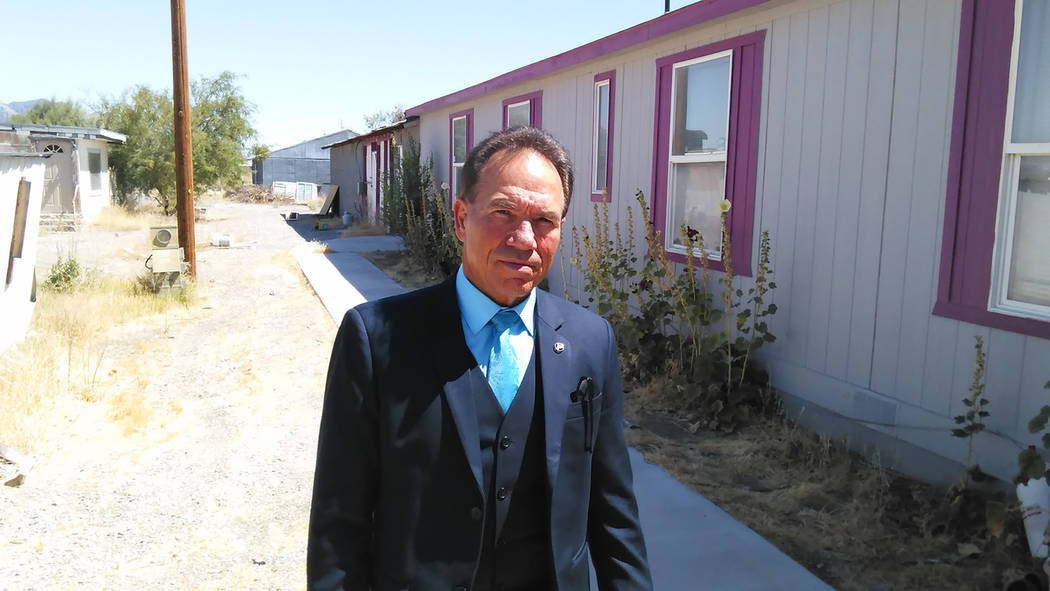 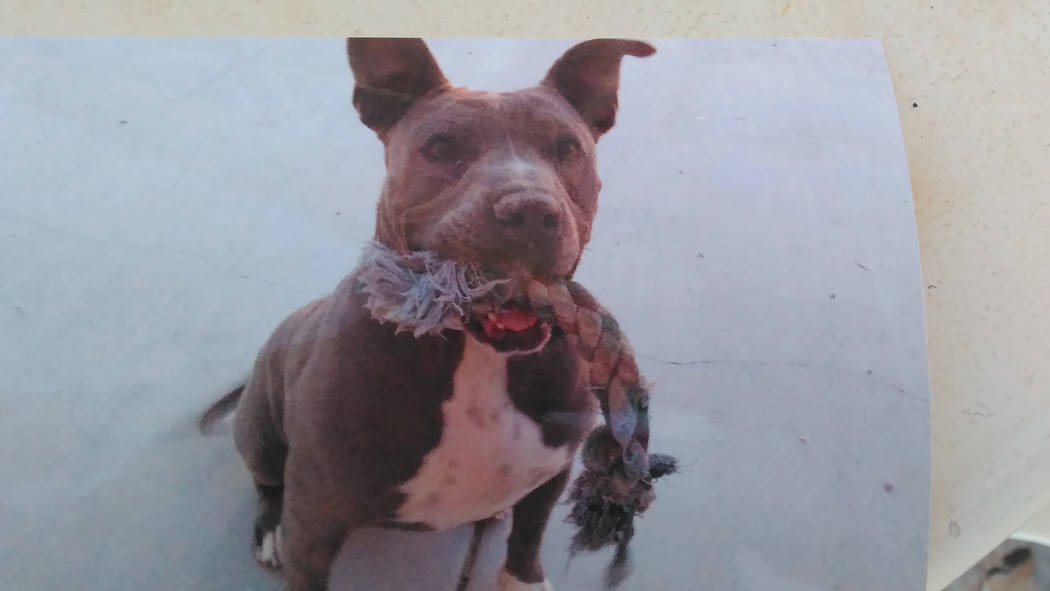 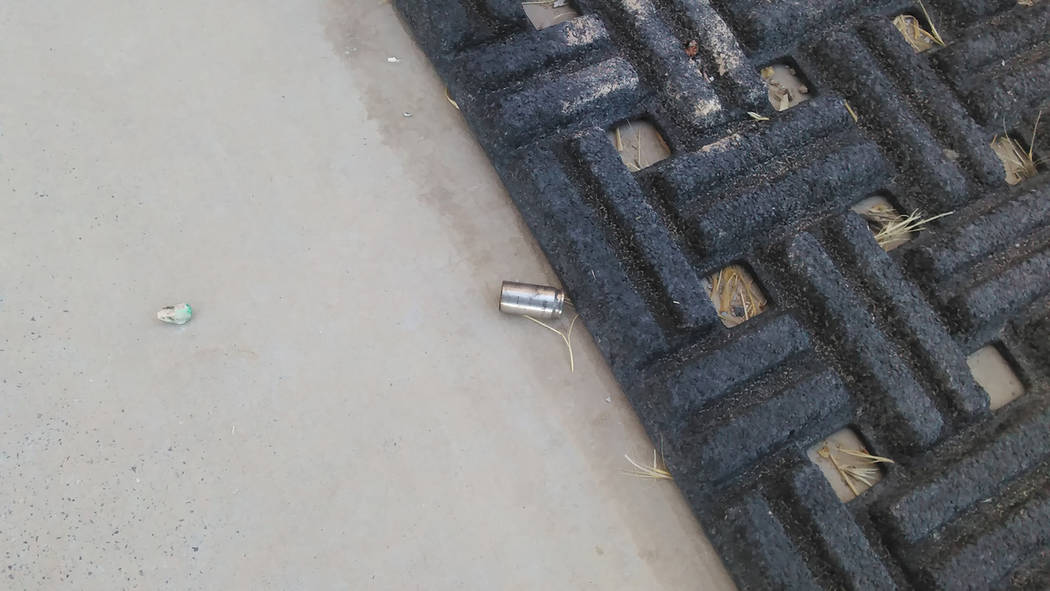 For Pahrump resident Gary Miller, April 10 of this year is a day he will never forget.

Miller’s longtime companion, Blu, a 6-year-old pit-bull-mix breed, was shot and killed by a Nye County Sheriff’s deputy responding to a residential alarm on the 2700 block of Our Road where Miller resides.

Miller had owned Blu since the dog was just 5 months old.

Nye County dispatchers received a call from a residential alarm company advising that seven panic alarms had been activated within a short amount of time at the residence at 4:23 p.m., a sheriff’s office news release said.

The responding deputy arrived at the home to handle what was considered an emergency situation.

Upon arrival, the deputy entered the fenced property and approached the residence in order to come to the assistance of the home’s occupant.

“As the deputy knocked on the door, the resident’s dog suddenly charged the deputy from another location on the property and attempted to attack him,” the release stated. “Fearing for his safety and due to the rapidly-evolving threat from the aggressive animal, the deputy drew his firearm and discharged it at the dog to protect himself.”

As a result, the animal sustained a severe gunshot injury, which immediately ended the threat to the deputy’s safety.

Shortly thereafter, the release stated Miller exited his home and made contact with the deputy.

“The subsequent investigation revealed that the multiple panic alarms had been falsely activated within the home and no actual emergency existed,” the release also stated. “Additionally, the property did not have any posted warning signs for an aggressive dog. The deputy was not injured during the incident.”

A Nye County Animal Control officer was summoned to the scene and transported the wounded dog to a local veterinary clinic, where it was eventually euthanized due to the severity of its injuries.”

Miller, meanwhile, provided a much different point of view of the events leading up to the shooting.

He said his in-home security system was sending panic alarm signals to the monitoring company, which in turn notified the sheriff’s office and himself.

He said no emergency situation existed at the time, as the alarm was eventually deemed false.

Nonetheless, after a deputy arrived on the scene, Miller said he heard knocking on his front door, when seconds later, he heard gunfire.

Miller also said the deputy told him the dog was in attack mode.

“I told him that Blu was not aggressive and the deputy said that he was barking and growling at him,” he said. “…Blu did not attack this officer, and his body-cam video shows that Blu was casually running up to the deputy to see who had come to visit, and maybe he had treats, because my friends all bring Blu dog biscuits or treats when they come over.”

After doing some research, Miller said he learned the state of Nevada requires all law enforcement officers to take a training course to learn procedures for encountering dogs.

“The Department of Justice’s Community-Oriented Policing Services, or (COPS), puts out free training material, which is what is on the website for the law enforcement post-certification,” Greisen said. “This was completely unjustified …”

Additionally, Greisen said law enforcement officers are provided training videos on how to approach and handle a situation involving animals on private property.

“On the dog training video, they show you, from start to finish how to approach a house, how to shake the gate, how to put something between you and the dog,” she said. “They also tell you to turn sideways and not to stare at the dog. You can use pepper spray or a Taser.”

In a news release, Nye County Sheriff Sharon Wehrly did not dispute the audio picked up by the body cam.

She did, however, say that the situation is under investigation.

“Immediately upon reviewing the body camera footage, I started an internal affairs investigation into the actions that occurred that day,” she said. “The investigation is continuing and I can assure you, appropriate action will be taken by the Nye County Sheriff’s Office upon the completion of the investigation.”

Wehrly also noted that she sympathizes with Miller’s loss.

“I am committed to ensuring all contacts with the public and their pets are appropriate and within the scope of training that the deputies have received,” she said. “I have been an animal owner my entire adult life and sympathize with Mr. Miller on the loss of his family pet. I do not take this loss lightly.”

Additionally, the sheriff said the incident highlights exactly why she’s been dedicated to ensuring all sheriff’s deputies wear body cams while on duty.

“Video of this incident demonstrates exactly how body-worn camera footage allows me, the sheriff, to see exactly what took place and take appropriate action,” she said.

The deputy “was provided immediate remedial training prior to his return to patrol responsibilities to ensure his interactions with the public and their pets are appropriate while an investigation is being conducted,” Wehrly said. “I hold my employees to a high standard in the way they interact with the public and do not take the shooting or my staff’s subsequent actions and conversation lightly.”

Wehrly said following the investigation, she will take appropriate action against any individuals found to have acted in a manner not consistent with the standards they are expected to satisfy within the confines of the law.

“Upon the conclusion of the investigation, I will release the results of that investigation and actions that were taken.”