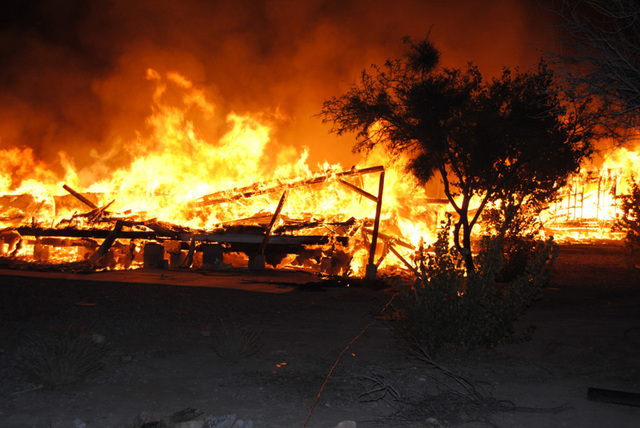 It was a busy holiday weekend for local emergency crews.

Nye County Sheriff’s deputies responded to a hit and run accident over the weekend that left a pedestrian dead and deputies with little clues on who committed the crime.

Sheriff’s deputies were dispatched to the 700 block of South Leslie Street for a fatal hit and run accident.

Upon arrival, investigators found a male individual lying in the roadway. It appeared the male was struck by an unidentified vehicle, which then left the scene.

“We were dispatched for an unknown type of incident. At some point it was determined that it was a pedestrian versus motor vehicle accident where the victim died on the scene. We provided lighting and helped to assist at the scene. Other than that we really had no involvement,” he said.

The victim’s identity is being withheld pending notification of the family.

The Nye County Sheriff’s Office is requesting any helpful information from the public which might assist in the investigation.

Anyone with information pertaining to this case is urged to contact the Nye County Sheriff’s Office at 751-7000 or by emailing ncso_detectives@co.nye.nv.us case# 14NY-2342.

Also on Monday, fire crews responded to a report of a structure fire at 151 Lexis just after 1:30 a.m.

Upon arrival Chief Scott Lewis said crews were faced with more than they expected when the dispatch initially went out.

“We had three manufactured dwellings that were well-involved in fire and they were totally consumed upon our arrival. It appears that there was a delayed detection because the people who actually occupied another structure were unaware that there was a fire even out there. The cause is suspect and none of the three structures were occupied and no utilities were going to them,” he said.

Highway 160 and Country Place was the scene of yet another motor vehicle accident on Saturday.

“While there was no entrapment, one person was transported from the scene and ultimately flown into Las Vegas where they are expected to make a full recovery,” he said.