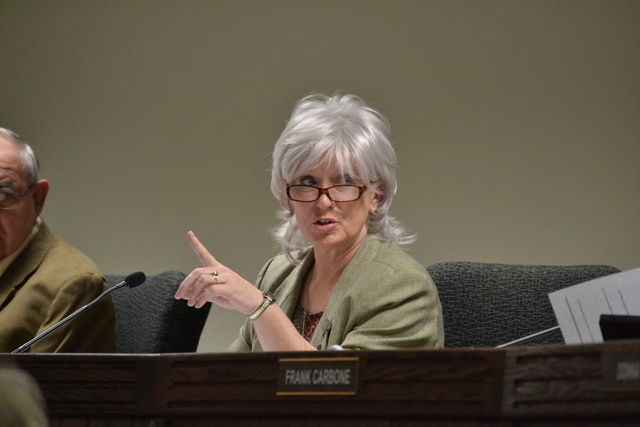 Nye County Commissioners were divided in 3-2 passage of a non-binding resolution in objection to any further implementation of the Bureau of Land Management’s Resource Management Plan.

Cox introduced the proposal for a vote Tuesday after months of delay to fine-tune the measure’s language. The plan provides guidance for use of BLM-administered public lands.

Cox still did not get the language right, according to Wichman, who said that the resolution, as presented, could potentially hurt the efforts of the Nevada Association of Counties Land Management Task Force Committee that has prepared a recommendation to be presented to the state Legislative committee on the congressional transfer of public lands in February. Wichman said there will be a bill on the issue sponsored by state Sen. Pete Goicoechea, who represents Nye County.

Objectionable were use of the words “repugnant” and “deserves the condemnation” as well as other possible inflammatory language, which board members argued could be interpreted in a variety of ways. Schinhofen queried the board, “How would this work to further our goals at the state level?”

Schinhofen then told the board that he had received an email from Ammon Bundy who had reviewed the resolution and urged the Nye County Commission not to pass it as drafted.

The Bundy family, of Bunkerville in Clark County, have long opposed federal authority and have fueled an anti-BLM movement which resulted in an armed standoff with federal authorities in April 2014.

Though the Bundy clan are not residents of Nye County they served in an advisory capacity to Cox in the drafting of the resolution.

District Attorney Angela Bello advised commissioners that passage of the resolution would not justify legal action by the BLM against Nye County, though it is certain that the BLM will disagree with some of the conclusions in the resolution.

Wichman said that Nevada’s 17-counties are seeking the same relief that Nye County is ultimately seeking through the resolution which is more time to to evaluate the impacts of the Resource Management Plan on public lands.

“What we all agree on is we want them to give us more time. We don’t have to have a resolution to do that, we can make a phone call,” Wichman said.

The public comment period for possible changes to the 1998 RMP which outlines permitted use of public lands was extended from Jan. 7 to Feb. 6, after requests from multiple stakeholders, according to BLM personnel. Four alternatives are suggested in the Environmental Impact Statement with a goal of resolving conflicts among permitted uses. BLM’s preferred alternative is “Alternative 3” which would provide opportunities to use and develop resources within the planning area while ensuring resource protection.

Carbone told the board that the BLM was contacted on Friday and asked for additional time to review the plan and to submit public comments. The request, he said, was met with a resounding no.

Following a break, Wichman re-opened the topic for additional discussion and an amended resolution was proposed. The resolution asserts that Nye County has largely been ignored in the creation of the RMP while BLM continues to violate existing Nye County Code. Nye County also asserts that all proposed alternatives threaten environmental damage to the county while negatively impacting its economy.

The county, in a second split vote of 3-2, passed a resolution which resists further implementation of any Resource Management Plan without an adequate extension of time to review all impacts to Nye County. The resolution also states that Nye County will continue to support any action to to “legally relieve the federal government of ownership, control and jurisdiction over public lands.”

Wichman and Schinhofen opposed the measure a second time, with Carbone, Cox and Borasky voting in favor of the non-binding position statement.

Commissioners are hopeful that with other municipalities poised to pass similar resolutions that BLM will have no choice but allow an adequate extension of time for a complete evaluation.