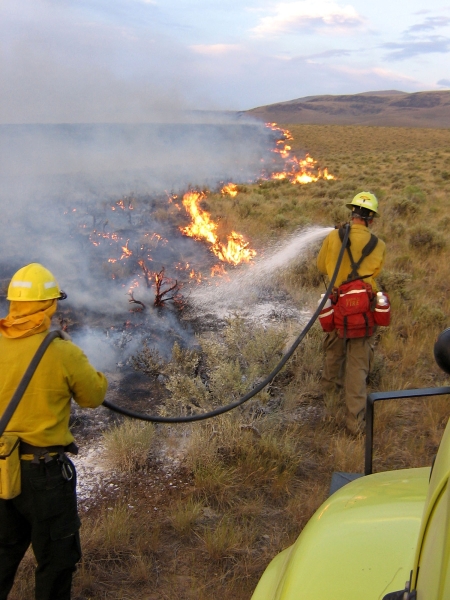 ELKO —The Bureau of Land Management and Eastern Nevada Agency Bureau of Indian Affairs are accepting applications for summer seasonal firefighting and dispatching positions for the 2016 fire season at locations nationwide, including duty stations across Northeast Nevada. Applications must be submitted no later than January 12, 2016 to receive first consideration for most seasonal positions.

To assist those interested in applying for positions, a workshop for potential seasonal employees will be held at the Elko District BLM Office (3900 East Idaho Street, Elko, Nevada) on January 5, 2016. Anyone interested in employment opportunities with the federal agencies supporting summer wildland fire are encouraged to attend.

Government housing may be available at some stations depending on location. Salary for these positions ranges from $11.17 to $24.16 per hour depending on experience, with a normal term of employment from May through September.

Selected applicants for BLM positions must complete a pre-employment drug screening and physical examination prior to appointment and are subject to random drug screening during their period of employment. Applications for BLM firefighting and dispatch positions nationwide must be submitted using the Office of Personnel Management’s USAJOBS website at: https://www.usajobs.gov.

Applicants also must meet certain physical requirements. To learn more about employment with Fire and Aviation management, interested applicants should visit the Employment Opportunities with BLM Nevada Fire and Aviation website at: http://on.doi.gov/elkofire.

Selected applicants for primary firefighter positions with BLM must also pass the “pack test” after entering duty. This test consists of a 3-mile walk over flat terrain carrying a 45-pound pack in 45 minutes or less.

Applicants must be U.S. citizens and at least 18 years of age. The federal government is an equal opportunity employer and all applicants will receive equal consideration without regard to race, color, age, sex, religion, marital status, sexual orientation, national origin, political affiliation, handicap or other non-merit factors.

The Eastern Nevada Agency of the Bureau of Indian Affairs is also accepting applications through April 17, 2016 for on-call wildland firefighters for the upcoming fire season.

Firefighting handcrews consist of 20 men and women who travel to fires throughout the United States, for up to 20 days at a time. They work long hours in remote locations constructing firelines to halt the spread of wildfires. In past years, local ENA firefighters have fought fires across the western United States.

Even though the fire crews are only activated and paid during fires or emergencies, it is an excellent opportunity to gain firefighter training, experience, and earn money at the same time.

Firefighters must be 18 years old prior to June 6, 2016, must be a U.S. citizen, and must pass a pre-employment physical fitness test. The fitness test, or “pack test”, consists of a three-mile hike over flat ground in 45 minutes or less, while carrying a 45-pound pack.

The Eastern Nevada Agency (ENA) of the Bureau of Indian Affairs is also accepting applications through April 17, 2016 for camp crew workers for the upcoming fire season. Camp crew members provide support for logistical needs in fire camps. Camp crew workers must be 16 years old prior to June 1, 2016, must be a U.S. citizen, and must pass a pre-employment physical fitness test and drug test. The fitness test consists of a one-mile hike over flat ground in 16 minutes or less with no pack.

Applications for the ENA crew and camp crew are available from the front desk at the Elko BLM Office, located at 3900 E. Idaho Street in Elko, or on line at http://on.doi.gov/elkofire.

For more information about federal firefighting positions in Elko, please contact the following: