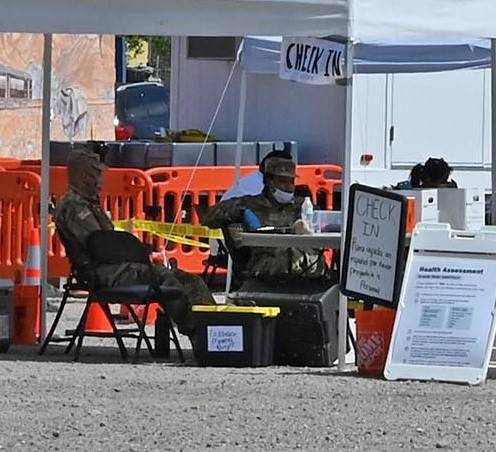 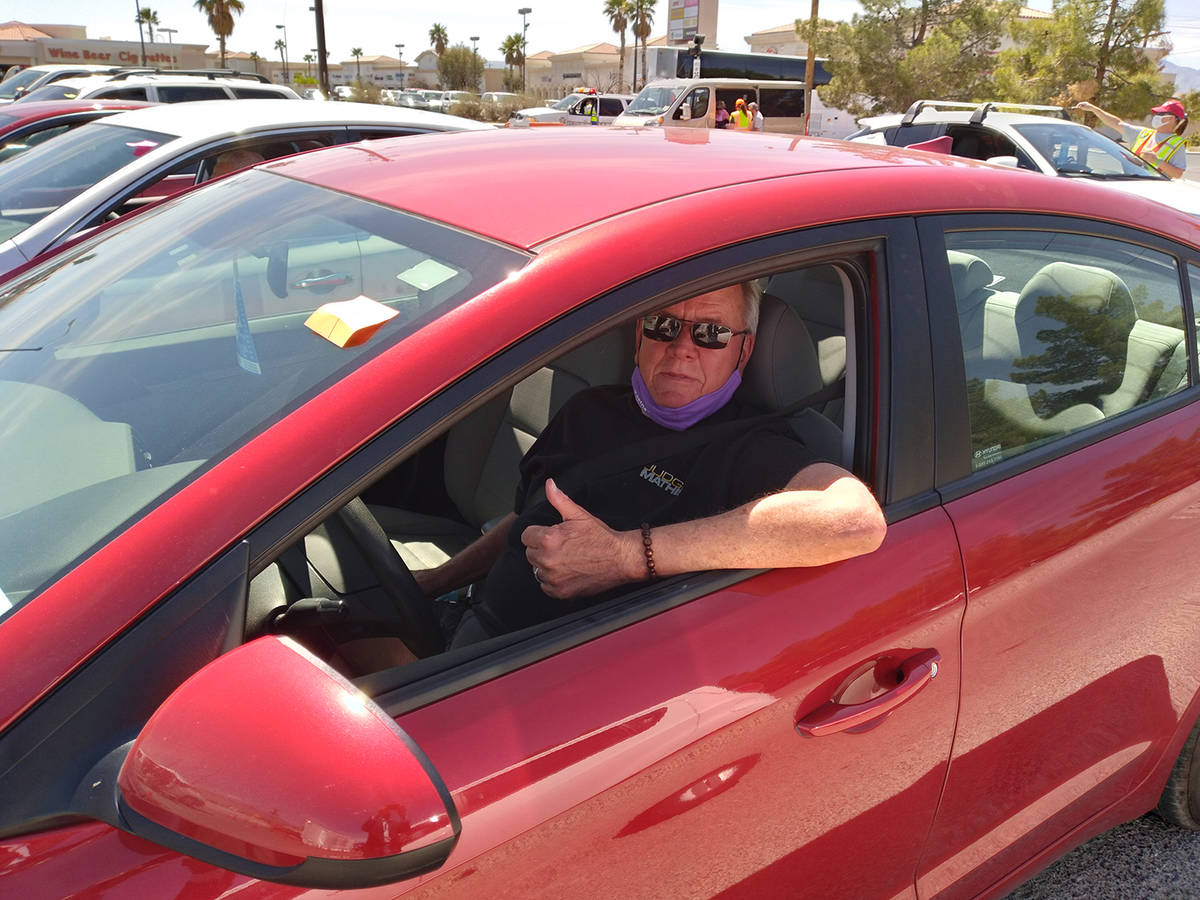 Selwyn Harris/Pahrump Valley Times Pahrump resident Daniel Miller had no qualms about waiting more than an hour to receive his single-dose COVID-19 vaccination Thursday afternoon outside the Bob Ruud Community Center. Miller said he had zero reservations about any possible side effects. 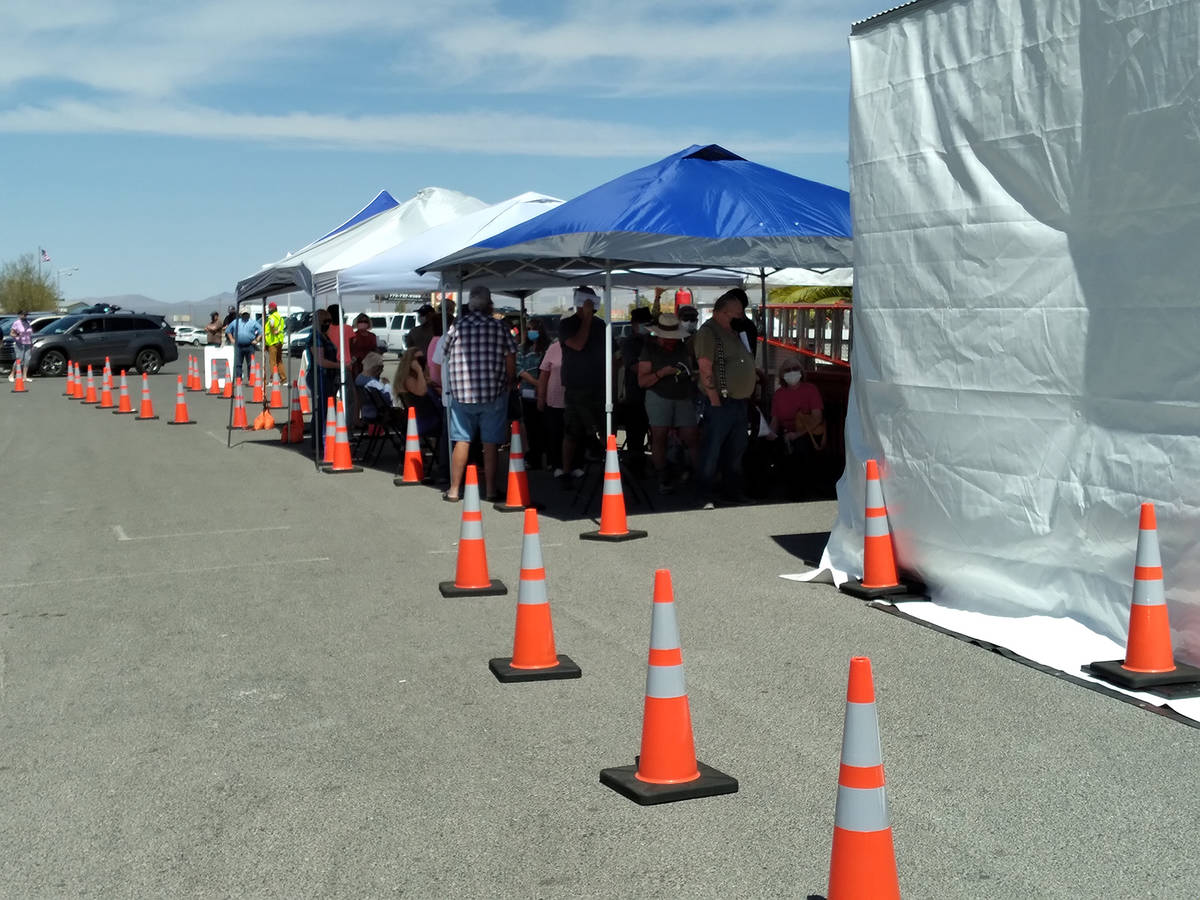 Selwyn Harris/Pahrump Valley Times Nye County Director of Emergency Management Scott Lewis said despite a few logistical challenges in the beginning, health workers are expecting to vaccinate up to 1,500 people within the two and a half days that the vaccination clinic will be in Pahrump.

The mobile clinic was held in the parking lot of the Bob Ruud Community Center, adjacent to Petrack Park along Highway 160, where officials from the Federal Emergency Management Agency, (FEMA), organized the event. Nevada also worked with FEMA on the statewide effort meant to reach rural and tribal areas.

Nye County Director of Emergency Management Scott Lewis said despite a few logistical challenges in the beginning, he was pleased to see how many area residents stopped by to receive their single-dose vaccination.

“We have a FEMA pod underway and they are providing the single dose of the Johnson & Johnson product that has been scheduled with the assistance of the state Department of Emergency Management,” Lewis said. “We have a very good turnout here today, and we had a significant number of people arrive early, so logistically, we are managing that.”

The mobile units are pegged to handle at least 250 people a day. As of Friday, 15,961 vaccines have been administered in Nye County. Broken down, as some vaccines require two shots, 9,901 people have received their first round, with 6,217 people receiving both shots.

Rollout to the rurals

Lewis spoke directly about a few of the challenges he and other local personnel have encountered while managing the aspects of being one of the first pods that has been established in Southern Nevada.

“There is a learning curve because there are a lot of people involved in the process who are not from the area,” he said. “They’re from out of state and I don’t think they have a complete understanding of what it entails working in the temperatures that we have, and just the general conditions. Today is actually going relatively smooth and we will work our way through all of the issues, and we are expecting to vaccinate up to 1,500 people within the two and a half days that the Pod will be here.”

Ashley Thompson, who is the Southern Nevada liaison officer assisting with the mobile vaccination unit from the Nevada Department of Emergency Management, spoke about how the overall operation was coordinated.

“We are currently being allocated by the Southern Nevada Health District in Clark County, so the vaccines have to be transported out here,” she noted. “We are arranging anywhere from 250 to about 500 vaccinations for each day we are here. As far as the age range, the Johnson & Johnson single-dose requires an 18 years of age and older requirement for individuals to receive their vaccinations.”

Thompson also made sure to explain exactly how the vaccination process works.

“An individual just comes up and they will receive a number, and when their number is called, they will receive a registration packet to fill out,” she said. “They will wait in line and then go inside the tent to receive their vaccines from a certified vaccine technician. After that, they will go around to the observation site and wait 15 minutes. As long as they have no reactions, they will be able to leave.”

Regarding the issue of adverse reactions to the vaccination, Thompson said the symptoms tend to vary.

Local emergency services were on the ground to respond to any adverse reactions to the vaccines.

Local resident Daniel Miller was one of many individuals sitting in his vehicle waiting to get vaccinated, with zero reservations about possible side effects.

“I’ve been here for about an hour, which to me is not bad,” he said. “I didn’t have any reservations about getting the vaccine, but it seems that a lot of people do. I feel that people should get it.”

Miller also provided his thoughts on why some people are hesitant about receiving the shot.

“I think it’s the fake news that’s coming out about it,” he said. “People think the government is tracking you with the vaccine, but I have to say there is a GPS on everybody’s smart phone, so it’s crazy. I was never a COVID-19 denier because I’ve got friends that have it, and we have lost about six neighbors to it.”

10-year Pahrump resident Lisa Kronz also offered her thoughts on getting vaccinated, which actually mirrored those of Miller.

“I’ve been waiting about 35 minutes so far,” Kronz said as she also waited inside her vehicle. “I didn’t hesitate on getting vaccinated because that’s the way we got rid of all of these other bad things like polio, the measles and mumps, so that’s how we get rid of it.”

Kronz also offered up her assessment about why some individuals are reluctant to get the vaccine.

“I think many people are hesitant to get the vaccine because there has been a lot of false information that has been shared,” she said. “The government is not microchipping you, or changing your DNA. All of that stuff is nonsense and absurd. We had vaccines for decades and that’s why we all do not have polio outbreaks in this country. People should get their vaccine because it’s about the greater good. It should not be political at all.”

Meanwhile, Thompson lauded the efforts of those who stepped forward to offer their skills and service in relation to the vaccination clinic, where she singled out a nonprofit organization known as “Team Rubicon.” The nonprofit utilizes the skills and experience of military veterans along with with first responders to rapidly deploy emergency response teams across the United States and around the world, by providing immediate relief to those impacted by disasters and humanitarian crises.

“We are going around to the local communities as assisted with FEMA, Team Rubicon and the National Guard to provide this service and support the local emergency management community,” she said. “We started on Wednesday with the Las Vegas Paiute Tribal Clinic, and we will be in Pahrump on Friday and Saturday as well. After Pahrump, we will be heading up to Tonopah, Beatty, Goldfield, Round Mountain, and then we will be going to Lincoln County, and then back to Clark County. We will try to get as many shots in arms as possible for as long as we can.”