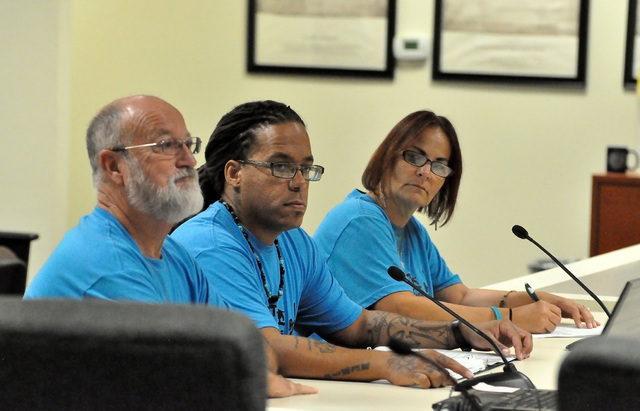 The upcoming Light in the Dark Pumpkin Fest at Ian Deutch Memorial Park has local officials on guard.

Before the kickoff of the festival in October, organizers will have to provide the county with signed waivers, coordinate with first responders on safety requirements and purchase a $1 million liability policy in the name of the town of Pahrump to secure the venue for the event.

Matt Luis, manager of buildings and grounds, said lighting at the event is a concern.

“My concern is, you’ve got to keep in mind, this is not a flat surface. I’m worried about the liability on the town, if there’s an accident with this type of lighting,” Luis said.

“They are doing everything they can to produce lighting, I just don’t know if it will cover us in the liability issue,” he said.

A portion of the proceeds from the event will be donated to an account allocated to install lights in the skate park located at Ian Deutch Memorial Park.

Pahrump Fire Chief Scott Lewis said he had talked to the event’s organizers about a number of safety concerns.

Instead of open flames, organizers will use battery-powered candles. Additionally, there’s an ongoing discussion regarding the use of propane at the event.

While the organizers expect approximately 200 participants and 1,000 spectators per day, they agreed to pay the Pahrump Valley Fire and Rescue to cover the event, Lewis said.

“There will need to be fire inspections done prior to the event opening, and then we discuss some general considerations regarding the skate board park, injuries, fights, things along those lines,” he said.

“We would need at least two people wandering through there,” Nye County Sheriff Sharon Wehrly said.

Maye said he anticipates “a large showing” at the skate park during the event.

“Every one of the participants for this particular event at the skate park will have to have a wrist band and a waiver signed. If they are under the age of 18, their accompanied guardian must sign a waiver. Otherwise, they will not have access to the skate park for this entire event. That is an effort to keep safety as a first and utmost priority,” Maye said.

The festival will take place on Oct.29 at the Ian Deutch Memorial Park located at 1600 Honeysuckle Street in Pahrump.

The event will be free of charge to the community.