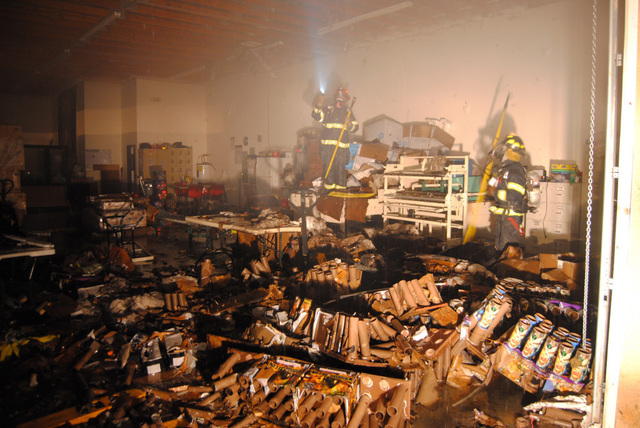 A local fireworks retailer is crediting crews from Pahrump Valley Fire and Rescue Services for preventing the spread of a warehouse fire that injured one person while destroying thousands of dollars worth of inventory.

Fire crews were dispatched to Area 51 Fireworks just after 11:30 p.m. on Friday after reports of smoke coming from a warehouse on the property along Highway 372.

Fire Chief Scott Lewis said he could see colorful smoke and fireworks discharging from a distance as they responded to the scene.

“As I was approaching the scene from Pahrump Valley Boulevard I had a good view of the back side of the structure and there was heavy smoke and visible fire showing so I knew we will be going to work,” he said. “When we arrived on scene we found that the sprinkler system in the warehouse had opened up and was discharging water.”

Lewis said the fact that the warehouse fire posed a threat to enveloping the actual retail store, an additional truck was summoned to the fire grounds, where a large dumpster on the property was also involved in fire.

“We brought in a second engine that established additional water supply and we created a line between the warehouse building in the retail store,” he said. “Their job is to make sure that the fire did not spread to the retail store. There was also a 30-yard dumpster that was also involved in fire. But the warehouse sprinkler system did a good job in containing that fire.”

Though the cause of the fire is still to be determined, investigators are looking at preparations for an annual fireworks demonstration that was scheduled for Saturday evening. Fireworks retailers regularly hold the demonstrations to showcase new products for high-end buyers.

Lewis said the initial investigation gave no indication that the fire was intentionally set.

“We conducted our investigation and the fire marshal will come out and have a second look but it appears that it was an accidental fire and there’s no evidence that it began from an open flame ignition,” he said. “We will also be reviewing surveillance video but overall one person was treated at the scene for smoke inhalation and there were no other injuries.”

Area 51 Fireworks Regional General Manager Casey Steinhart said he too is looking to determine how the fire started.

“Fireworks don’t just start by themselves, but something caused a spark and things caught on in one of the boxes of fireworks,” he said. “I’m just happy to say nobody got seriously hurt, the fire alarm and sprinklers worked. Scott Lewis and his crew did a great job.”

He also noted that the product demonstration went on without incident on Saturday night, as the building was re-opened on Saturday afternoon.