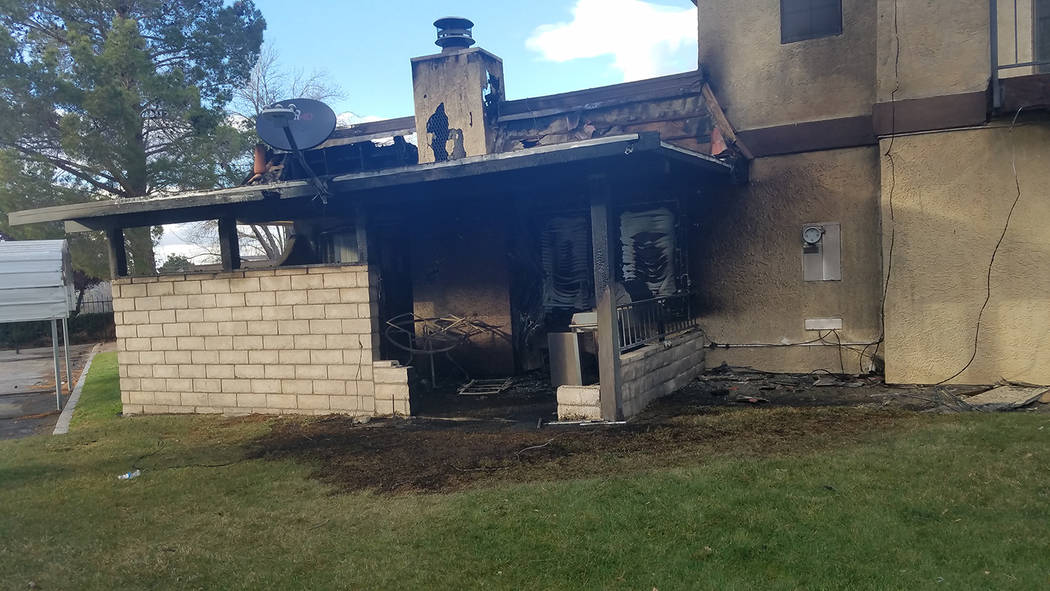 David Jacobs/Pahrump Valley Times A look the burned out apartment off Bourbon Street in Pahrump on March 31. No one was injured in the fire that remains under investigation. 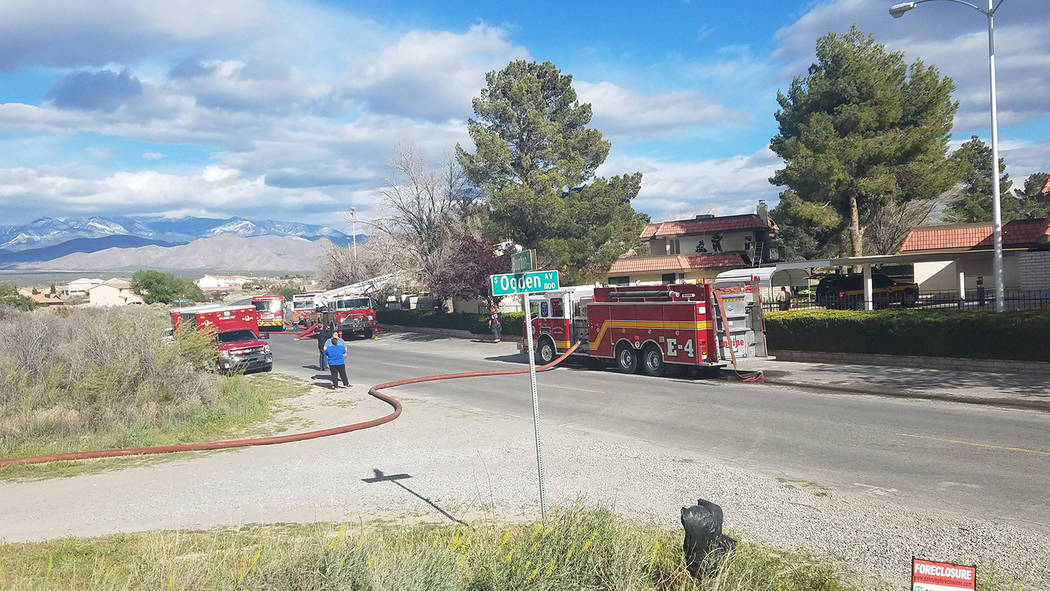 David Jacobs/Pahrump Valley Times Fire vehicles outside the apartment that burned off Bourbon Street in Pahrump on March 31. No one was injured in the fire that remains under investigation. 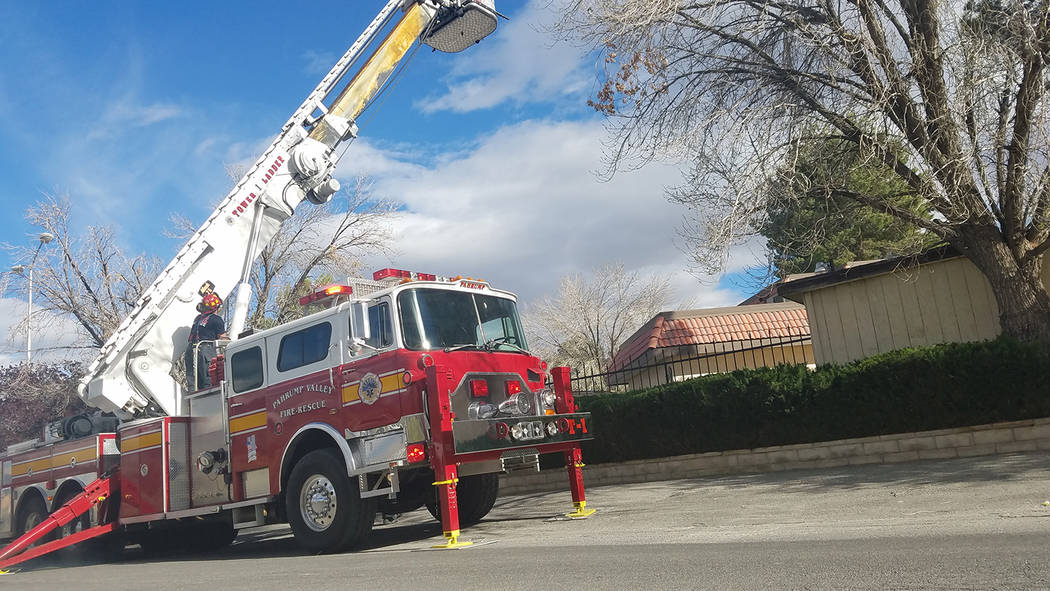 David Jacobs/Pahrump Valley Times Fire ladder truck at work outside the apartment that burned off Bourbon Street in Pahrump on March 31. No one was injured in the fire that remains under investigation. 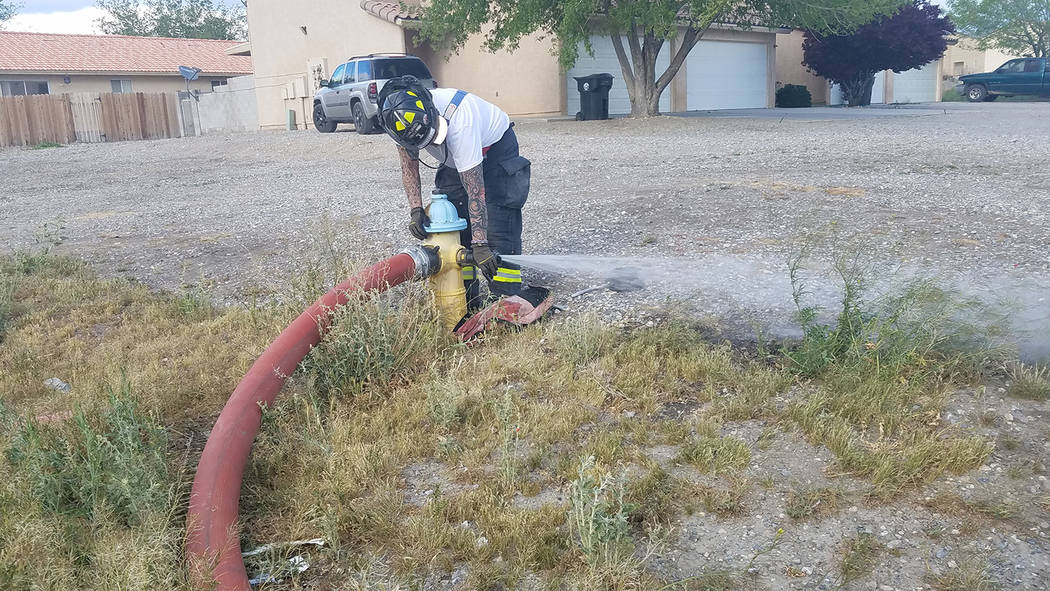 David Jacobs/Pahrump Valley Times A Pahrump Valley firefighter works on a fire hydrant along Bourbon Street. A fire burned an apartment there on March 31. No one was hurt in the fire.

Fire tore through a Pahrump apartment, forcing its residents from their residence as firefighters were called to extinguish the blaze.

No one was injured in the fire reported prior to 4 p.m. March 31 at 781 E. Bourbon St. in the Mount Charleston Golf Estates condominium/apartment complex.

The cause of the fire remains under investigation.

“It appears to be accidental in nature, possibly with the use of gasoline within the structure,” Chief Scott Lewis of Pahrump Valley Fire and Rescue said at the scene.

“We are investigating the area of the fireplace…” he said.

Amber Harrell, who was awaiting her daughter at a nearby school bus stop, called in to report the fire.

“A couple came running out, saying their apartment was on fire,” Harrell recalled. “That the fireplace went up, that the whole back patio was in flames. So I dialed 911. The fire department showed up shortly thereafter. I helped direct some traffic and told kids to move away.”

Harrell recalled seeing the smoke prior to firefighters’ arrival.

“I came around the back side,” she said. “My friend had went in through the gate to make sure another apartment was empty.”

“En route, we were notified that there was a well-developed fire at the rear of the apartment complex,” said Lewis, the fire chief.

Upon our arrival, crews found fire showing from the back side of the building.

The flames were extending from the first floor up to the second story.

“It was also well-developed in the roof surface in both the first and second story it was extending to,” Lewis said. “Crews did a quick knockdown on the exterior, moved to the interior, held it.”

He credited the Nye County Sheriff’s Office with doing an initial search for possible victims.

“They made sure that all of the individual suites within this particular building were evacuated as we arrived on location,” Lewis said. “Firefighters went through and confirmed that through primary and secondary searches.”

Path of the blaze

The fire was held to the initial point of origin with some minor extension to the exterior wall surfaces of adjoining space.

One apartment unit cannot be occupied but can be repaired, Lewis said.

“The inside of it is pretty much intact,” he said. “We held it because that interior crew, when they first went in, they made sure it didn’t get further into the structure.”

The fire resulted in electrical problems to the second apartment.

Lewis was asked about firefighting trucks gaining driving access to the complex through its driveways. Instead of using the driveways, the fire trucks staged on Bourbon Street behind a fence.

“It’s not just the parking structures (similar to carports}, but it’s a gated community,” Lewis said of the layout.

Firefighters, he said, made “simple adjustments” — keeping vehicles on the outside of a parameter fence.

“We moved them into positions that allowed us to still stretch the (fire) lines in,” Lewis said. “We also had our tower ladder in place over the second story.”

“We just had to stretch the lines in a different fashion,” he said. “We couldn’t get the engines as close, but once we stretched the lines from those positions, we didn’t have to add lines or anything like that.

“It’s something that will be addressed, absolutely,” Lewis said of the driveway access. “It has been addressed in the past. There’s just been no remedy for it.”