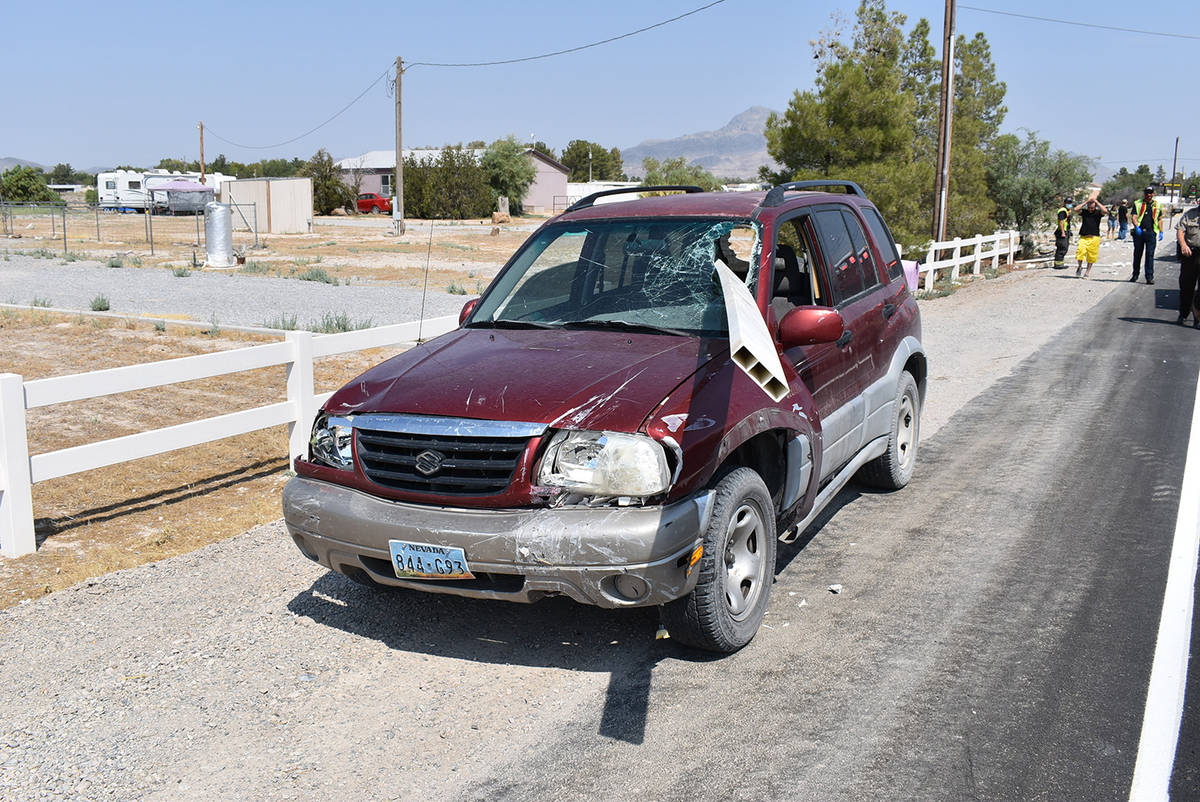 Special to the Pahrump Valley Times A driver was nearly impaled by a section of fencing after a collision along the 800 block of North Leslie Street on Sunday, Aug. 23, at approximately 11 a.m. No serious injuries were reported. 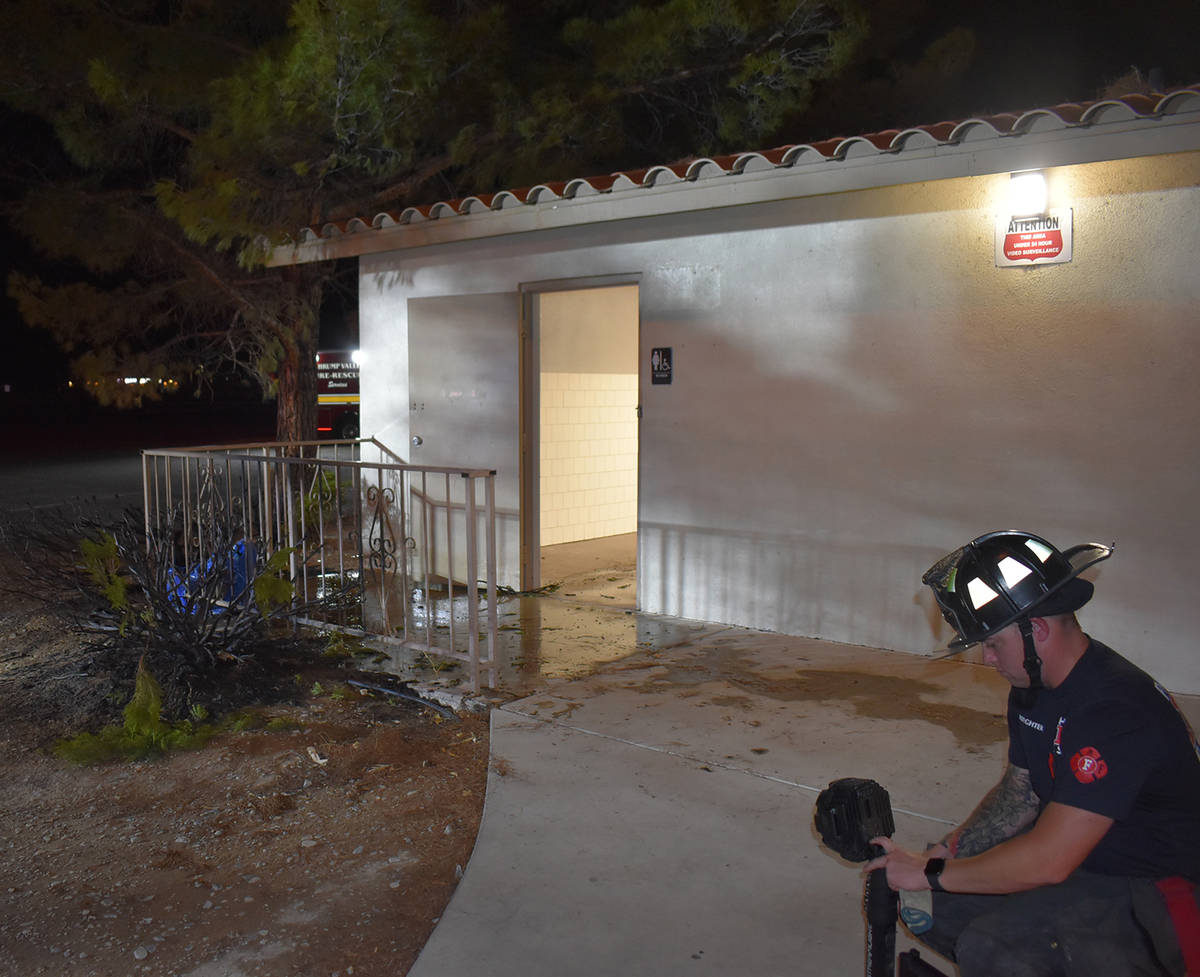 Special to the Pahrump Valley Times Fire crews extinguished a fire at the public restrooms directly across from the Bob Ruud Community Center on Tuesday, Aug. 18 at approximately 10 p.m. Fire Chief Scott Lewis said the cause of the fire is suspect in nature and is under investigation.

No injuries were reported following a structure fire along the 1100 block of East Comstock Circle.

“Crews arrived to find a manufactured dwelling with light smoke showing from the interior,” Lewis said. “The fire was found to be mostly extinguished in the interior bathroom. The investigation revealed a probable improper discarding of smoking materials that extended to a nearby trash receptacle and then up the wall. The fire was quickly controlled, as crews checked and found no additional extension and there were no injuries. The cause of the fire is accidental in nature.”

On Friday, Aug. 14 at approximately 1:53 a.m., fire crews were dispatched for a report of a structure fire along the 900 block of East Basin Avenue.

“Crews arrived to find an accessory outbuilding with fire showing from the interior,” Lewis said. “Crews made a quick interior attack and knocked down the main body of fire. The structure was mostly empty with the exception of some trash that had been intentionally ignited. The fire is under investigation.”

On Monday, Aug. 17, crews were dispatched for a report of a vehicle fire along the 1700 block of West Duck Street at approximately 10 p.m.

“Crews arrived to find the vehicle with fire showing in the rear of the truck, which had extended to the passenger compartment,” Lewis said. “Crews quickly extinguished the fire with no extension to the surrounding property. The investigation revealed that the cause of the fire is suspect in nature and is under investigation.”

On Tuesday, Aug. 18 at approximately 10 p.m., fire crews were dispatched to a reported structure fire in the area of Petrack Park across from the Bob Ruud Community Center.

“Crews arrived on location and found a fire on the rooftop of an accessory outbuilding used as public restrooms,” Lewis said. “The fire extended to nearby landscaping and crews quickly extinguished the fire without incident. The cause of the fire is intentional in nature and is under investigation. Crews are following up on all leads that have been developed. There were no injuries.”

On Sunday, Aug. 23, crews responded to a motor vehicle crash along the 800 block of North Leslie Street at approximately 11 a.m.

“Crews arrived to find a vehicle that went through a perimeter fence on a property,” Lewis said. “There was significant damage to the vehicle, however there was no entrapment and no significant injuries. It was a close call for the driver because a piece of the fencing went right through the windshield of the vehicle and just passed the area where the driver was occupying. Crews remained on location to further investigate the accident and eventually cleared the scene.”

On Tuesday, Aug. 25, fire crews were dispatched to a report of a brush fire in the desert area near Bowler Drive and Paula Drive at 5:42 a.m.

“Crews arrived and found that it was not a brush fire, but a vehicle fire that appeared to be intentionally ignited,” Lewis noted. “The fire was quickly extinguished with no further extension to the nearby ground cover. The cause of the fire is under investigation by Pahrump Valley Fire and Rescue Services, the Bureau of Land Management, and also the Nye County Sheriff’s Office.”

Lewis also spoke about the arrest of an individual regarding several fires ignited in the area of the Family Dollar Store on Dahlia Street, from August 16th through the 18th.

“There are homeless encampments in that area and a suspect was arrested in relation to those fires and taken into custody by the sheriff’s office,” Lewis said. “The investigation continued with Pahrump Valley Fire and Rescue Services and the Nye County Sheriff’s Office.”