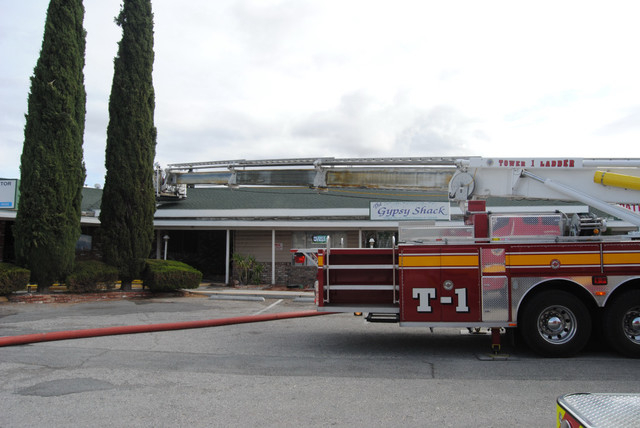 The incident occurred at the offices of Floyd’s Construction at 1201 S. Highway 160.

The call came after a Nye County Sheriff’s deputy in the area spotted smoke emanating from the roof of the complex, which encompasses several other businesses.

“Upon arrival with Engine 1, crews further observed the smoke conditions and began stretching attack lines to engage the fire,” he said. “They also laid in from a hydrant to establish water supply. They also brought the tower ladder and conducted roof operations with the engine supplying the tower ladder.”

Lewis said crews noticed the fire slowing advancing in the attic space between the ceiling and roof of the structure.

It was under control in under an hour.

“Fire crews made good progress and protected the property within the structure by throwing down salvage covers and pulling the ceiling to access the fire from the underside,” he said. “Crews that were in the tower ladder punched holes in the roof and accessed the fire and also controlled it there. It did not get into any of the adjoining suites.”

The initial investigation revealed the fire originated in the area of the office’s HVAC system along the roof line.

It did not appear to be suspicious in nature.

“We believe it to be a failure of the equipment,” he said. “The materials inside were mostly protected but there was a little water damage and maybe some light smoke, but for the most part, most of the damage was contained to the structural members up in the roof area. Fire crews did a good job.”

Roughly four hours later, fire crews were dispatched for a report of an incident where the driver of a car somehow fractured their arm while behind the wheel of the vehicle.

“It is my understanding that a canine may have jumped from the vehicle, which subsequently broke the driver’s arm,” Lewis said. “They transported themselves directly to Desert View Hospital in their own personal vehicle. We don’t know exactly what happened but it’s my understanding that the dog jumped out the window and the leash may have become tangled as it was attached to the operator’s arm at which time the arm was broken.”

Last week crews were summoned to the area of West Shadow Mountain for a report of a brush fire just after 8:30 p.m.

“Upon arrival, we found smoke showing from a previous controlled burn, which was left unattended and the materials begin to re-ignite,” Lewis said. “Fire crews extinguished that without incident or extensions.”

Additionally, Lewis wanted to remind residents never to leaving a controlled burn unattended even for a few moments.

He also noted the department is witnessing residents burning outside the scope of the burn ordinance, while others are not acquiring burn permits.

“Some are trying to burn at night and we recently had an elderly gentleman who was suffering from Alzheimer’s who decided to start a series of burns on the outside of his property where he was burning around himself,” he said. “We’ve been seeing lots of challenges and we want to make sure everybody stays safe, as well as their properties. We will be enacting the burn ban probably within the next 30 days.”