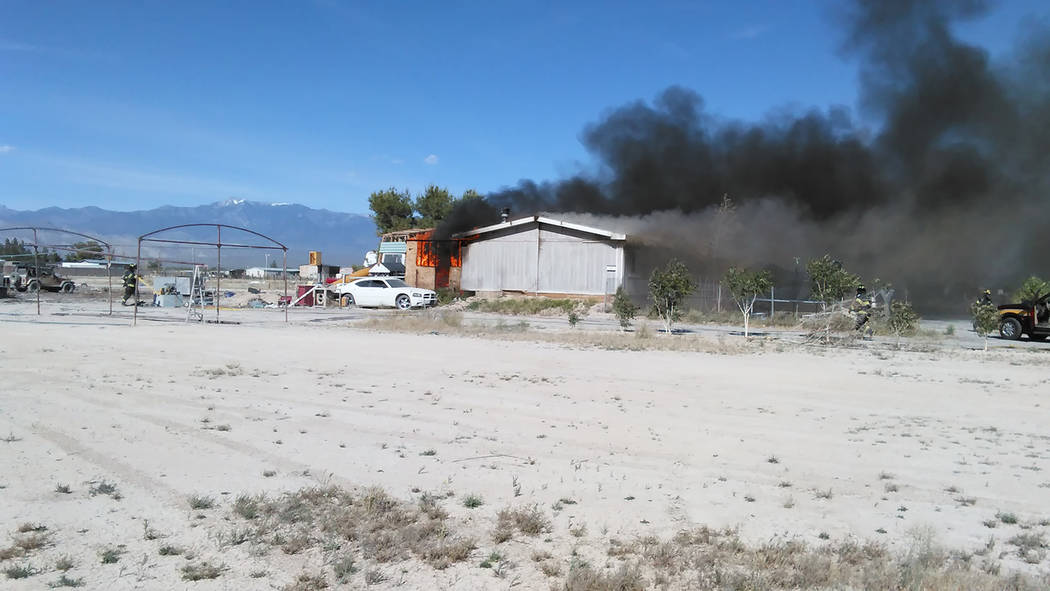 Pahrump Valley Fire and Rescue crews were dispatched to the residence on the 3100 block of Wall Street on the valley’s south end, just before 4 p.m.

The exact cause of the blaze is under investigation.

“While we were responding, we were notified that the structure was well involved at the rear of the property and also had extended to a closely placed vehicle,” he said. “The fire was also traveling to the underside of the double-wide manufactured dwelling as well as up into the attic space. The winds were taking it along to other closely parked vehicles and an abundance of personal property stored at the rear of the house.”

Lewis said fire crews started a quick knockdown on the backside of the structure while commencing an interior attack through the front door, however, the deteriorating conditions inside warranted crews to pull back and perform a defensive exterior attack.

“They started a fire attack on the interior but with those conditions with the floor collapsing and the ceiling coming down, it warranted them to pull back. All occupants were accounted for and all of the animals in the home were removed. There were no injuries and the firefighters did a great job, they went in there and started doing their primary search of the residence.”

As crews were working that fire, Lewis said, dispatchers received several back-to-back emergency calls within minutes of each other, but the department adeptly handled the emergencies.

“We received additional calls for service, including a motorcycle accident and a medical transport,” he said. “That seems to be the thing for us sometimes. When we’re managing a large-scale incident, we have subsequent instances occurring throughout the valley and we still managed it, there was no cessation in service.”

It took crews several hours to completely extinguish the fire.

Lewis said additional resources were called in to assist in the effort.

“That is management of our resources and we exercised our mutual aid agreement by bringing in an additional engine company to assist with hand line movements and other functions,” he said.

“The fire was placed under control in about an hour after our arrival, however, due to the fact that there was an overabundance of personal property stored around the residence, it took us a good several hours to get that fire totally extinguished to the point where we felt it was comfortable for us to start releasing the resources on scene,” Lewis said.