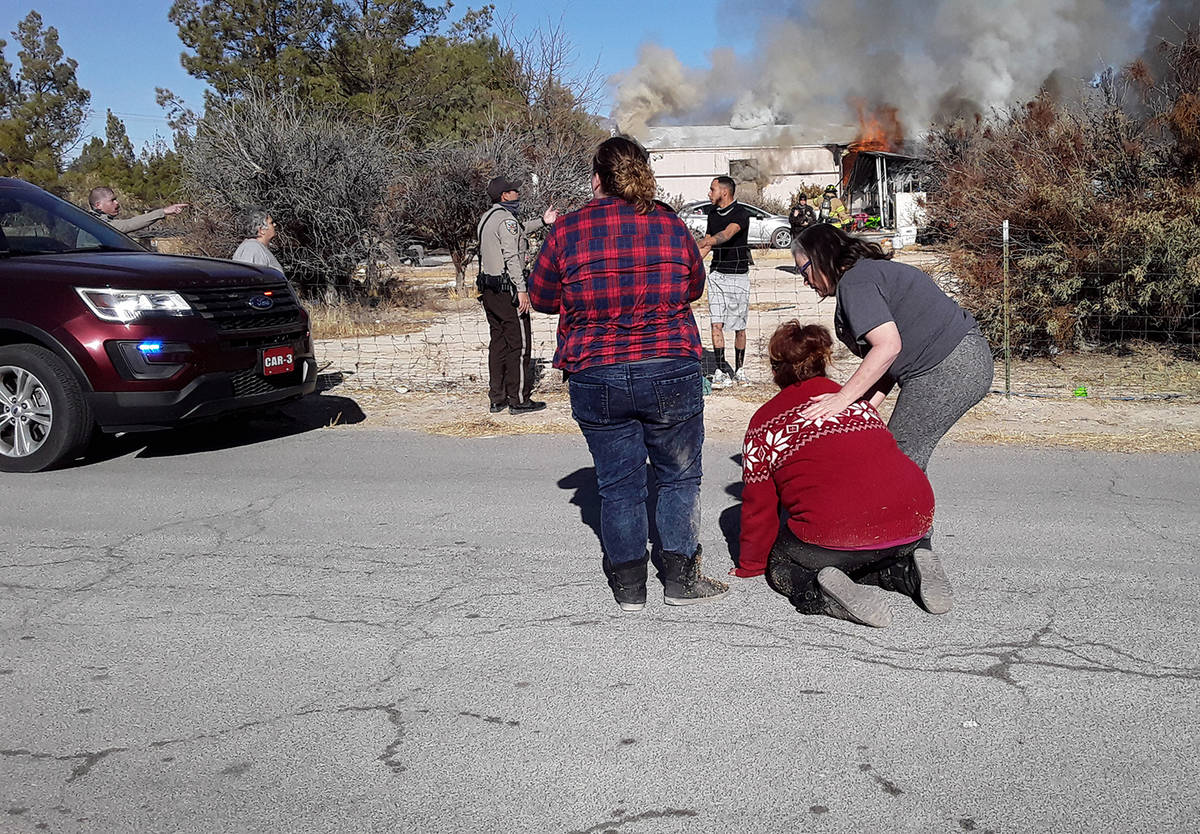 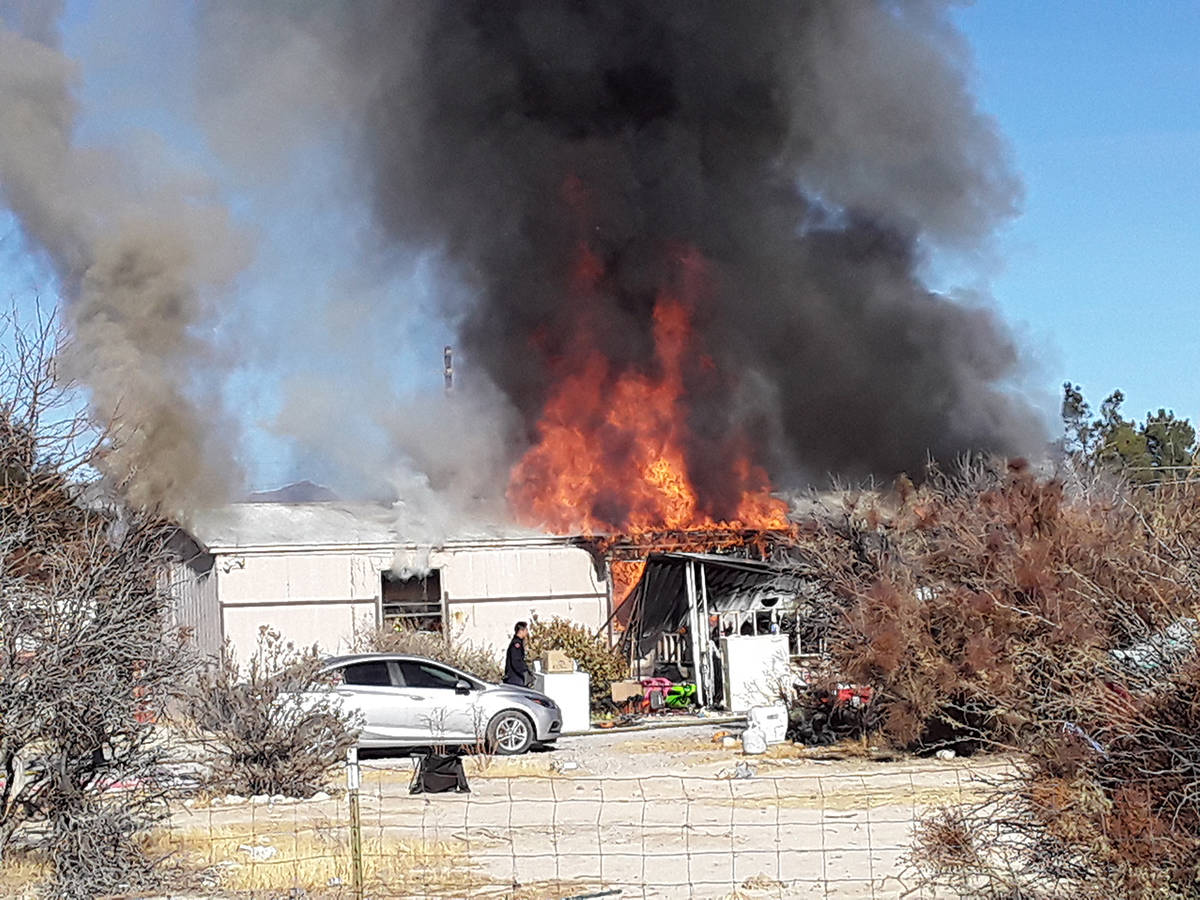 Selwyn Harris/Pahrump Valley Times Along with Hewitt-Burton, seven family members lived at the residence where numerous personal belongings, family keepsakes and Christmas gifts were lost in the inferno. The family is now looking for another place to call home. 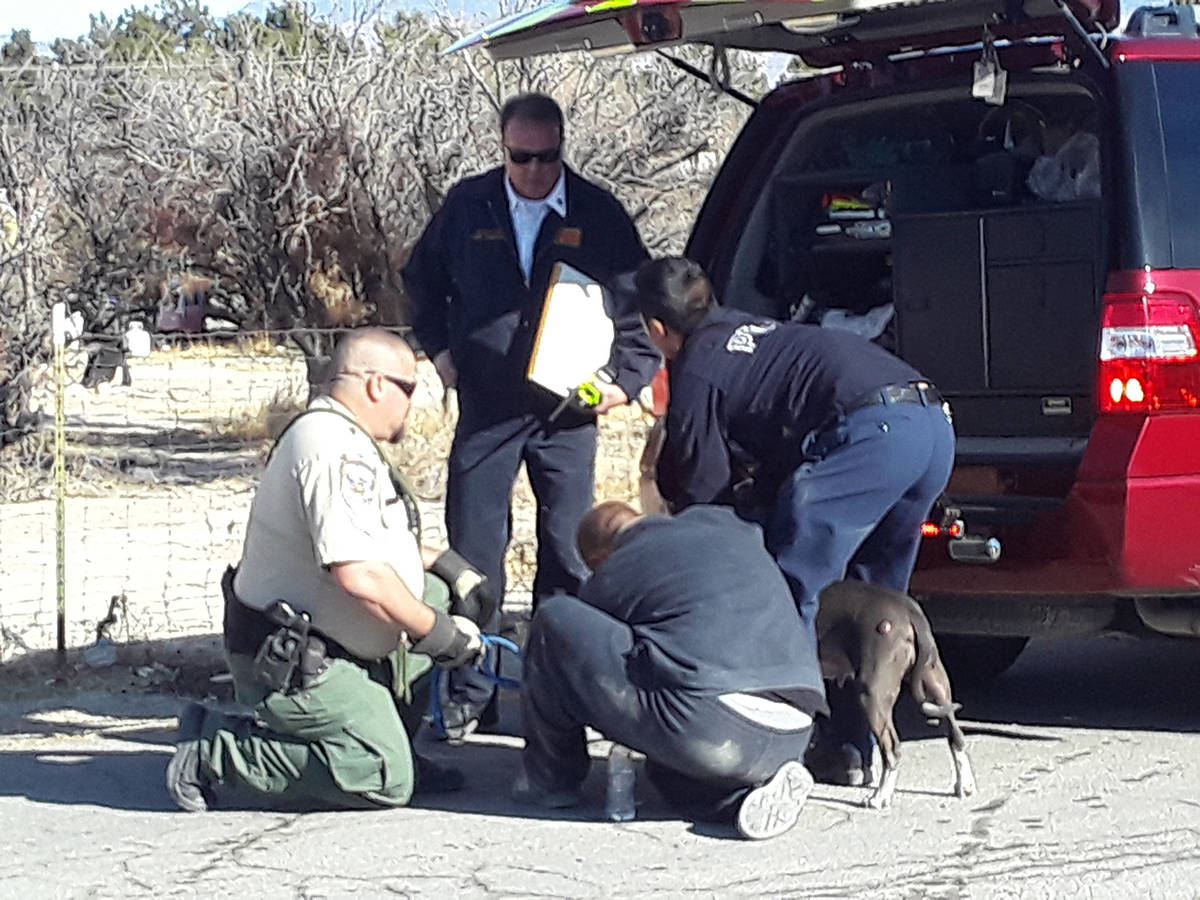 The Pahrump woman whose home was destroyed by fire on Tuesday, Dec. 15th spoke to the Pahrump Valley Times this week.

Amy Hewitt-Burton and her six family members managed to escape with their lives, but sadly, several of the family’s pets perished in the fire on the 1400 block of Windsong Lane, where the fire started just before 10 a.m.

“I have seven family members who lived there,” Hewitt-Burton said. “My mom is a senior, I am in my 40’s and my husband is in his 30’s. I have a 17-year-old, an 18-year-old, and twin 11-year-old girls. My home was totally destroyed. I have been in Pahrump for 22 years. My husband was born and raised here, but he’s been out of work for three months now, and I stay at home with the kids.”

At present, Hewitt-Burton said she is now living in a travel trailer on the property, but only temporarily.

Hewitt-Burton also spoke about the assistance that she is receiving in the wake of the tragedy.

“Thankfully, we are alive and we have a huge support system, and everyone has been so kind,” she noted. “The Red Cross helped me out financially, and they said that a social worker will get in contact with me, but I haven’t talked to anyone yet, so I don’t know. I called some hotels and one said that it would be like $99 a night, and the other said about $500 for two nights for all of us. This was here in town. I’m going to need a house or something. I just don’t know. My son lives in a two-bedroom single-wide in Comstock Park and we can go there, but it’s only two bedrooms.”

To add to the family’s misfortune and tragedy, Hewitt-Burton said most of the Christmas gifts she recently purchased were lost in the fire, as well as family keepsakes.

“Three or four things survived,” she said. “I’ve got bouncy shoes from Walmart and those all survived. I also still have some perfumes that I bought for my daughter that survived. A couple of things survived, but everything else is gone. I did find pictures of all of my kids and I found pictures of my grandpa, who has been gone for years.”

Regarding the exact cause of the fire, Hewitt-Burton said she was told it may have been an electrical malfunction in the home.

“The fire department told me that it looked like it was faulty wires from an extension cord plugged into the back of the house and that’s what the fire chief told me,” she said. “I am still waiting to get the physical report. About three days before this happened, I called an electrician because our lights were flickering in the house, and the electrician said he couldn’t find anything so he left, and about three days later, my house was gone.”

Shortly after the fire began consuming the home, at least two explosions were heard throughout the neighborhood, Hewitt-Burton said.

“They were the barbecue tanks that we know of, but they could have been oxygen tanks because my mom uses oxygen when she needs to,” she noted. “So it could have been an oxygen tank, or the propane tank. I won’t know completely until I pick up the report.”

Additionally, Hewitt-Burton dispelled several rumors posted on social media regarding an individual who may have played a role in the origin of the fire.

“They were talking about one of my son’s best friends and I have known the kid since he was 9-years-old, and I was just trying to help him out,” she said. “I would feed him and he would stay here if he needed to, but mostly he was here for me to feed him and stuff. Absolutely, under no circumstances would he ever put my home in jeopardy. He calls me mom and he loves me to death and I don’t believe what’s being posted on social media.”

Hoping for the best

In regard to finding a suitable place to call home, Hewitt-Burton said she’s receptive to any kind of assistance for her and her family.

“If someone wants to sell me a trailer or know of anyone who has a place for rent, I would be very grateful,” she said. “My main concern right now, is getting my kids in another house. I’m not so worried about clothes or food. I will make sure that they eat, and have clean clothes. We have already had a lot of clothes donated. Christmas presents would be amazing. Christmas is important, but in the grand scheme of things, it’s not really the most important thing right now.”

An additional concern Hewitt-Burton said was locating the pets that managed to escape and survive the fire.

“Right now, out of four dogs and five cats, I have one dog and one cat,” she said. “I had a rabbit that got pulled out and two rats that got pulled out. I also just want to tell the community thank you and I have had a large outpouring of love coming from so many different people in the community. The Nye County School District and everyone who I know have come and helped sift through the ashes. They also messaged me well wishes. I just want to tell the community and my friends, and everybody that I love them and thank you for all of their help and support.”

Those who wish to assist the family with provisions, can drop them off at the Pahrump Senior Center, at 1370 W. Basin Ave., between 9 a.m. and 2 p.m.