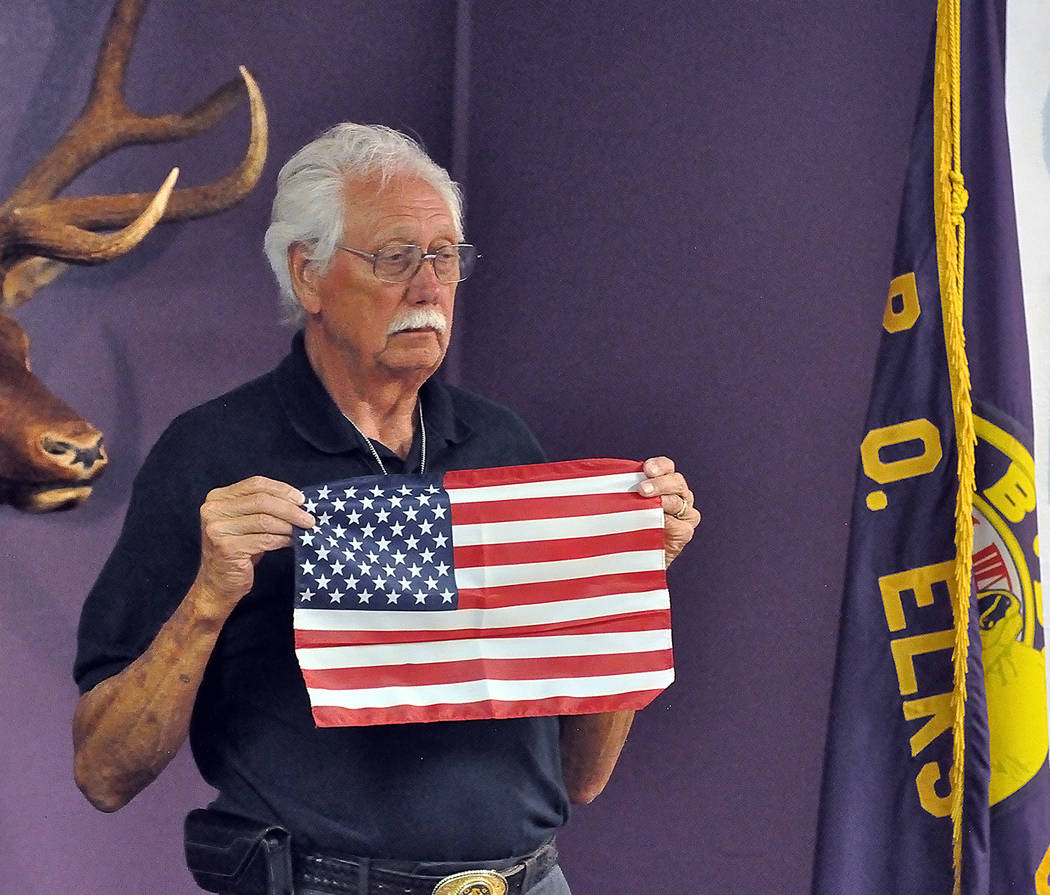 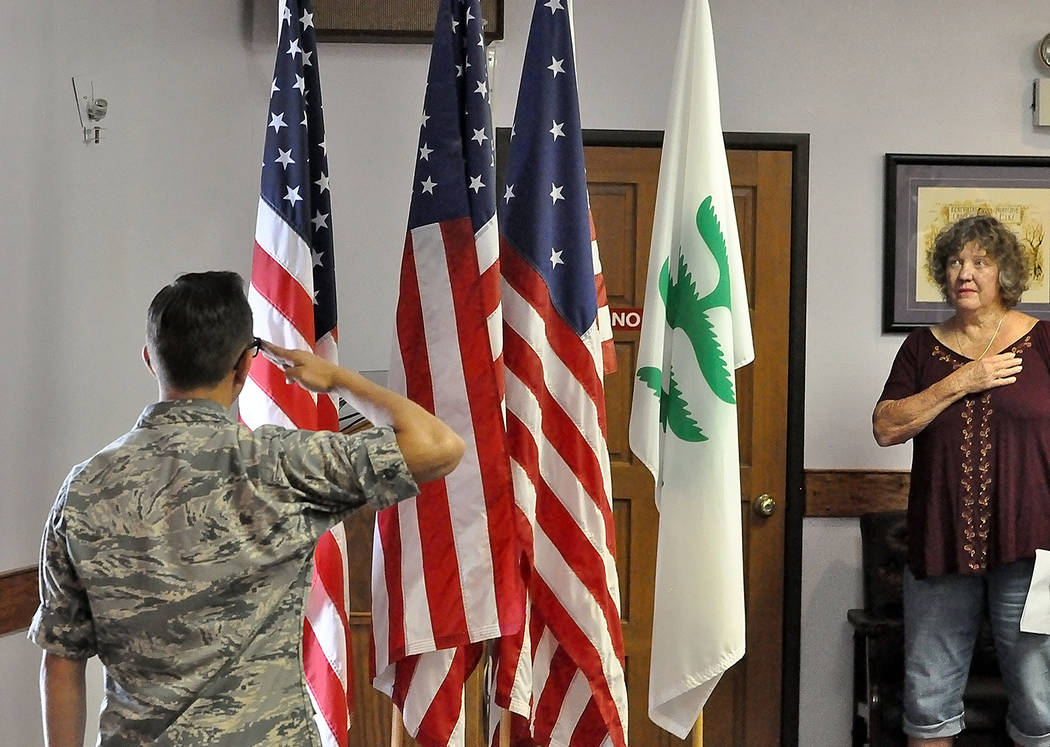 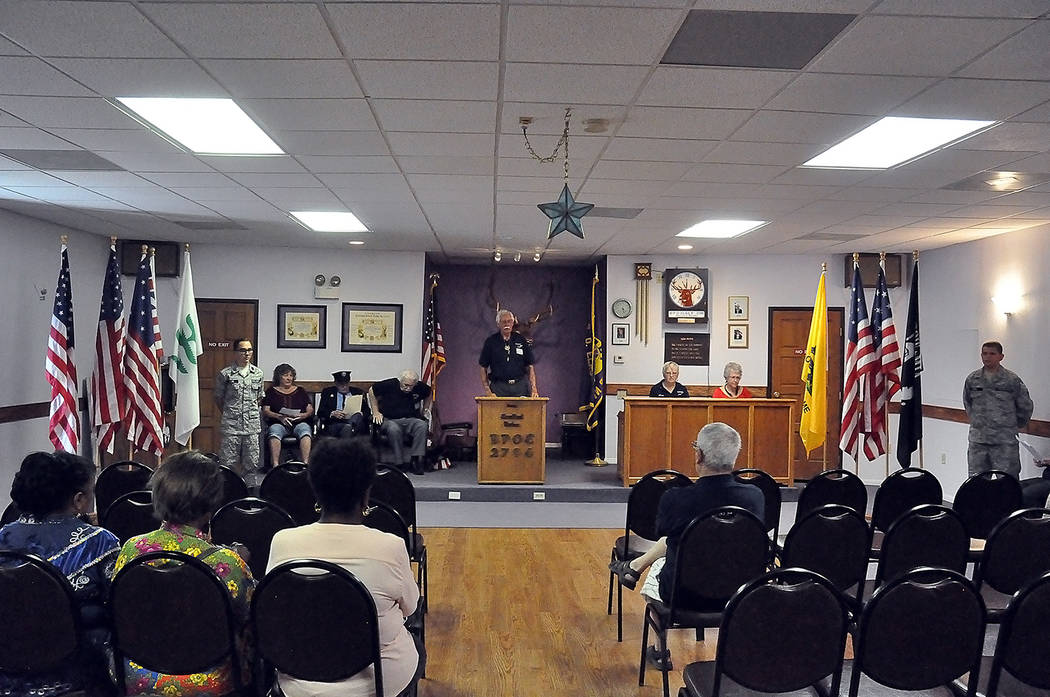 Unyielding and steadfast patriotism was on display during a special Flag Day ceremony at the Pahrump Elks Lodge.

The Friday, June 15 event featured musical arrangements along with what’s best described as a history lesson on the “Star-Spangled Banner.”

Elks Exalted Ruler Chuck Coleman spoke about the significance of the American flag from the founding of Jamestown, Virginia in 1607 until 1775, where the flag of England was known as the flag of the peoples of America.

Coleman also articulated how the design of the American flag has evolved over time.

“The original 13 stars and stripes represented the original 13 colonies,” he said. “In 1795, two additional stars and stripes were added to represent admission to the union of Vermont and Kentucky. Under this banner of 15 stars and stripes, was fought the War of 1812. It was the sight of it flying over Fort McHenry on September 14, 1814, that inspired Francis Scott Key to write what was to become our national anthem, the ‘Star-Spangled Banner.’”

During the hour-long program, two members from Pahrump’s Civil Air Patrol took turns posting all of the flags throughout the nation’s history as Coleman spoke.

The last flag posted was the current American symbol adorned with 50 stars, representing each state in the union.

“On July 4, 1959, a star was added for Alaska, our first non-connected state, and a year later Hawaii, our island state, added a 50th star,” he noted. “Our present flag with 50 stars and 13 stripes, is accompanied by the POW-MIA flag to recognize the plight and demise of a special group of our armed services, those who were prisoners of war, or still remain missing in action.”

Though Coleman was pleased with the overall ceremony, he expressed a bit of disappointment over low attendance at the event.

At present, more than 360 are members of the Pahrump Elks lodge, but just a handful were present for the annual event.

“Part of this ceremony was a history lesson about the American flag, and I think it was a shame that more people were not here for this ceremony,” he said. “The young men from the Civil Air Patrol did a wonderful job in posting up all of the flags that were on display here.”

Additionally, Coleman explained why the ceremony was held on Friday, June 15, rather than June 14, which is the official designation of Flag Day.

“In order to change the day of the observance, we had to get permission from the District Deputy Grand Exalted Ruler in Mesquite,” he said. “We have dinners here every Friday, so we wanted to do the flag ceremony in conjunction with our Friday night dinner.”

Musical numbers such as “God Bless America” and the “Star-Spangled Banner” were also sung by lodge members and others in attendance.