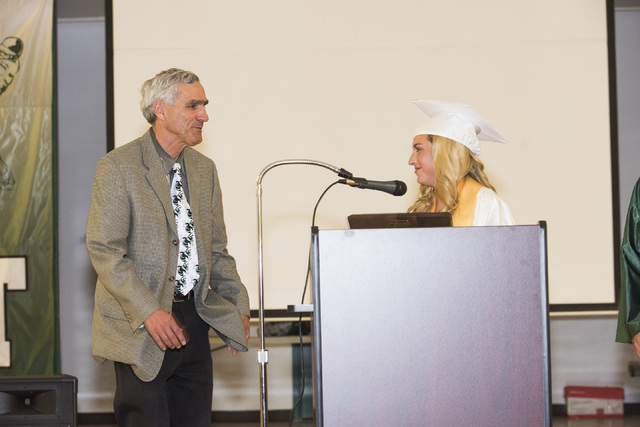 BEATTY — There was a flood of emotions during the high school’s graduation ceremony on Monday, some for the students who were leaving, others for the top administrator who is returning home.

“I will always be a Beatty Hornet,” said Beatty High School Principal Gary Flood, who is leaving after six years in Beatty. He previously spent two years in Tonopah.

Flood is not retiring, but will be taking a position at Naselle Youth Camp in southwestern Washington state, which he says is similar to the Spring Mountain youth rehabilitation facility in Las Vegas.

The decision to make the move was not an easy one, says Flood, despite the fact that it will enable him to live at home with his wife, Cindy.

“I thought my life was weird when I left home eight years ago, but it’s even more weird to leave here,” he said. “That’s how wonderfully people have treated me here.”

Flood said Beatty “is the best staff and the best students I’ve worked with in my whole career. I’ve had a sick feeling in my stomach for weeks now to leave these people, especially the students.

“This is the best group of kids I’ve ever worked with. It’s a compliment to them. It has been wonderful for me.”

Flood says he is “already committed” to returning for visits and to staying in touch.

Describing his departure as “gut-wrenching and heartwarming,” the principal says he looks forward to living with his wife, who he says is the “busiest person I know.” She operates a small farm and a vacation rental, raises German Shepherd puppies, and is active in a community theater group.

In her valedictory address, Maggie Cathcart said she didn’t think Flood had a mean bone in his body and that he never said anything bad about anyone. She thanked him for his positive outlook on life.

Cathcart said she would encounter Flood in the hall at school and tell him about something bad that had happened, and that he would invariably say, “Hmmm….but on the bright side….”

Flood’s departure also marks another big change for Beatty schools. The plan for next year is for Amargosa School Principal Rob Williams to be principal of all the schools in Beatty and Amargosa with former Tonopah High School principal Alvin Eiseman as assistant in Beatty.