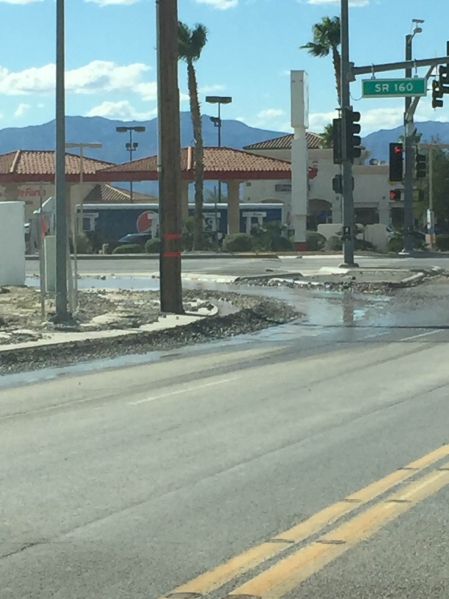 After Pahrump and surrounding areas in Nye County saw a string of drenching storms in late October, the cleanup of those downpours continues.

Nye County Public Works started almost immediately as the rains fell, working around the clock for the first few days of cleanup.

With most of the major areas of concern already addressed, public works is patching up areas of road that were left less-than-desirable, which will take some time to complete.

“We still have another six to eight weeks of flood repair,” said Tim Carlo, Nye County Road Superintendent. “It ranges from extensive, like Gamebird to the south, all the way to Crystal and Amargosa Valley that were all washed out.

“So we’re doing shoulder repair where it’s washed out, we’re filling it in and grading them back and sweeping roads.”

Public works has a plan of action anytime a rain event causes road damage, which addresses the worst-hit areas first.

“We usually start Rainbow Avenue or the Winery Road area,” Carlo said. “We have crews all the way across Rainbow Avenue to Fort Churchill Road, the winery area, industrial area, up behind the Terrible’s gas station; all through there.”

Compared to big storms in the past, the ones the county saw last month were not as bad, but were bad enough to cause months’ worth of cleanup work.

“Ones in the past were a lot worse,” Carlo said.

Barring any further weather events, mixed with the holidays, all work should be completed by the end of January.

With the increased workload the rain damaged roads result in, other planned road work projects are put on the back burner.

“It slows them down as always,” Carlo said. “We got to take off for the emergencies and then get back to the regular road projects when we can.”