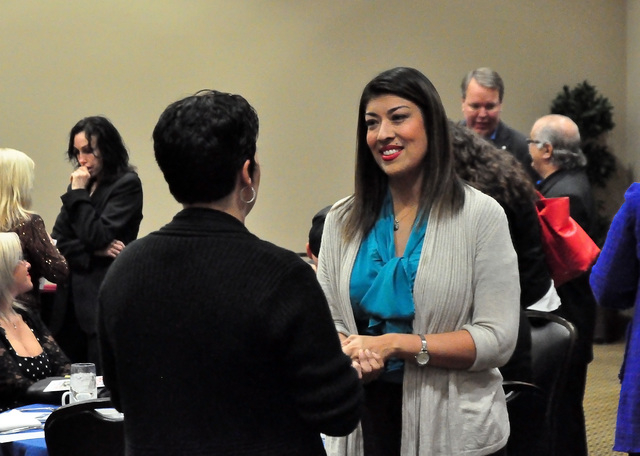 Lucy Flores said she is the most progressive candidate running to challenge incumbent Republican Cresent Hardy for the 4th Congressional District.

Former state Assemblywoman Flores made Social Security, education and health care for all some of the pivotal points of her campaign.

She stopped at the Pahrump Nugget last week for the annual Roosevelt-Kennedy dinner, where she told the audience about her agenda.

In her address to Nye County Democrats, Flores said she was the most progressive candidate and touted her endorsement from Democratic presidential candidate Bernie Sanders. She was also endorsed by several progressive organizations including Democracy for America.

“I have worked my entire life, I have worked so hard. And I am the person who is going to work the hardest for you, because your issues matter to me, they are personal to me,” she said at the event.

Flores’ top rivals are Las Vegas philanthropist Susie Lee and state Sen. Ruben Kihuen. She said the differences between her and her opponents are “very distinct.”

“I do draw a stark contrast between me and my opponents both in my record and what I stand for, my progressive agenda compared to their frankly more conservative agenda,” she said.

Flores talked to the Pahrump Valley Times about some of the issues in rural parts of the 4th Congressional District. She answered questions about the BLM, rural infrastructure and Yucca Mountain.

She said turning over all of the federally-controlled land to the state of Nevada isn’t “reasonable.”

“It is far more expensive, we do not have the budget to take over federal lands throughout Nevada,” Flores said.

“Ultimately, I think that the negatives outweigh the benefits when it comes to Yucca Mountain,” she said.

“There are a number of different things that we can keep doing to focus on economic development in a way that makes sense for Pahrump. And I do think that it is very necessary and that it should be a top priority for whoever wants to represent this district in Congress,” she said.

Flores said she wants not only protect Social Security but also expand it.

“I’m the only candidate who’s been talking about health care for all and universal health care for everyone. Health care as a right in this country and not just for those who can afford it,” she said.

If elected, Flores said she will prioritize the economy.

“And then everything else is an offshoot,” she said.

She also said she wants to remain focused on education.

“Making sure that our young people in Pahrump have the exact same access to not only high quality K-12 education, but also access to higher ed and not being burdened with many thousands of dollars in student loans. I think it’s critical for us,” she said.

She said about health care: “Health care shouldn’t be something that only the wealthy can afford.”

Expanding Social Security would be important for a place like Pahrump where many retired people live “check to check,” Flores said.

“I think that’s important for the people of Pahrump to have someone who’s willing to put themselves out there in an aggressive way to get them the benefits that they have earned,” she said.

Flores will face off with Kihuen, Lee and five other Democratic candidates in the June 14 primaries. The winner is expected to go against Hardy in November.