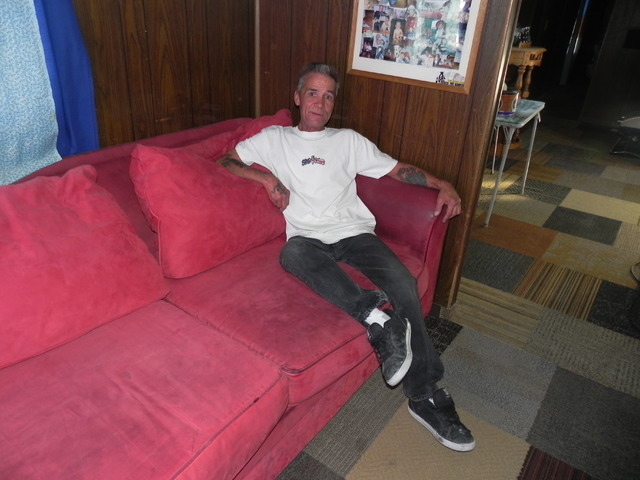 Mark Koehler is someone who can be thankful this Thanksgiving for having a roof over his head in a trailer in the Nevada West subdivision, thanks to a new state program.

Until last June, his home for the last seven years was a broken-down van in the desert behind the Pahrump Nugget Hotel and Casino. He is a recipient of a program that pays rent for the chronic homeless, which began as a pilot program operated through the Nevada Outreach Training Organization, formerly known as No To Abuse, but was so successful, it is now a permanent program.

“Every day I wake up and am able to turn on a light, flush the toilet,” Koehler said.

There are other formerly homeless housed in the trailer park. Their rent checks are paid to the landlord directly by the Nevada Rural Housing Authority. But the homeless people have to provide identification to qualify, which is sometimes difficult, but Nevada Outreach tries to help.

“My only holdup was I didn’t have a birth certificate so they sent for one for me,” he said. “I had a driver’s license and Social Security card but they didn’t accept it.”

Richard Fenton, with Helping Hands for Jesus, found some of the homeless and referred them to the program. Others found out through word of mouth where the homeless congregate, in places like Petrack Park.

Koehler lived in a van that didn’t drive any more after he twisted the frame. A painter, Koehler moved to Pahrump because work was slow in Las Vegas and his wife wanted to live by her family. Things deteriorated further, with alcoholism and family problems. But the fact he has a home helped him deal better with his other problems.

“I’m an alcoholic. I haven’t had a drink for over a month. I decided my kids are more important, they’re right where I’m getting to see them, get to talk to them. They’re a lot more important than getting a drink,” Koehler said.

“We’ve been trying to get housing for the chronic homeless for several years,” Fenton said. “Just recently last year the Nevada Rural Housing Association stepped in and decided to give us 15 vouchers for the chronic homeless here in southern Nye County, Pahrump they also gave us 15 vouchers for homeless veterans. But we were dealing with the homeless that weren’t veterans that were living out in the desert.”

The Nevada Outreach Training Organization decided to take on the project from Fenton’s homeless ministry and help the homeless get their identification to qualify, which most of them didn’t have, Fenton said. It may have taken two months to process the applications, but after the applications were processed, the first 15 vouchers were quickly used up. The organization forwards the applications to Carson City which investigates things such as whether they have a power bill registered in their name or an out-of-state address.

“Originally when it started in April it was a pilot program,” said Robyn Shope, a domestic violence program manager at Nevada Outreach Training Organization. “It was strictly to prove that there was a need and that’s what we did, we proved there was a need. We started with actually five that got immediately placed and now it’s up to 33.”

Three months after that, last June, the training organization was informed it would be a permanent homeless housing program with the highest turnout for such a program among the rural counties.

“Once the pilot was completed they took those numbers and ran them,” Shope said. “Actually we were the highest for placement. That was in May. So since May we have been placing them based on a new format. It’s not only moved to the chronic homeless it’s moved to the chronic mentally challenged. So we’ve been getting a lot of referrals from mental health because they don’t have places to place them either.”

The training organization’s program manager Anabel Lucero said word of the program brought people in off the streets.

“People were tired of being outside, they wanted a warm shower, they wanted a good night’s sleep, they started coming out of the woodwork,” Lucero said.

Shope said some of the applicants were leery about the organization’s motivations, but inquires have increased with the cold weather.

“When word of mouth got around that was the strongest thing that ever happened,” Shope said. “When we first started placing people and these people were talking to others it became a rolling snowball.”

The Community Crisis Intervention Committee was formed two years ago to try to help the homeless population, Fenton said, when there were no vouchers from Nevada Rural Housing Authority. Fenton submitted plans for a homeless shelter a few years ago, Pahrump has never had one, but local leaders dislike the idea.

“We were putting gas in their cars to stay warm, we were putting in gas to move (them) from one section to another,” Lucero said. “They were living in their cars. There were people who needed $10 for their gas tank for mobile homes for propane.”

Shope said the chronic homeless have two years of vouchers to prove they can be independent, but housing isn’t taken away from them. Nevada Outreach Training Organization helps the homeless on the program try to live an independent lifestyle through drug and alcohol counseling, finance counseling, as well as deal with issues like child abuse.

Fenton said the homeless need everything for the apartments which are unfurnished, but the Community Crisis Intervention Center collects donations for furniture, appliances and other furnishings the homeless can pick up.

“When people come through and need a place we can help them start here so they don’t start out with a sleeping bag in the middle of a cold trailer with nothing,” he said.

Koehler helped spread the news about the program. Fenton thinks it’s making a dent in the Pahrump homeless population but Koehler said many still don’t want to apply.

“The ones that actually self-applied actually got into a place because there are some homeless out there who already knew about it and alls they got to do is get down there and go through the red tape,” Koehler said. “I don’t like being cold, I hate being cold, I got all my winter stuff.”

Fenton said he can see the results in Koehler already, who used to spend his time drinking.

“In years that I knew him he struggled with alcohol, he had no hopes whatsoever,” Fenton said. “Every time he tried to get something done in life, something happened.”

Fenton said when Koehler received the voucher, something seemed to change in the man.

“I saw his eyes change from desperate, destitute, to no hope to actually having a little hope in his eyes,” Fenton said. “I saw the sparkle come back. Then he took advantage of that voucher and he applied himself to get on the list and then now that he has this home that was through the program, he has stopped drinking and reunited with his children.”

The $635 per month rent paid for the apartment includes the power and cable. Koehler said his disability would cover it but only leave him with $100 for the month.

“As it is they already cut my food stamps down to 18 bucks,” he said.

Koehler will apply to re-certify for the two-year program in June, then he wants to move back to Las Vegas. Meanwhile he hopes his son will join him for Thanksgiving.