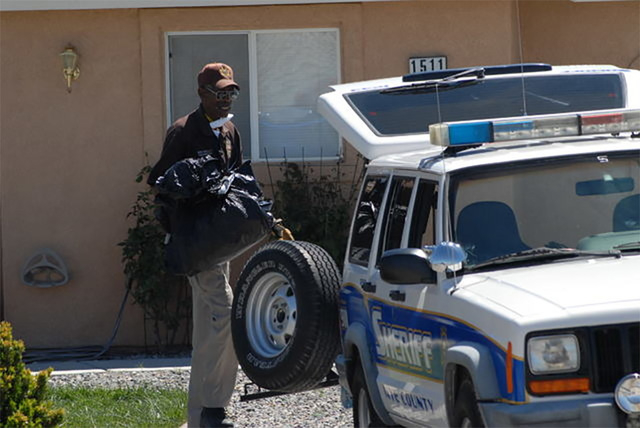 A former sheriff’s office volunteer has filed a federal lawsuit against the county, the former sheriff, and individual officers for his arrest for removing campaign signs two years ago.

Benjamin Gulley, who was never charged, filed the 18-page lawsuit in Las Vegas on April 14, claiming wrongful arrest, false imprisonment, and excessive force, along with other causes of action in violation of his Fourth Amendment rights. He is seeking damages in excess of $75,000.

The lawsuit stems from Gulley’s arrest April 22, 2014 with then Assistant Sheriff Rick Marshall for allegedly stealing campaign signs. Marshall, who at the time was campaigning unsuccessfully for sheriff, submitted to a misdemeanor charge of injury to property, was fined $500 and performed 40 hours of community service. The case was then dismissed upon completion of the service.

Gulley and Marshall were initially charged by police with conspiracy to commit a crime and possession of stolen property, however, then-District Attorney Brian Kunzi declined to pursue formal charges against Gulley.

The signs, which read “Anybody but Rick Marshall,” were displayed all throughout the Pahrump Valley by Lee, according to the lawsuit.

According to the lawsuit, Gulley and Marshall “had express permission from landowners Eric Peterson and Jan Jansen to remove the political signs in question.”

The lawsuit alleges then detective David Boruchowitz, “falsely and with reckless regard for the truth, claimed that plaintiff Ben Gulley had been illegally removing the political signs, despite having knowledge that he had permission by the land-owners to remove them.”

The lawsuit contends, that “this conduct constitutes egregious violations of the plaintiff’s first and fourth amendment due process rights. The defendants acted with deliberate indifference to plaintiff’s due process rights and with reckless disregard for the truth by orchestrating a plan to take down, detain, arrest plaintiff Gulley even though he was completely innocent of any crime, the document stated in part.”

Brent Huntley, an attorney for the Nye County Law Enforcement Association, a union for which Boruchowitz, who is now a sergeant, is president, disputes the claims contained in Gulley’s lawsuit.

Gulley told the Pahrump Valley Times last week that the way he was arrested, which the lawsuit said was a felony stop with guns drawn, was one of the more troubling aspects for the sheriff’s office volunteer.

“It was just about every sheriff’s officer that was there,” he said of the arrest at 7:15 p.m. two years ago. “They had the street crimes unit out there, they had detectives, undercovers and all of the patrol cars. Just about everybody was there. Someone could have robbed the bank and probably gotten away with it, because it seemed like everybody was out there.”

Gulley said he thought the arrests were politically motivated, as Marshall was a candidate for sheriff.

“Everybody knows what that was all about because they did not want Rick to become sheriff,” Gulley said. “It’s very simple. I’m doing this for justice. I want the real truth to get out there because the truth is not out there.”

As a result of the ordeal, Gulley said the events of that evening changed the way he and his wife of 50 years, go about their daily routine.

“After I got out of the jail, I didn’t want to leave my house because that was easily one of the most embarrassing things that has ever happened to me,” he said. “We were treated like common criminals and we’re not.”

Medina, Scott and Gelson are no longer with the department.