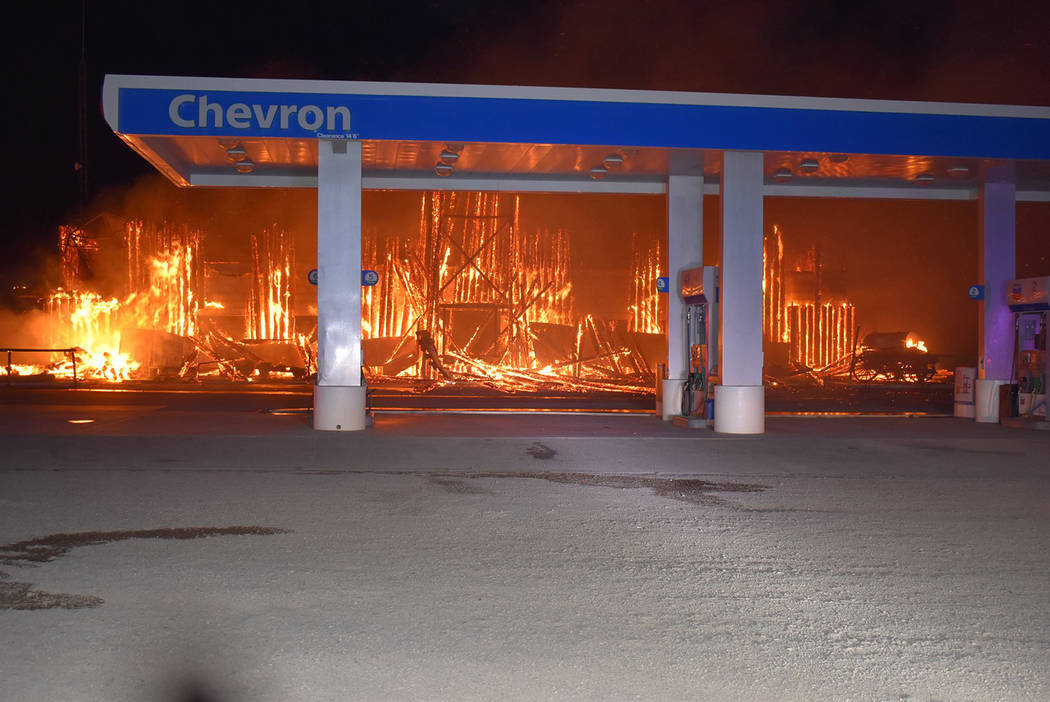 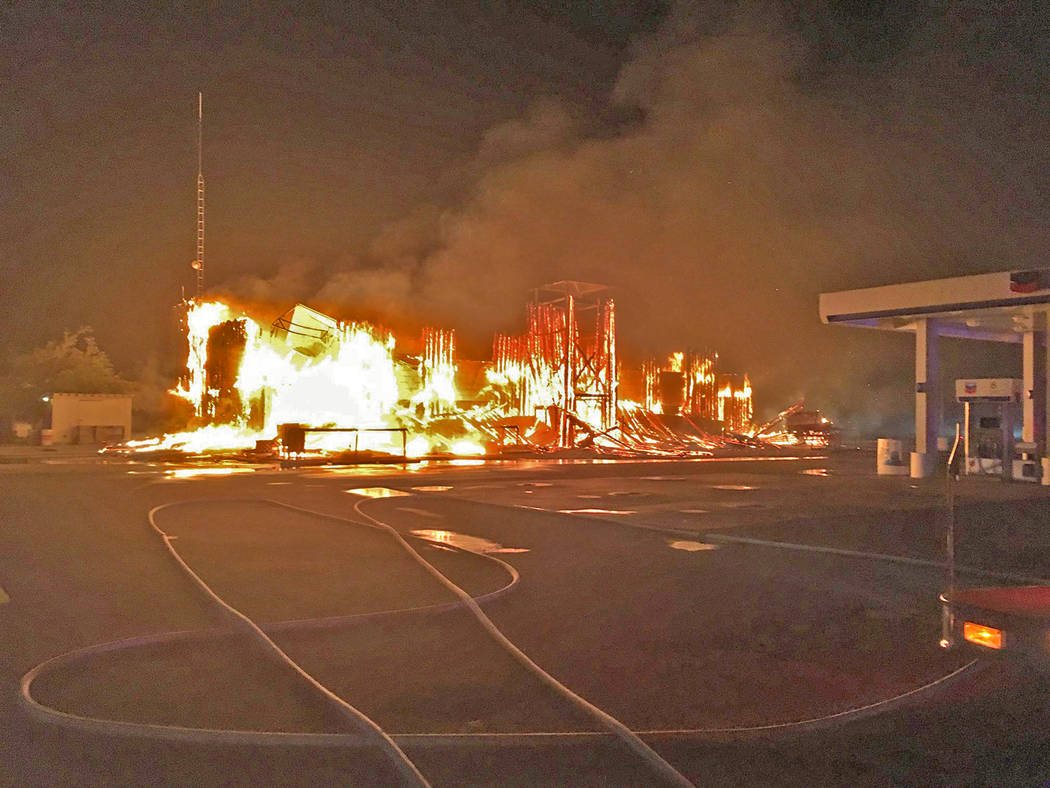 James Attebury/Special to the Pahrump Valley Times This photo shows the fire at Fort Amargosa, which was destroyed in the fire. 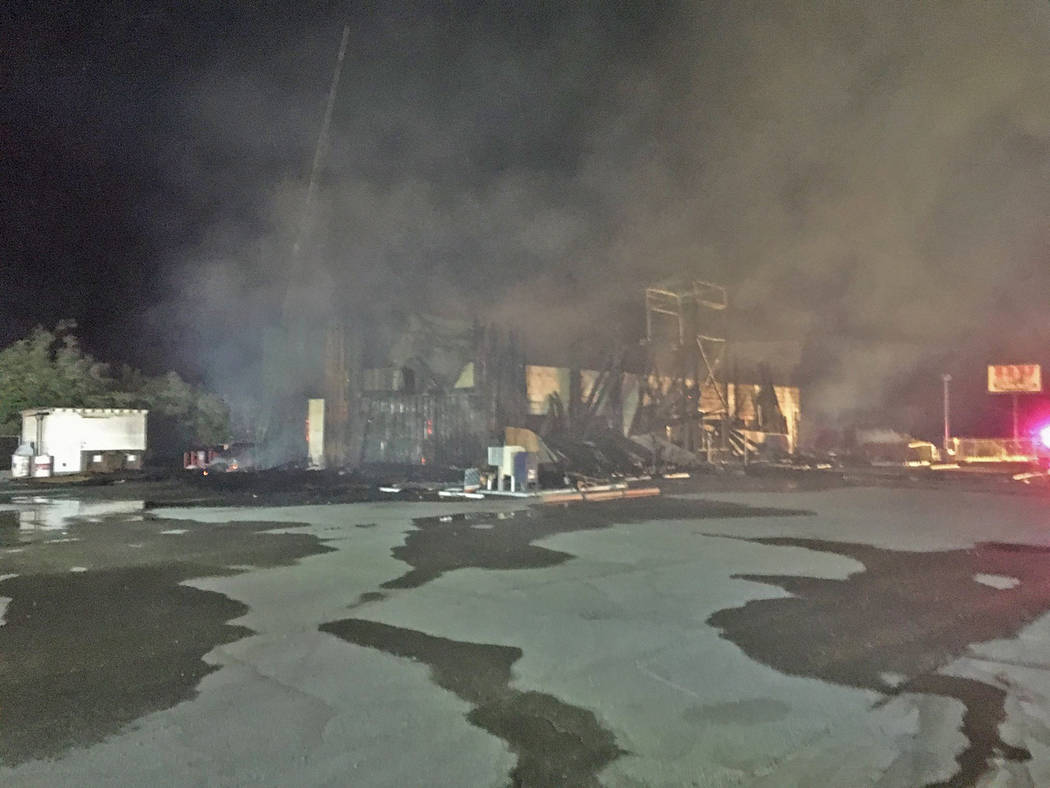 James Attebury/Special to the Pahrump Valley Times Smoke is shown at the scene of the Fort Amargosa fire, which was reported about midnight Saturday. 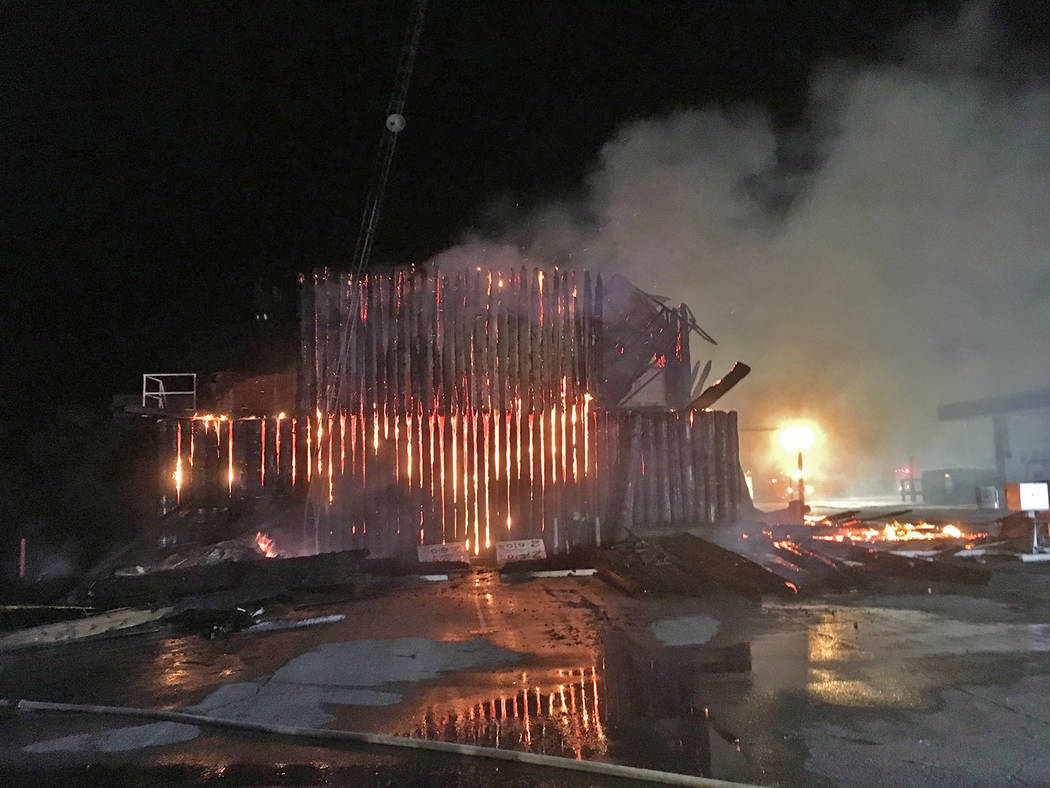 James Attebury/Special to the Pahrump Valley Times Fire at Fort Amargosa, which was home to a convenience store, restaurant and gas station. 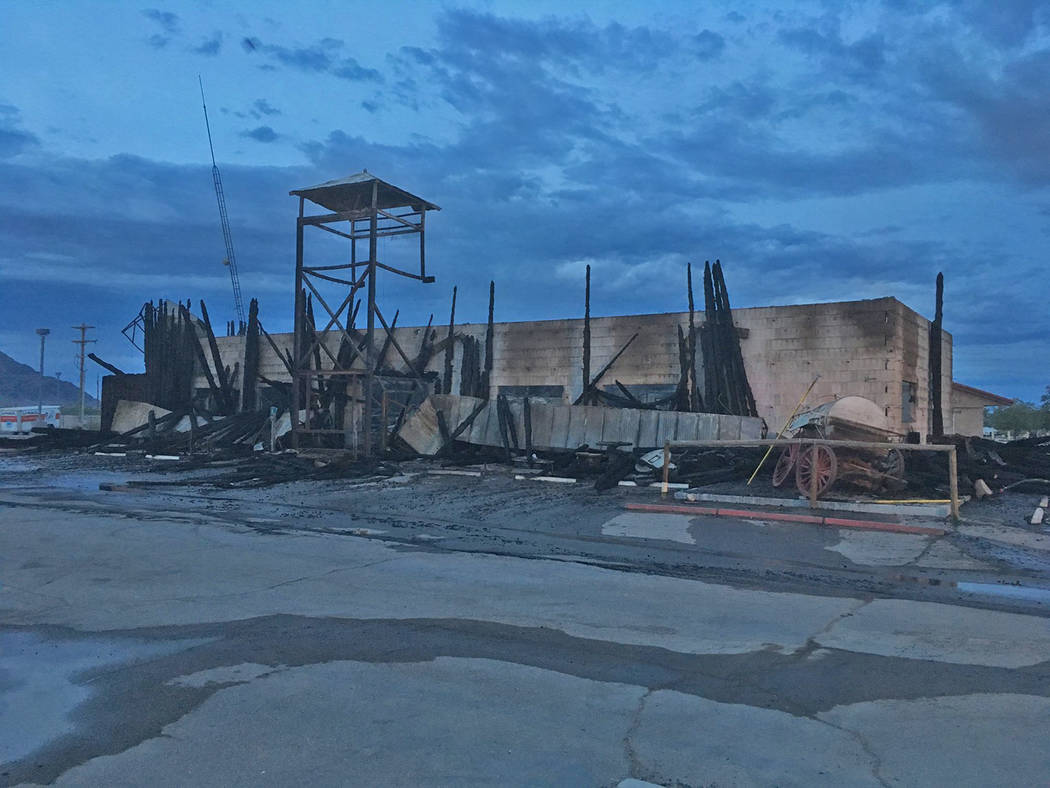 James Attebury/Special to the Pahrump Valley Times This photo shows the scene in the aftermath of the fire at Fort Amargosa. 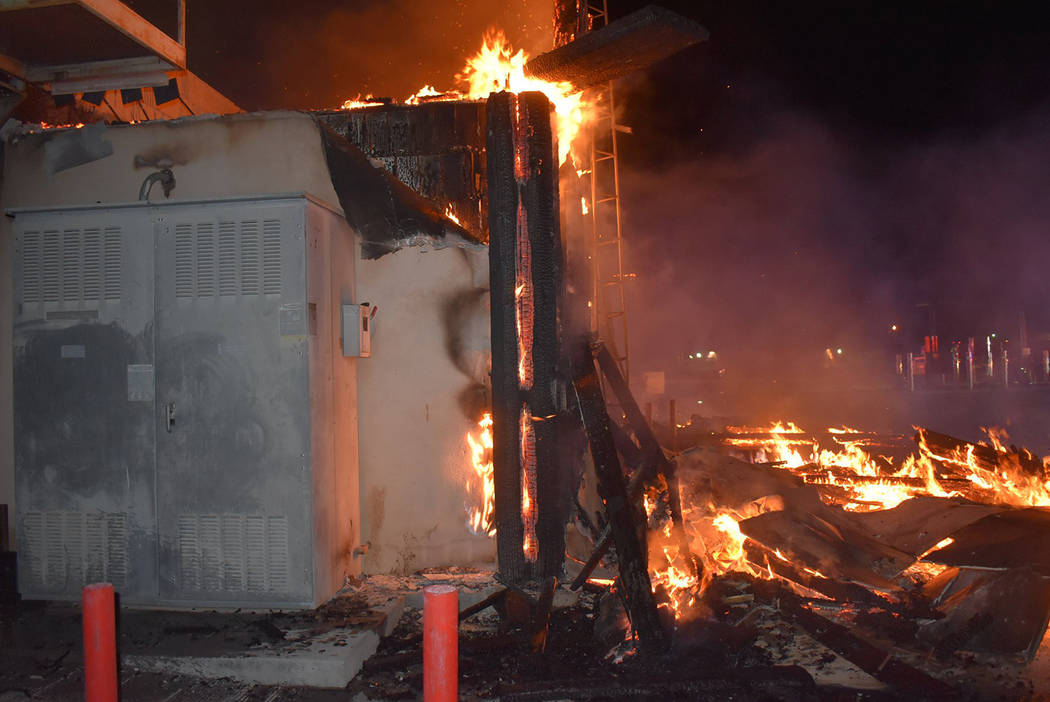 Photo provided by Nye County government A look at the flames as they burned at Fort Amargosa off U.S. Highway 95 in Nye County. 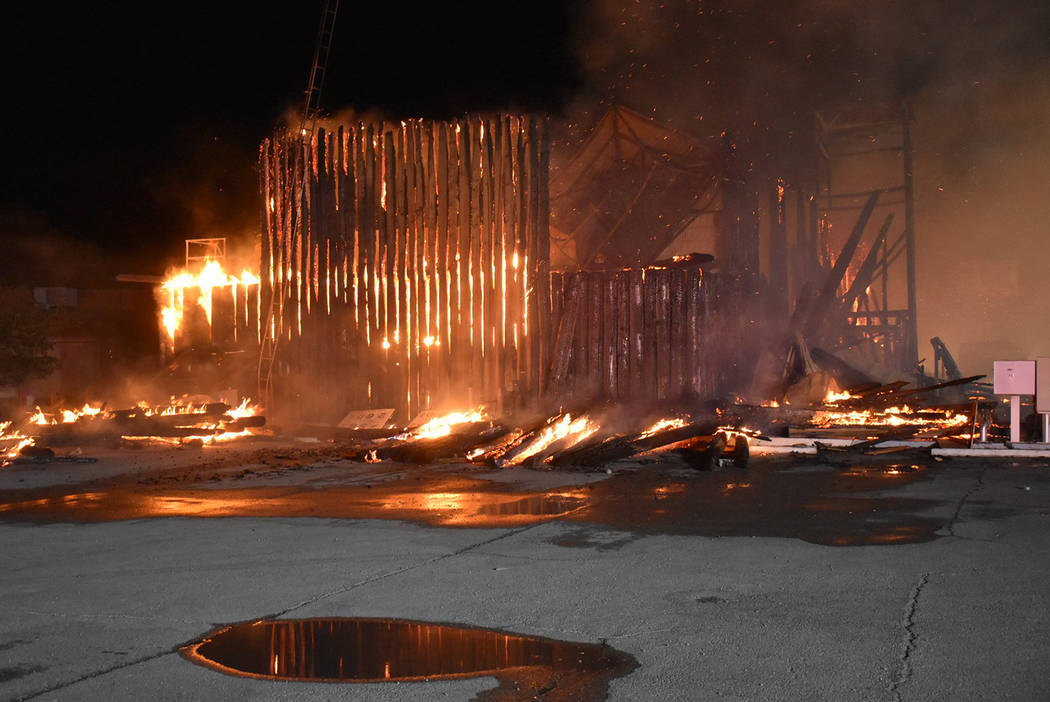 The investigation is continuing this week into the cause of a late-night fire that destroyed Fort Amargosa off U.S. Highway 95.

“The structure was already fully engulfed when we arrived and we did the best we could to protect the exposures,” he continued. “Thankfully, no one was injured and the fire did not spread to the gasoline pumps or RV park. Please pray for all of those affected by this tragedy.”

The fire was reported about midnight Saturday at 2642 E. Highway 95 about 35 miles northwest of Pahrump.

Firefighters from throughout the region, including Amargosa Valley, Pahrump and the Nevada National Security Site battled the flames.

The fire was brought under control in about 90 minutes though it continued to burn.

The underground fuel tanks, the county reported, were never compromised.

“It could have been even more catastrophic,” Chief Scott Lewis of the Pahrump Valley Fire and Rescue Services said Monday in praising the work of firefighters at the scene.

He said that water was an issue because the on-site yard fire hydrant was in a “collapse zone” close to the fire area. Fire equipment dispatched from Pahrump included a tender to assist at the scene.

Fort Amargosa, built to look like an actual fort, featured a wood facade and cinderblock, Lewis said, adding that the complex was significant structure along the Highway 95 corridor.

“It has great (economic) value to the community,” he said.

That point was emphasized by Nova Daniels, who shared fire photos and video via Facebook. “Myself amongst many other co-workers are in need of employment, help, or assistance,” she wrote on the Jobs in Pahrump site.

Chief Lewis said that officials with the Nevada State Fire Marshal’s Office were investigating the fire’s cause. Heavy equipment was being brought in to assist with the efforts, he said.

This is a developing story. Check the Pahrump Valley Times and pvtimes.com for updates as more information becomes available.