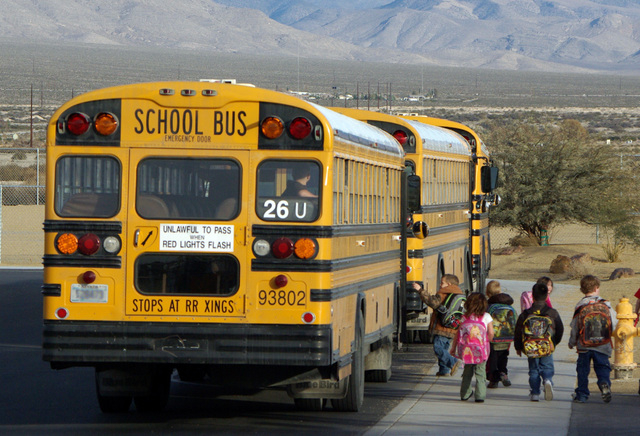 Get ready, Nevadans, for the blitzkrieg about to unfold for your vote on the Education Initiative appearing as Question 3 on the November ballot.

Opponents of the measure spurred by the state teachers union have raised $2.2 million to fight the proposal — nearly twice as much as supporters — and there’s more where that came from to flood the airwaves and mailboxes with advertisements urging defeat.

It’s expected to be one of Nevada’s most expensive ballot measure battles in recent memory.

“We know that it takes a full-scale advertising campaign to defeat Question 3,” said Karen Griffin, spokeswoman for the Coalition to Defeat the Margin Tax Initiative. “That’s because the proponents have such a simple and effective message.”

That message is money for Nevada’s K-12 education system.

“This is about funding K-12 education adequately,” said Dan Hart, spokesman for Education Initiative organized by the Nevada State Education Association. “It’s about large corporations, the largest 13 percent of businesses in Nevada, paying their fair share for our kids’ education.”

Contribution reports filed with the secretary of state’s office show big business — casinos, retailers, car dealers and business organizations — have pumped the most into defeating the tax.

The Nevada Resort Association and its political action arm representing the state’s largest casinos have contributed $571,000 to the effort as of the last report filed on June 6. The Las Vegas Metro Chamber of Commerce and its affiliates account for $573,000. Nevada retailers have ponied up nearly $300,000; the Nevada Mining Association, $225,000.

Neither side would discuss how much they’ve raised over the past three months. Those tallies will be included in the next financial report due Oct. 14, just four days before early voting begins.

A poll conducted by SurveyUSA for the Las Vegas Review-Journal and released Thursday showed the measure is a statistical toss-up, with voters opposed holding a narrow edge of 40 percent to 37 percent in favor. The spread is within the margin of error of 4.2 percentage points. The poll also showed about 23 percent of voters have not decided how they will vote — and there will be lots of campaigning to try to sway them.

The Education Initiative, also called the margins tax, would impose a 2 percent tax on businesses generating more than $1 million a year in revenue — not profit. Tax amounts would be calculated on either 70 percent of total revenue, or total revenue minus the cost of goods sold or employee compensation plus benefits, capped at $300,000 per employee.

Businesses that take in less than $1 million would be exempt, but critics argue even businesses that lose money would be subject to the tax and that the threshold is misleading.

There is no exemption for the first $1 million in revenue, which would create a “fiscal cliff” for businesses that make even just $1 above that, she said.

“For businesses struggling to keep their doors open, this tax may prove the proverbial straw that breaks the camel’s back,” Vilardo wrote.

Economists say the number of possible lost jobs is hard to determine and that some losses would be offset by gains in the public sector.

The powerful Culinary Union also came out against the tax on revenues, saying it will “significantly reduce the amount of money employers have available for employee wages and benefits” and for resort expansions and upgrades. In a statement, it said the union education funding is a top priority for the state and it will work with legislators “to support broad-based equitable and stable revenues” for education.

Various economic analyses of the measure estimate the tax could generate $500 million to around $800 million a year for public schools.

They also argue the measure does not guarantee more money for education. While the initiative requires taxes collected to be deposited into the state Distributive School Account — reserved for K-12 spending — critics say state lawmakers could reduce the amount of general fund revenue funneled into the account, offsetting any gains.

A separate group opposed to the initiative, NVJOBS political action committee, has raised little money so far but is distributing mailers urging a no vote. The ads argue the measure “provides no accountability, such as improvement in education standards,” and that “damaging an already fragile economy with a massive tax hike does not help children or their education.”

“We’re going on TV next week and we’re not coming down,” Hart said, conceding supporters are likely to be outspent.

“I think our opponents are far more well-funded than we are,” Hart said. “They have big corporations who have very deep pockets. They’ll spend whatever they think it will take to avoid paying taxes.”

“This November, let’s pull together and do what’s right — let’s choose our own future instead of letting shady business groups call the shots,” the Education Initiative states on its website. It adds, “We must provide children with an opportunity for a quality education, help them achieve their potential and improve the future for all Nevadans.”

The concept of a margins tax was first floated by Democratic leadership during the 2011 legislative session, though it was introduced late in the game and went nowhere. The teachers union then took up the cause, collecting nearly 150,000 signatures — more than twice the number required — to keep the effort alive.

State lawmakers in 2013 took no action on it, sending it to this year’s ballot.

While Democrats and the Nevada AFL-CIO supported the initiative’s concept at the outset, they’ve abandoned that backing, agreeing that it would be bad for business and the economy.

The about-face does not surprise Hart.

“The reason we’re on the ballot is because politicians haven’t done their job as far as funding education appropriately,” he said. “So is it a surprise that politicians are more concerned about their campaign contributions than they are about this issue? No.”

If approved by voters, the tax would take effect Jan. 1 and could not be altered for three years.