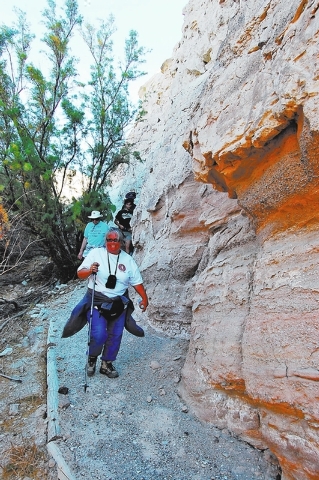 TECOPA, Calif. — A first annual fundraiser by the Amargosa Conservancy set for Saturday will raise funds to supplement a $299,000 state of California grant for a five-mile walking trail from China Ranch Date Farm to the lower Amargosa Canyon.

The event is scheduled from 5 p.m. to 9 p.m. at the China Ranch, in which conservancy members will hold a groundbreaking for the Amargosa Canyon trail head. The cost is $50 and includes admission, food, music and a thank-you gift.

The trail will be handicapped accessible and will restore about 25 acres of habitat, over four miles of the historic Old Spanish Trail through Amargosa River Canyon and create several connections to existing trails on U.S. Bureau of Land Management property. The grant will fund picnic tables, vault toilets, a water bottle refilling station and an interpretive kiosk at the trailhead.

It was one of 33 river parkway projects in California to be awarded over $34 million in funding last November. The projects are designed to create recreational opportunities for families, restore fish and wildlife habitat, provide flood management and otherwise enhance California’s river parkways. The grants fund more than 31 miles of trails and 7,500 acres of wildlife habitat restoration and land acquisition.

The program is funded by the passage by California voters of Proposition 84 in 2006.

Brian Brown, owner of China Ranch and resource advocate for the Amargosa Conservancy, said they hope to raise $4,000 to $5,000 to help maintain the trail. He said nonprofits like the conservancy often can obtain specialized state or federal grants restricted to very specific uses. The fundraiser would generate more unrestricted funds.

“They wanted to spend some of this bond money east of the Sierra Nevada,” Brown said of the grant. “They sent teams out here a couple of times from Sacramento. We told them the history and showed them the canyon. They loved it.”

Brown said China Ranch gave a 25-year easement to the conservancy to access the trailhead. Donors pledging at least $500 to the project will be included on a commemorative plaque to be inset into a special mosaic monument depicting wildlife and plants of the area.

In the spring 2013 Amargosa Conservancy newsletter, former executive director Donna Lamm wrote: “The ecological, historical, and anthropological significance of the Amargosa Canyon is unparalleled in the Mojave Desert. There is evidence that humans have occupied the area for more than 8,000 years. Just over five miles in length, beginning at China Ranch with a picnic area and interpretive kiosk, the trail will reach the designated wild segments of the Amargosa River Wild and Scenic River corridor and will extend past the confluence of Willow Creek and the Amargosa River. Currently the area is overgrown and mostly inaccessible. Construction will also include removal of invasive tamarisk, which consumes large amounts of groundwater.

“The trail will follow parts of the route of the Old Spanish Trail and the grade of the Tonopah and Tidewater Railroad, which was built in the early 1900s. Historical figures such as John C. Fremont, Kit Carson and Brigham Young once traversed this area. This beautiful riparian area also supports an abundance of sensitive and endemic species of birds, fish, plants and mammals. Working in partnership with the Bureau of Land Management, the conservancy will soon provide access to this incredible hidden jewel.”

Lamm, who served as part-time director of the conservancy for several years, was replaced by Jordan Kelley in April, who became the first full-time executive director. The grant is one of the latest accomplishments of the Amargosa Conservancy, which continues to make impressive strides since it was formed in September 2005.

An Omnibus Public Lands Bill passed by Congress in 2009 included the designation of wild and scenic river status for the Amargosa River, a major goal of the Amargosa Conservancy. At that time, resource coordinator Brian Brown said the conservancy was working with the state of California to cut a recreational trail from the China Ranch Date Farm to Amargosa Canyon. There has also been talk about a 17-mile hiking trail from Shoshone, Calif. to Dumont Dunes using the old rail bed from the Tonopah and Tidewater railroad.

The National Wild and Scenic Rivers Act of 1968 called for certain rivers to be preserved in free-flowing condition and their immediate environment. The segment from Shoshone to the Amargosa Canyon is listed as “scenic” meaning it’s mostly primitive but has access by road.

The Amargosa Conservancy also received a $250,000 grant to do a water assessment study in the Shoshone-Tecopa area. Lamm said consultants sampled and measured springs and seeps in the area and took geochemical samples. The majority was funded by the Resource Legacy Fund Foundation, she said.

Lamm said the conservancy found out it will take less than $150,000 to provide water to Tecopa, Calif. that meets drinking water standards and provides adequate fire flow. That will be another upcoming project by the conservancy.

In May 2006, the conservancy acquired the historic old Tecopa property at the head of Willow Creek, a tributary to the Amargosa River.

Dress for the Saturday fundraiser is “conservancy casual,” closed-toe shoes or boots and a jacket are recommended. Pastel’s Bistro in Tecopa will be catering the event. Live music will be provided by “The Dust Devils.” A silent art auction is scheduled.

China Ranch owner Brian Brown will lead a walking tour of the date farm before the ceremonies at 4 p.m. Saturday.

Tickets may be purchased at www.amargosaconservancy.org or attendees may RSVP to trailheadrsvp@gmail.com. The Amargosa Conservancy Development Director Suzanne Hackett-Morgan may be contacted at 702-449-8688 for donations.