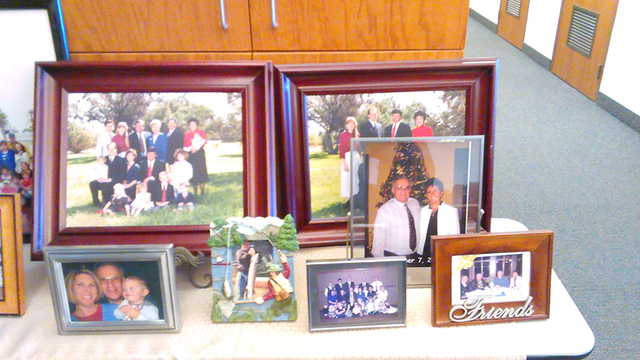 Photographs and memories were shared by family and friends during Ray Wulfenstein’s funeral service on Saturday afternoon. Wulfenstein was laid to rest at Grandview Cemetery alongside his wife of 60 years, Irene. Selwyn Harris/Pahrump Valley Times 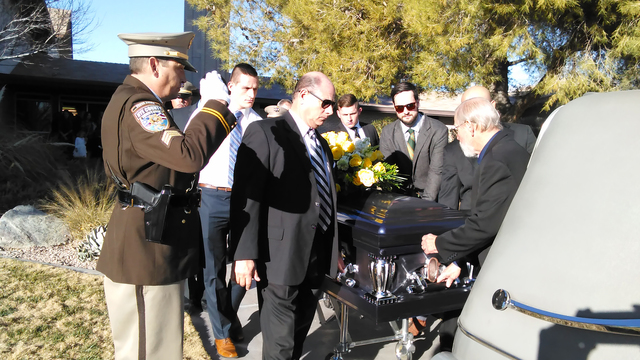 A Nye County Sheriff’s deputy salutes the coffin of Ray Wulfenstein following Saturday’s funeral service at the Church of Jesus Christ of Latter-day Saints on Wilson Road. As one of the founding families of Pahrump, Wulfenstein moved to the valley in 1972 where he started a small motel business when Highway 160 was nothing more than a lonely deserted road in the middle of nowhere. Selwyn Harris/Pahrump Valley Times

There was no shortage of tributes to Ray Wulfenstein during Saturday’s funeral service at the Church of Jesus Christ of Latter-day Saints on Wilson Road.

Several hundred residents and friends of the Wulfenstein family gathered to learn more about the man from those who actually knew him.

Both of Wulfenstein’s sons, Jim and Steve, spoke of their father’s determination to lead a full, meaningful existence.

Steve Wulfenstein noted that horsepower, speed and headlines partly summed up Wulfenstein’s life as a race car driver, aircraft pilot and developer in the community.

Following the service, son-in-law Michael Colucci said Wulfenstein made a commitment to work hard after growing up on meager means.

“When he was a young boy in Lakeside, Oregon his family was pretty poor,” he said. “He came from that side of the tracks many years ago. He made a commitment to work very hard in order to live on the other side of the tracks. He was a very driven individual. That’s for sure.”

Additionally, Colucci said his father-in-law made a pledge to eventually move back to Oregon and live much differently than how he was raised there.

“He made a commitment to have the nicest cabin on the lake when he decided to move back,” he said. “Sure enough, he made that commitment, because it’s pretty spectacular. I’m not sure if that is something you are born with or you develop years later.”

Among those who provided additional remarks during the service were daughters Judy Maughan and Cindy Colucci, who delivered the eulogy for their father.

The song “Country Roads,” performed by grandson Michael R. Colucci, was followed by the hymn “Hallelujah,” sung by granddaughters Rachel and Sabrina Maughan.

Additional musical numbers including “I am a Child of God,” along with “Amazing Grace” were performed before the closing hymn, entitled “Nearer My God to Thee.”

The service’s closing prayer was delivered by son-in-law Douglas Maughan.

Following the service, a funeral procession carried Wulfenstein to his final resting place, beside his wife Irene at Grandview Cemetery.

Earlier this month, Wulfenstein was looking forward to flying again after an extended period away from the pilot’s seat.

He was killed in a single-engine plane crash in southern Oregon on Jan. 13. Wulfenstein was solo flying his single-engine Cessna when it crashed on a beach in Curry County.

Oregon State Police said the U.S. Coast Guard dispatched a helicopter to search the area after overhearing a distress call between a pilot and the FAA.

They found the wreckage and alerted first responders. It is believed he suffered some sort of medical issue prior to the crash.”

Wulfenstein moved to Pahrump in 1972 where he started a small motel business when Highway 160 was nothing more than a lonely deserted road in the middle of nowhere.

That business grew into an RV park, car wash, land development and a construction company that bears the family name.

Magee was killed in a flying accident in December 1941.

“Oh, I have slipped the surly bonds of earth,

And danced the skies on laughter-silvered wings;

Of sun-split clouds, —and done a hundred things

You have not dreamed of —Wheeled and soared and swung high in the sunlit silence.

Hov’ring there, I’ve chased the shouting wind along, and flung my eager craft through footless halls of air.

Up, up the long, delirious, burning blue I’ve topped the wind-swept heights with easy grace where never lark or even eagle flew.

And, while with silent lifting mind I’ve trod the high un-trespassed sanctity of space, put out my hand, and touched the face of God.”