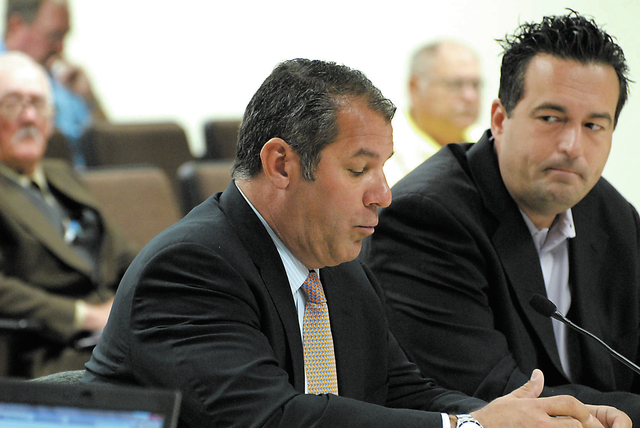 Executives from Pahrump casinos Tuesday endorsed a bill doubling the number of hotel rooms that have to be built to obtain a non-restricted gaming license.

But when they left after county commissioners passed it by a 4-1 vote, District Attorney Brian Kunzi said the board will have to reconsider the item. Kunzi said commissioners ended up passing a draft bill instead of a final version. There won’t be substantive changes in the final version, he said, instead it’s more semantics, the terminology needs to conform to state guidelines.

Existing county law allows casino operators to have a non-restricted gaming license allowing them to have more than 15 slot machines and offer table games and a sports book, but they have to provide at least 45 rooms. There are 11 non-restricted gaming locations in Nye County, according to monthly reports from the Gaming Control Board.

The tightening of regulations was seen as an attempt to get more hotel rooms in Pahrump.

Commissioner Dan Schinhofen, who introduced the item, said it would only affect anybody in the future seeking a non-restricted gaming license, which he said is a privileged license. It wouldn’t affect existing casinos.

“I talked to local businesses that would be affected by this, none of them are against this,” Schinhofen said. His original proposal was to require 100 rooms.

“If you want an unrestricted gaming license you have to give us at least 90 rooms. We have restrictions on other bars, we have restrictions on other gaming establishments, this is just an adjustment in the regulations so those who want an unrestricted casino not to come in on the cheap,” Schinhofen said. “We need hotel rooms, we have plenty of casinos.”

Sean Higgins, an attorney for Golden Gaming Casino group, said Carson City, a similarly sized community which has a population of 55,000 residents, has a 100-room hotel requirement for non-restricted gaming licenses. West Wendover, a small community on Interstate 80 and the Utah state line, requires 150 rooms, he said.

Gregg Schatzman, general manager of the Saddle West Hotel and Casino, who said he is a former chief of investigations for the Gaming Control Board here and held senior executive positions throughout Ameristar Casinos, endorsed Higgins’ comments.

“I’ve known him for a number of years. I think this makes a lot of sense,” Schatzman said.

Existing hotels that don’t meet that requirement would be grandfathered in. The Pahrump Nugget opened in 2001, it has 69 hotel rooms, the Saddle West opened 41 years ago, it has 155 rooms. The owner of Irene’s Casino, Mike DeBauche was also present at the meeting, that restaurant and casino was built on the site of the former Cotton Pickin’ Casino which was grandfathered into the regulations.

“Anything that further restricts any kind of economic development is not in the best interest of encouraging more business to Nye County. I agree we need more rooms in Pahrump, I don’t believe this is the way to do it. I would encourage any business to come in and bring 20 or 30 rooms. I think that’s fantastic regardless of what it has to do with gaming,” Wichman said.

“What you’re doing is eliminating any opportunity for anyone outside of Pahrump to have an unrestricted gaming license unless they have rooms involved,” she said.

In his motion, Schinhofen said the requirement for 90 hotel rooms would only be required inside the Pahrump Regional Planning District, elsewhere the requirement would remain at 45 rooms. Kunzi added the existing ordinance mandating 45 hotel rooms only addresses communities of 5,000 or more people.

County Commission Chairman Butch Borasky noted the existing minimum room requirement has been in effect a long time, since 1995. That would have been the same year Terrible’s Town Casino opened and four years before Terrible’s Lakeside Casino.

County Manager Pam Webster said recently a developer is interested in building a 100-room hotel in Pahrump. That is in addition to plans at Spring Mountain Motor Sports Ranch for a hotel, where owners had planned to build a hotel previously.